NASCAR could go further still with its downforce reductions to improve the quality of Sprint Cup racing, reckon Denny Hamlin and Carl Edwards

The series is trying a variety of rules adjustments to increase overtaking this year, with a lower-downforce package making its debut in last weekend's Kentucky Speedway race.

That was hailed as a success after the number of overtaking moves increased from 1147 in the 2014 Kentucky race to 2665, with an event-record of 22 lead changes under green flag conditions.

"I could actually drive the car, I was steering and sliding, I just about wrecked a few times. I felt like I was doing something, not just sitting in line.

"To me, that spoiler cannot be small enough."

Hamlin, who finished third last weekend, said there was a clear reduction in the amount of turbulent air disruption when following other cars.

"It didn't affect my car nearly as much as it did before," he said.

"Now, I think we can make it better. I think this is just a first little bits and pieces.

"But I don't think we need to shove in anyone's face, especially NASCAR, that, 'hey, look, we were right', because it's up to the fans and the media to tell us whether it was a better race or not."

NASCAR is also trying a higher-downforce package for the larger tracks at Indianapolis and Michigan in the hope of achieving a similar effect.

Penske driver Joey Logano is optimistic about the changes for Indy in particular, and feels it is vital that NASCAR improves its product at the world-famous track. 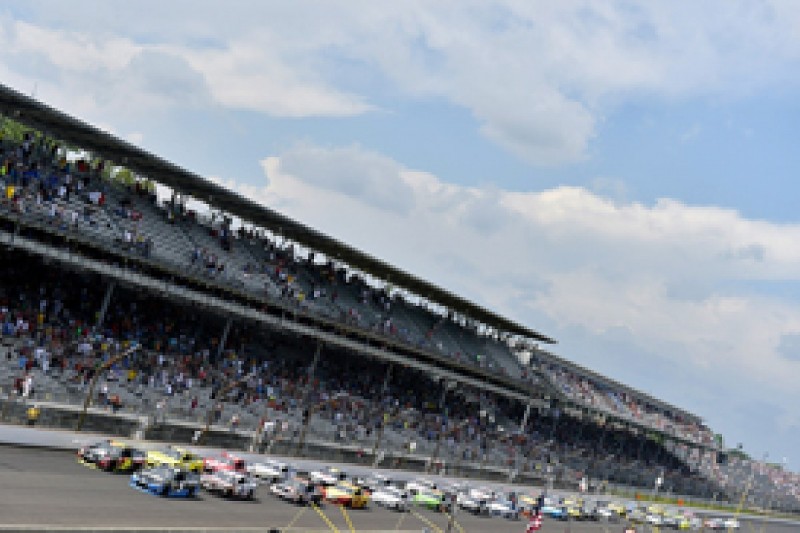 "I look at Indy as one of the crown jewel events of NASCAR," he said.

"We can't afford to have a bad show and I feel like we have had some not very good racing there in the past.

"There's not a place that we can get clean air to try to catch up to cars in front of us, it's a single groove racetrack.

"You look at IndyCar, that's one of their best races, because they can draft down the straightaways and I think that's what we're going to try to do at a racetrack like that.

"We're talking a nine-inch spoiler and that's huge. That thing's going to be pushing a boulder through the air."

Although keen for NASCAR to keep experimenting, Edwards cautioned that stability would be required when the Chase title playoff begins in September.

"As you get towards the Chase and you start to determine a champion, I'm sure NASCAR doesn't want to make a mistake and try something too crazy or too outside the box and mess up the racing," he said.

"But I would be all for trying whatever we can before the Chase starts."

NASCAR has also announced that it will use the superspeedway variant of its qualifying format at Michigan and Indianapolis, with cars running one at a time in quick succession rather than in groups.