NASCAR announced earlier in the week that from the first race of the Chase officials would be more rigorous in penalising failures of the Laser Inspection System (LIS) dimensions measurement and lug nut checks.

In addition to the usual fines, points deductions and crew chief suspensions, NASCAR said it was now willing to rescind a winning driver's automatic place in the next Chase stage if the violation was deemed to class an 'encumbered finish'. Rear toe measurements are a particular focus of the crackdown.

Both Truex and fellow Chase contender Jimmie Johnson - whose Hendrick Chevrolet fought for victory but dropped to 12th after a late pitlane speeding penalty - failed two LIS checks at Chicagoland.

But it was decided that the infringements on the cars of Johnson and Truex were not severe enough so the latter still progresses to the 'Round of 12' with his victory.

Any further penalties for the cars that failed LIS scrutiny will be announced later in the week.

After a race in which he was consistently one of the fastest drivers but had to fight back from a lap down following an early tyre problem, Truex was full of praise for the Furniture Row team. 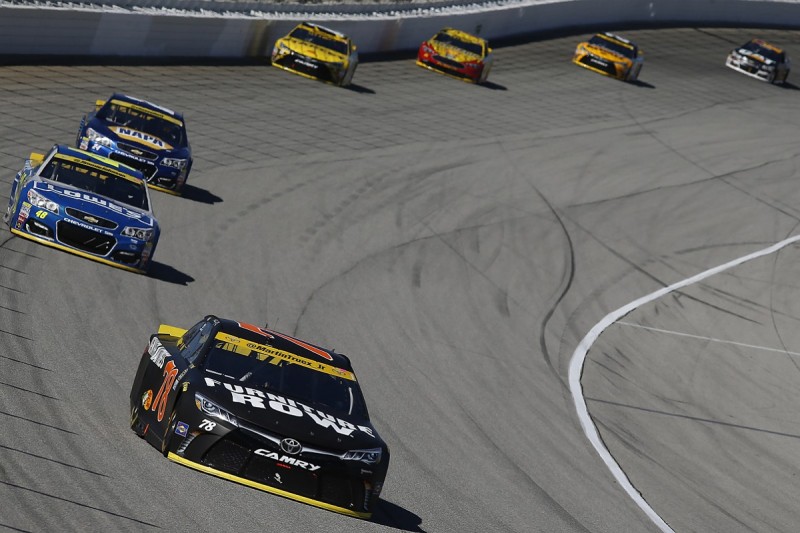 "Without doubt it's the best team I've ever had," said Truex, whose Chicagoland win was his sixth at Cup level and third this year.

"Right now, I feel like any racetrack, any weekend, anywhere in the country we can win.

"It's just so much fun to go to the racetrack and have that feeling, have that much confidence in your team and what you're doing."

"Cole just kept me updated on who the leader was, who was a lap down and where I had to get to," said the Chase leader.

"It wasn't easy to pass out there but our car was really good on the long runs. That's where we were able to make time.

"It was trying to be patient on the short runs, on the restarts, try to keep my tyres under me, and wait for those guys to start fading to then make my move."

At one stage Truex and Kevin Harvick made contact as they battled to get into the 'free pass' position for the highest-placed lapped car, Harvick having been lapped while pitting under green just before a caution was called.

Truex claimed Harvick hit him "on purpose", while Harvick - who could only finish 20th - declined to answer reporters' questions after the race.