With just 10 laps of the scheduled 400 left to run, Brad Keselowski spun his Penske Ford into the pitlane with a flat tyre, which brought out the 17th caution of the longest race on the Cup calendar.

Truex's brush with the wall had come early in the race, at a time when the Toyota teams appeared to be struggling, and it forced him to pit for attention.

But he moved back into contention as the night progressed and won the third of the race's four stages.

In the caution for Keselowski's spin, Truex led the charge for fresh tyres and restarted for the final sprint to the flag in third place, behind David Ragan - who hadn't pitted - and Ryan Newman, who only took on two new Firestones. Both were quickly overcome by the #19 Toyota.

Joey Logano put pressure on Truex but he was able to navigate the final five laps to claim his third win of the season, and third from the last five 1.5-mile track. 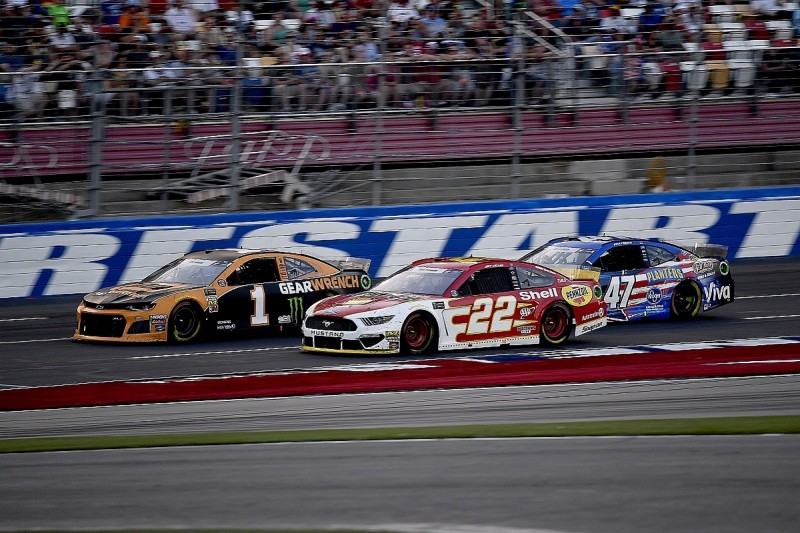 Logano, seeking a double for Roger Penske's eponymous squad after Simon Pagenaud's win at the Indianapolis 500, was forced to settle for second, having run as low as 20th early in the race as he struggled to find an acceptable balance in the #22 Ford.

Kyle Busch started and finished in third for JGR, surviving contact late in the race with brother Kurt and leading 79 laps as he claimed a seventh top three finish of the campaign, having promised his #18 team a top 10 finish.

Having become the youngest pole-winner in the 60th running of the race on Memorial Day, William Byron fell to ninth at the flag for Hendrick, but did keep Kevin Harvick behind. Harvick's race was compromised twice by pitting moments before the caution was deployed.

Keselowski dominated the first two stages of the race and looked set to take his second successive win, but being put onto scrubbed tyres at the beginning of stage three meant he wasn't a factor thereafter, coming home in 19th.

Strategy gamblers Ragan and Newman fell back to 15th and 16th respectively, just ahead of Denny Hamlin who survived a heavy shunt on the final lap.