Busch became the second driver after Stewart-Haas Racing's Kevin Harvick to win three races in a row in 2018 after his victory at Richmond last weekend.

A win is enough to guarantee one of 16 places in the post-regular season playoff, unless more than 16 drivers win a race, with any remaining slots filled by the highest-placed regular season points scorers without a victory.

Drivers are then eliminated from each round of three races until there are four drivers vying for the championship at Homestead.

When asked if he had ever had as much momentum in his career, Busch said: "No, and I certainly would love to be doing this if this was week 10 of the playoffs we'd be talking about something pretty cool, but I hope it's not peaking too early.

"Obviously this is way early in the season. We've got a long way to go."

Busch said running his Kyle Busch Motorsports team in the lower tiers of stock racing helped give him an edge on his rivals.

"The last three weeks have been really special," he said. "Short tracks I feel like are one of my better-suited racetracks, one of my specialities.

"I love racing anywhere, but the short tracks kind of seem to fit in my wheelhouse.

"I love running my super late model [stock car] teams, [it can] give me a chance to run some more short tracks throughout the year, maybe gives me that little bit of an upper edge for how cars need to be at slower speeds, bullring type racetracks.

"It's been a great year thus far. We had a rough start at Daytona [Busch crashed out]. [But] from there on out, we've been really strong." 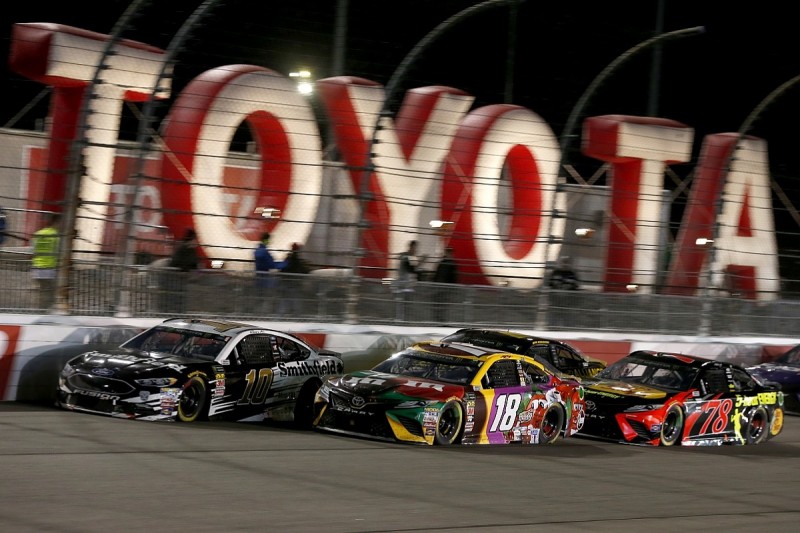 Busch added that a fourth win in a row would be more challenging because of the randomness of restrictor-plate racing at Talladega.

"That one's never really always in the driver's hands," he said. "It's kind of always in fate's hands. We'll just take what we can get.

"I don't know if you can shoot for four in a row.

"It's hard to go to Talladega with that much of a winning streak and think that you can go to victory lane, but we're going to go there anyway and give it a shot."