Kevin Harvick's career-best NASCAR Cup season still has one more race, but it won't include a chance at a second championship having been knocked out of title contention at Martinsville.

Coming off a subpar finish at Texas Motor Speedway the previous weekend, Harvick entered last Sunday's race at Martinsville Speedway with a 42-point cushion over the cut-off to advance to the title race.

After a myriad of problems during the race, Harvick's title hopes came down to the final of 500 laps, but his efforts to turn Kyle Busch and pick up another spot in the running order didn't turn out well.

Both drivers spun, but Busch was able to continue on, while Harvick ended up credited with 17th place, the last car on the lead lap.

"Look, these championships aren't like winning like [Richard] Petty and [Dale] Earnhardt used to win them," he said.

"We just weren't good and everybody on our (team) just kept battling to make it better and gave ourselves a shot there at the end. I tried to drive into the door [of Busch] to get that last point to make it and spun him out.

"I don't usually drive like that, but you're trying to make it to the championship four and doing everything you can. I just came up short. Just not the night we needed."

Despite the disappointing Martinsville result and losing a shot at the championship, Harvick admits his strong season has made it easier to stomach.

"I've been punched in the gut a lot harder," he said.

"We won nine races, had a great year, and, like I said, the championship is kind of a bonus. It would be great to win it, obviously, but I'd rather go through the year and win races and do the things that we did and just came up short." 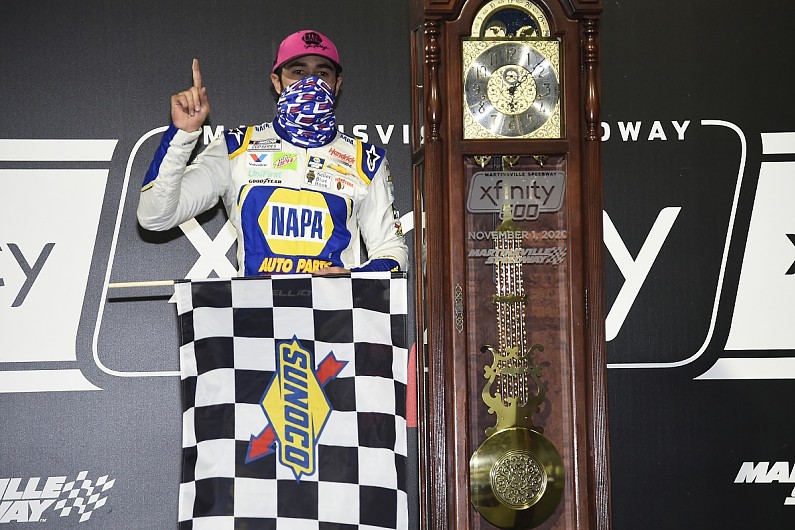 Elliott hails "biggest win ever" to come into title contention

Chase Elliott hailed his dominant victory at Martinsville as the "biggest win ever" for himself and his Hendrick Motorsports outfit, and says he is "proud" to have done it having been "backed into a corner".

Elliott is now the first Chevrolet driver, and the first for Hendrick Motorsports, to reach the final four in at the championship finale since 2016.

"This is the biggest win ever for us. I'm just so proud to be able to be backed into a corner like that and have to win," Elliott said.

"I feel like that's what we've been missing these past four or five years - perform when we don't have a choice.

"I think when you're able to be in a position that we were in, like we were [on Sunday], to have to go perform, go and do that, I think everybody gains a lot of confidence from it.

"We proved to ourselves that we can do it.

"I think we have always believed we can do it. But to go out there and achieve it certainly is something we haven't experienced yet as a group."