Team Penske's Joey Logano became the first NASCAR Cup Series driver to secure a place in the championship-deciding race with victory at Kansas, fending off late pressure from Kevin Harvick.

A caution period for a Tyler Reddick wall-strike on Lap 221 of 267 around the 1.5-mile circuit brought the field to the pits for fresh tyres, with 2018 champion Logano winning the race of pit-road and jumping fellow Ford Mustang exponent Harvick.

When the race restarted, Logano and Harvick quickly broke away from the rest of the pack, the Stewart-Haas driver running within half-a-second of the leader and experimenting with different lines in an attempt to force a mistake.

But Logano held firm through back-marker traffic to seal victory by 0.321s in the first race of the playoffs 'Round of 8' semi-final segment.

Logano's third victory of the campaign was his first since the fourth round of the championship at Phoenix, the venue for the championship race in November, in the final race before the COVID-19-induced two-month hiatus.

Despite failing to find a way past Logano, Harvick is 41 points clear of the cut-off bubble after his taking his third runner-up spot of the season.

Hendrick Motorsports driver Alex Bowman, himself still a Playoff hopeful, finished third having rapidly closed in on the leading duo in the latter stages as they squabbled for the lead.

The top Chevrolet runner got to within a few car lengths of Harvick after a scrappy penultimate lap, only for the 2014 champion to quickly pull away again. 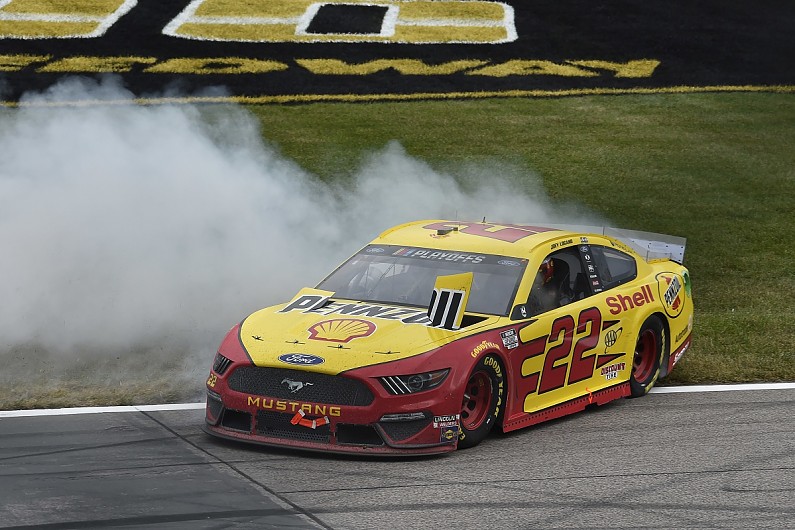 The coldest Cup race since Martinsville in March 2015 produced pack racing more commonly seen at superspeedways such as Daytona or Talladega, as drivers were challenged with the low-power, high downforce aero package.

This was evidenced by Harvick struggling in dirty air early in stage one, before falling away by the segment end as Chase Elliott scooped the win, despite suffering from radio issues which affected him throughout the race.

Denny Hamlin's Joe Gibbs Racing Toyota and Penske's Ryan Blaney duelled for the lead in stage two, with the former maintaining his position through green-flag stops and seeing out a late stage caution for contact between Matt Kenseth and Erik Jones.

Hamlin pipped Harvick in stage three, but his race was undone early in the final stage while battling with team-mate Kyle Busch as he got loose and struck the outside wall, forcing an unscheduled visit to pit-road that left him 15th at the finish.

Brad Keselowski had a strong run to fourth for Penske and strengthened his grip on a spot to advance to the Phoenix finale, with reigning champion Kyle Busch and Elliott rounding out the top six.

Behind Blaney and William Byron (Hendrick), JGR's Martin Truex Jr recovered to ninth after being sent to the rear at the start for failing pre-race tech as Christopher Bell (Leavine Family Racing) completed the top 10.

In his final race at his home circuit, SHR's Clint Bowyer was lapped 26th, while Kurt Busch's hopes of making it to Phoenix took a blow when the engine in his Chip Ganassi Camaro detonated mid-way through the final stage.