Denny Hamlin scored his fourth win of the year in a rain-delayed second NASCAR Cup race of the weekend at Pocono, beating Kevin Harvick by over three seconds.

In a reverse of Saturday's race won by Harvick, the Stewart-Haas Ford driver was chasing after Hamlin's Joe Gibbs Racing Toyota in the closing stages of the 140-lap race, but couldn't close the gap to the Daytona 500 winner and finished 3.068s behind.

The race had started with a range of strategies, with some drivers pitting early while others waiting until after lap 50 before coming onto pit road for the first time. But by the second half of the final stage, the drivers who had come in latest seemed to have the advantage.

Hamlin had narrowly made the top 10 at the end of the second stage, beating Hendrick Motorsports driver Chase Elliot by just 0.002s, and slowly climbed his way up through the order in the final stage.

As others came into the pits for their final stops, Hamlin stayed out and extended his gap over Harvick and the rest of the field.

With 20 laps to go before the chequered flag, Hamlin finally came into the pits, managing to only lose one position in the process.

Martin Truex Jr, who had been pitting late throughout the race, had a 10-second lead when Hamlin returned to the track, but wasn't able to make it to the chequered flag and had to pit just five laps later.

Hamlin was handed a lead he would hold to the end for his sixth career victory at Pocono, with Harvick following him home despite having concerns about vibrations.

Rain early in the race brought a long delay after just a handful of laps. Chip Ganassi Racing's Kurt Busch led early on ahead of Talladega winner Ryan Blaney. 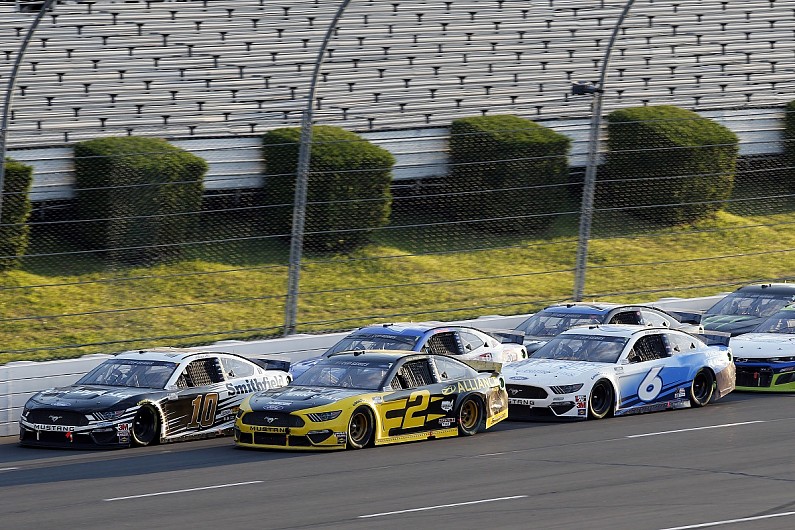 The pair finished the opening stage first and second, before Busch fell backwards in the second stage.

Blaney stayed towards the front of the field but ran into trouble shortly after coming into the pits.

He tried to make a move up the inside of defending Cup champion Kyle Busch, tapping the rear of the Joe Gibbs Racing Toyota as they passed a lapped car. Busch was sent into a spin, hitting the wall and severely damaging the front of his Camry.

Blaney's race was further hindered when Alex Bowman interfered with his pit stop and he fell further back.

Almost as soon as racing resumed the caution was thrown again when Ryan Preece span into the wall, almost collecting Bubba Wallace.

Both drivers were able to continue, with Wallace spending much of the final stage towards the front of the field despite being on an alternate strategy to most around him.

However, he fell backwards in the closing stages of the race and finished 20th.

Matt DiBenedetto spent most of the race running towards the front of the field, taking the chequered flag sixth ahead of William Byron and Clint Bowyer, who were leaning on one another as they crossed the finish line in the battle for seventh.

Bowman and Truex completed the top 10.