Wallace is the only full-time black driver in NASCAR's premier Cup Series and has taken a far more vocal stance in recent weeks on racial injustice and the murder of George Floyd by a Minneapolis police officer who knelt on his neck for nearly 9 minutes while Floyd was handcuffed.

On Sunday, Wallace wore a shirt on pit road that read "Black Lives Matter" and "I can't breathe," referencing Floyd's plea to officers in his final moments.

On Monday night, Wallace appeared on CNN with host Don Lemon and said he believed it was also time NASCAR banned the Confederate flag from being flown at tracks.

Wallace said his Richard Petty Motorsports team did not have sponsorship for the Martinsville race and the "Black Out Tuesday" peaceful protest campaign on 2 June sparked a discussion on running a "blacked out car."

"I'm excited to run a #BlackLivesMatter car for Martinsville, one of our best race tracks and my best race track for sure," Wallace said in a video released by RPM.

"This statement that we have here that we're about to make on live television on Fox will speak volumes to what I stand for but also the initiative that NASCAR and the sport is trying to push.

"They brought that idea to me and I jumped all over it.

"Why not dive in straight to the root and putting Black Lives Matter on the car - one of the most powerful hashtags going around the last couple of months.

"We want to be part of this nation as one, come together as one.

"By running this branding on the car it brings more awareness to it, it lines up with the videos we have put out in NASCAR about listening and learning and educating ourselves." 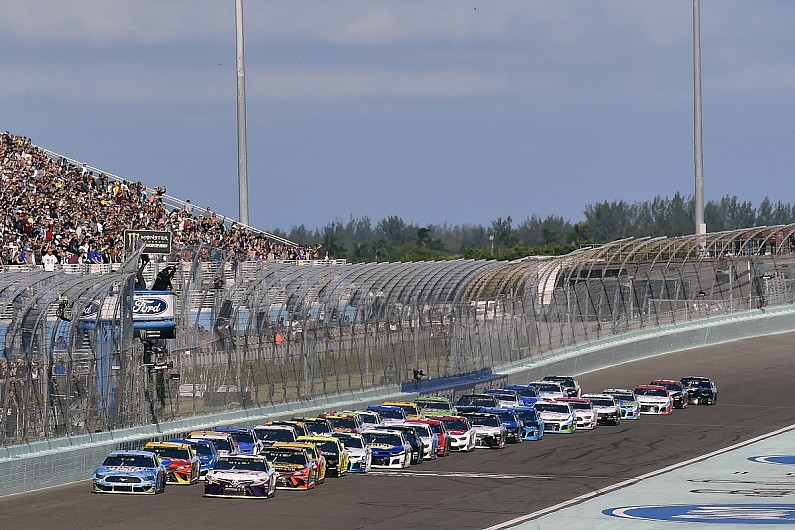 NASCAR has revealed plans to reintroduce a limited number of "guests" at selected Cup events, starting this weekend at Homestead-Miami Speedway, which will be the first time that non-essential personnel will be allowed access to racetracks.

In a statement, NASCAR said: "Modified event procedures, protocols and number of attendees have been finalised with guidance from public health officials, medical experts and local, state and federal officials.

"All guests in attendance will be screened before entering, required to wear face coverings, mandated to social distance at 6 feet, and will not have access to the infield, among other revised operational protocols.

"NASCAR will continue to adapt and improve its procedures to ensure they are effective and can be scaled to support an increased number of fans in the future."

Homestead-Miami Speedway will invite up to 1,000 South Florida service members as honorary guests for this Sunday's Dixie Vodka 400, representing the Homestead Air Reserve Base and U.S. Southern Command in Doral.

Talladega Superspeedway will allow up to 5,000 guests in the front-stretch grandstands/towers for the GEICO 500 race on 21 June.

In addition, there will be limited motorhome/5th-wheel camping spots available outside the track high atop the Alabama Gang Superstretch.