Nick GartonWhat to look out for in the 2021 WRC
San Marino GP Facts, Stats & Memoirs
By Marcel Schot, the Netherlands
Autosport Atlas Writer

Statistically speaking, just how bad is Ferrari's start to the 2005 season? Why does World Champion Michael Schumacher have reasons to be confident ahead of Imola? Marcel Schot brings the answers to these questions, and more anecdotes on the San Marino Grand Prix

For Ferrari, ten points after three races means it's their worst season start since 1996 when they scored the same number of points in the opening three races. The major talking point obviously are the measly two points Michael Schumacher has accumulated so far. It's the worst three race sequence since the German had three consecutive retirements in France, Austria and Germany in the middle of the 2000 season.

The World Champion is poised to reclaim his throne and looking at his history in Imola, he has all the reasons to be confident. Schumacher has won five of the last six San Marino Grands Prix, only beaten by his brother in 2001.

While the giants struggle, Toyota are slowly growing to be the giant they want to be. In the last two races the team outscored the competition through consistency, scoring just as many points in two races as in their two previous seasons combined. After a bad start in Melbourne, the team are now in great shape and on their way to the less consistent Renault team and thus the lead in the Championship.

The driver change at Red Bull Racing means the field will change for the fourth consecutive race. We have to go back a fair bit to see that many driver changes early in the season. In 1994 a similar situation happened when Jean Alesi injured himself in testing after the first race and was replace by Nicola Larini, while Aguri Suzuki replaced the banned Eddie Irvine at Jordan.

The next race Irvine was back, while Jos Verstappen was replaced by JJ Lehto at Benetton. The race after that Andrea de Cesaris replaced Karl Wendlinger at Sauber after the Austrian's crash at Monaco, while Alesi was fit again and took the wheel from Larini. When the season ended, no less than 46 drivers had been part of it, which was reason enough for the FIA to tighten the rules on driver changes.

Twenty years ago Thierry Boutsen achieved a major milestone in his career in the San Marino Grand Prix. The Belgian scored his first podium in Imola and it was quite a surprise. The first two races of the season hadn't gone well for Boutsen. Qualifying on the second half of the grid on both occasions, he managed only eleventh in Brazil, while retiring in Portugal. 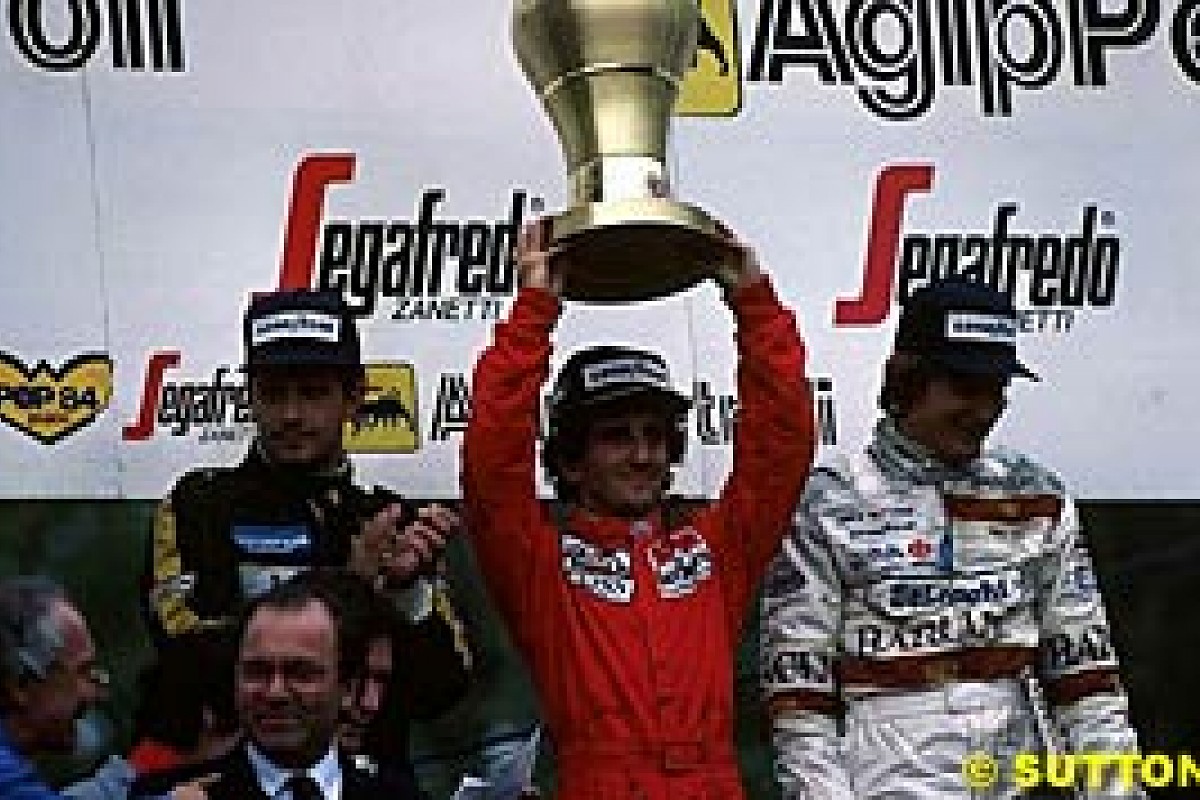 In the first qualifying session the surprise was already there. Behind Ayrton Senna in the Lotus, Ferrari driver Michele Alboreto, Williams' Keke Rosberg and Alain Prost in the McLaren, two Arrows occupied place five and six with Gerhard Berger ahead of Boutsen. On Saturday Boutsen continued in the same vain. The Belgian posted the fourth quickest time, barely six tenths slower than polesitter Senna. While Alboreto had been five hundreds of a second quicker in the Friday session, this meant a fifth starting position for Boutsen, behind Senna, Rosberg, Elio de Angelis in the second Lotus and Alboreto.

On Sunday the rain came down, just like two weeks before in Estoril. For several drivers, among which Boutsen, this was reason to start with some caution. Estoril winner Senna was off the grid quickest, followed by his teammate de Angelis, Alboreto and Alain Prost, who had made a rocket start from sixth. Boutsen dropped to seventh, behind Rosberg and Niki Lauda. Before the first lap was over, Eddie Cheever in the Alfa Romeo and Williams driver Nigel Mansell also made their way past Boutsen and all was pointing to yet another disappointing race for the Arrows driver.

After eleven laps the race reached a low point for Boutsen when after Nelson Piquet and Stefan Johansson passed him, demoting the Belgian to eleventh. A lap later Piquet pitted and Boutsen moved past Cheever again to claim ninth back. This put him third in a group of four drivers who round the circuit within two seconds of each other. Mansell and Johansson were fighting for seventh, while Boutsen and Cheever followed. However, once Johansson made his way past Mansell, the Swede left the group behind him, leaving Boutsen right under Mansell's rear wing. Unfortunately for Boutsen the Briton was able to make his Williams extremely wide, allowing not even the slightest gap.

After 22 laps Boutsen temporarily dropped one place as Piquet blasted by on his way back up after his pitstop. A lap later Boutsen was back in ninth when Keke Rosberg retired with a brake problem. The next victim was Michele Alboreto, who headed into the pits for a lengthy pitstop. One thing remained the same for Boutsen and that is the Williams right ahead of him. Only after 37 laps the Arrows finds a way past the Williams. The next car to arrive in Boutsen's vision is that of Piquet. The Brazilian, forced to take it easy with his fuel load, saw a 15-second gap disappear. However, with Boutsen past and into sixth, Piquet held on in hope of clinching the final point in the end.

A few laps later the great fuel preservation really started. Boutsen let Piquet go ahead again, but regains sixth with Lauda slows down. With three laps to go the fuel tanks get empty for leader Ayrton Senna, allowing Ferrari driver Stefan Johansson into the lead, much to the pleasure of the tifosi. Unfortunately for them, the joy didn't last long as Johansson also grinds to a halt. The third victim was Piquet, which in one lap rockets Boutsen from sixth to third. Far ahead Alain Prost takes the chequered flag first with Elio de Angelis a distant second.

For Boutsen things end on a real scare. In the final lap his engine cut out, but thanks to a downhill section the Arrows got going again only to stop without fuel on the start-finish straight. The car kept rolling slower and slower and finally stopped, just over the line. The third place meant Boutsen's first podium, which after the race even turned into a second place when Alain Prost's car was found to be two kilos under the weight limit.

Nineteen years ago the San Marino Grand Prix was the basis of Alain Prost's second World Championship, while it was also the first time Gerhard Berger scored a podium finish. 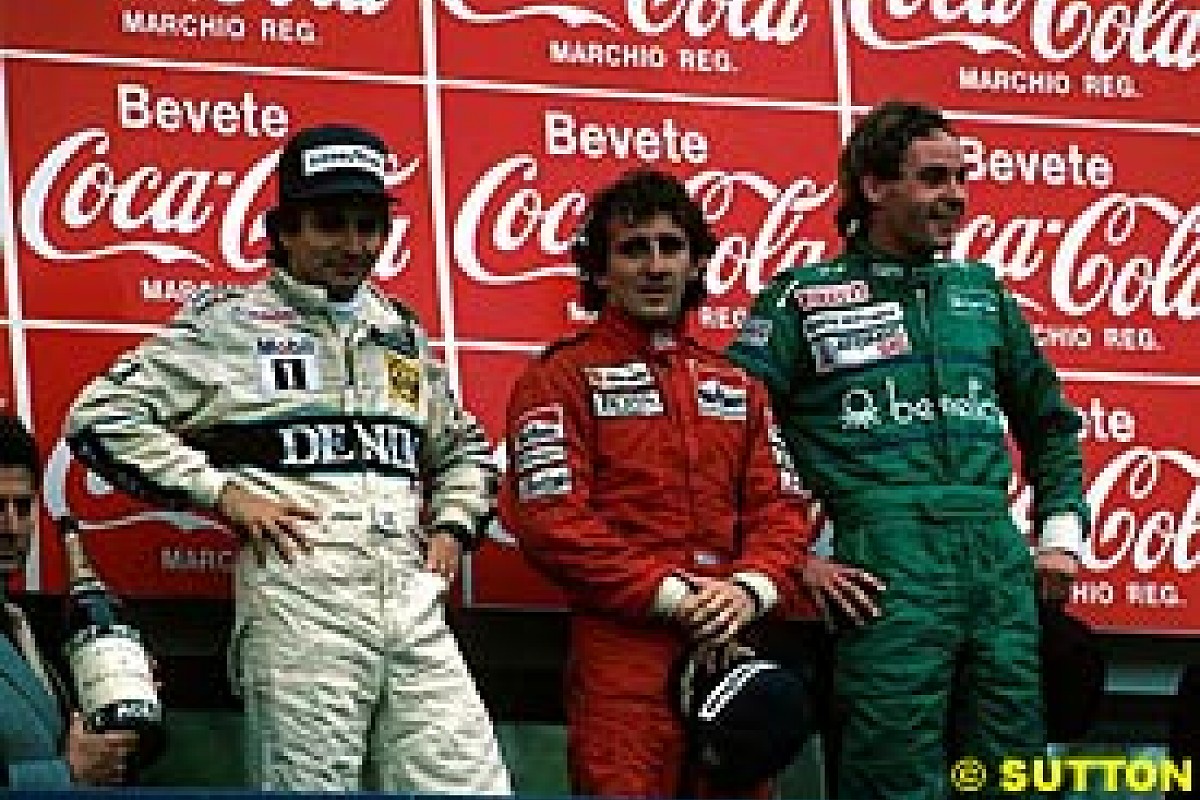 In Friday qualifying it was just like in had been in the first two races of the season: Ayrton Senna in the Lotus, a big gap and then the rest. Nelson Piquet managed a second time in his Williams, eight tenths behind his countryman. McLaren driver Alain Prost follows the two Brazilians 1.2 seconds behind the provisional pole time, followed by Michele Alboreto in the Ferrari. Further behind there's a bit of embarrassment for the people of Ford. Alan Jones in the Lola, powered by the much anticipated Ford turbo engine, is almost half a second slower than his teammate Patrick Tambay, who was using the old Hart engine.

On Saturday nothing much changed. Even though his rivals made up some ground, Senna still grabbed the pole, his third in three races that year. Piquet held on to second, while his teammate Nigel Mansell moved up into third, leaving Prost in fourth and Alboreto in fifth. At Lola the Ford disaster growed. While Tambay improved to 1:27.8 to claim eleventh on the grid, Jones' Ford powered car is one of the few who's slower on Saturday than on Friday and had to settle for 21st.

At the start the faith of both the Williams drivers was very different. While Piquet powers past Senna into the lead, Mansell immediately saw the McLarens of Prost and Keke Rosberg sail past him. A lap later the Briton headed for the pits and not much later ended his race. For Senna the race didn't last long either as the Brazilian was forced to exit with a broken wheel bearing after only eleven laps. The disappearance of two of the faster drivers left Piquet with the two fighting McLarens behind him. A long way behind them Michele Alboreto was a lonely fourth with Rene Arnoux in the Ligier and both Benetton drivers Teo Fabi and Gerhard Berger battling for fifth place.

In the second half of the race things changed around quite a bit. Piquet dropped behind the McLarens after a troubled pitstop and Prost grabbed the lead as his pitstop was significantly quicker than that of his teammate. Far behind them, Berger dropped back further and further with a broken clutch, while Brabham driver Riccardo Patrese drove like a devil and gained one place after another. Of the drivers fighting for places four to six, Fabi was the first one to retire when he blowed his engine after 39 laps.

Next up was Rene Arnoux, who ended his race on three wheels seven laps later. In the final laps the tension was mounting as Imola was notorious for its fuel consumption. This time around Rosberg and Patrese fell victim to miscalculations. Both cars came to a stop two laps from the end in respectively second and fourth place. Just before that, Alboreto also had to park his car with a broken turbo. The result of the late retirements was that all of a sudden Gerhard Berger found himself on the final podium spot.

The final lap proved a true thriller. Even though Prost's margin on Piquet was some twenty seconds, the Frenchman didn't drop his pace enough and ran out of fuel in the last sector. The McLaren rolled and rolled and just makes it across the finish line. A rare mistake by the professor, but one without repercussions. Behind him Berger played it very smart. The Austrian, 15 seconds ahead of Stefan Johansson in the Ferrari, hit the brakes when he reached Prost and crosses the line just behind the winner, keeping himself lapped to avoid having to drive the extra lap.