The season is underway, and for the first time since Italy 2003 Ferrari isn't leading the Constructors' Championship. Renault is leading the dance after the first race, something they haven't done since Austria 1983.

One of the most remarkable performances in the Australian Grand Prix was David Coulthard's fourth place in the Red Bull-Cosworth. Or was it just down to the qualifying position? The Scot had Williams driver Mark Webber on his tail for most of the race, who was unable to make a move despite being within a second for the majority of the race. This would indicate that the Red Bull basically has the speed to not be clearly outclassed by the Williams.

In front of Coulthard there was initially Jarno Trulli, who gradually moved away from the Red Bull driver before the first pitstop. Between pitstops Coulthard was second behind Giancarlo Fisichella, keeping the gap stable except for lap 39 in which the Scot lost 3.5 seconds. The second round of pitstops dropped Coulthard back to fourth, as his stop was slower than those of Barrichello and Alonso. Overall the impression is that the Red Bull has the speed to keep up, but we'll have to see its real potential when it starts a bit further down the grid.

For Sepang the focus is on Michelin. The French tyre manufacturer has occupied two of the three podium positions in all of the last three races at the track, winning easily in 2002 and 2003 while only narrowly beaten by Ferrari and Michael Schumacher last season. It will be interesting to see how the new qualifying system will work out, and whether it will get its first fully dry display this weekend.

As far as qualifying in Sepang goes, Schumacher is clearly the man to beat. Of the six races run in Malaysia, the German has taken pole on five occasions. Only in 2003 did Fernando Alonso steal pole, heading what was a then shocking all-Renault front row.

Whether Giancarlo Fisichella can repeat his Melbourne victory remains to be seen - the Italian always seems to have a hard time in Malaysia. Last year he qualified twelfth, only to drop to 19th in the opening laps and struggle all race, never even reaching the top ten. In 2003 he didn't even start, as a broken clutch left him stranded on the grid. The year before he qualified a decent ninth, only to be hit by teammate Takuma Sato and having to drive a hopeless race way behind the pack. So far Fisichella hasn't driven a single lap in the points at Sepang, something he no doubt plans to change this weekend. 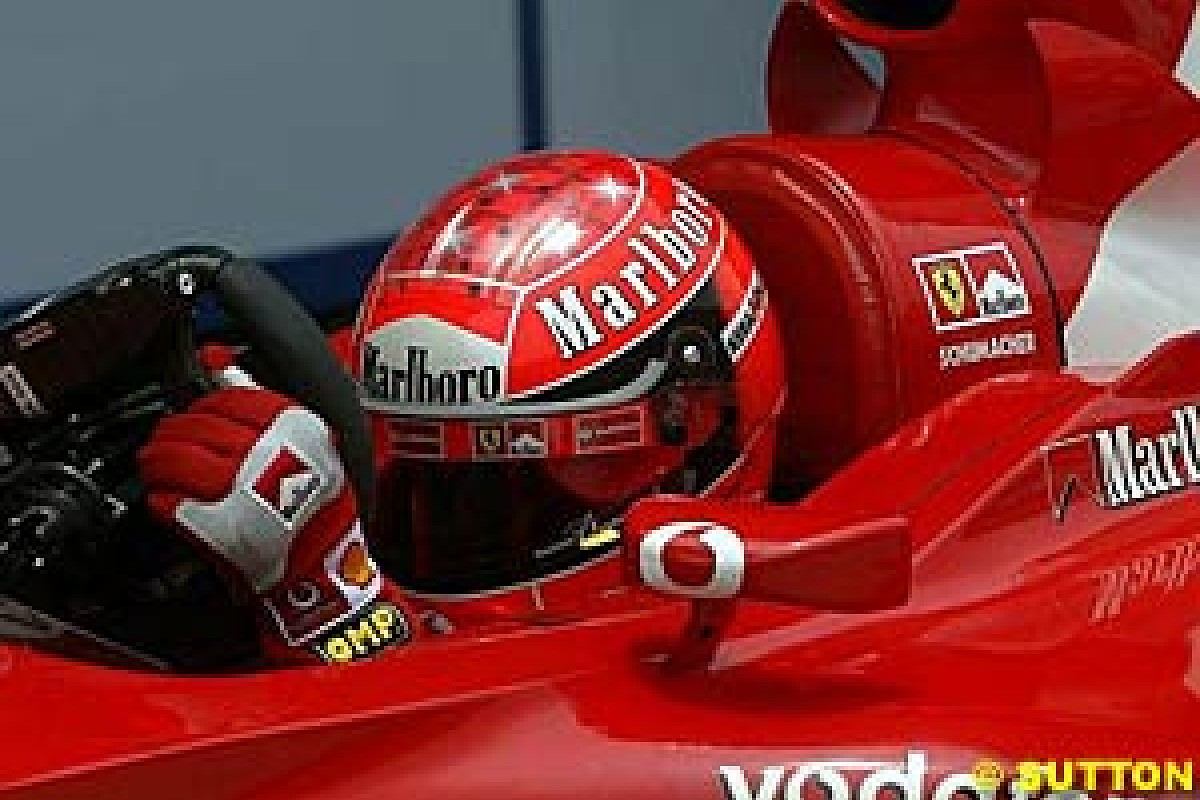 Since then the Scuderia has been through many highs and lows. Sometimes these were close in terms of pole positions - the team achieved none in 1973, and no less than ten the year after. The worst period started after the 1990 Portuguese Grand Prix: Nigel Mansell's pole there was the last until Gerhard Berger qualified in front at the 1994 German Grand Prix, a 59 race drought.

The arrival of Michael Schumacher in 1996 initially showed moderate success in qualifying. It wasn't until 2000 that things really got rolling again. With ten poles that year and eleven in the next, Ferrari arrived at 148. Rubens Barrichello set number 149 in the opening round of 2002 in Melbourne and thus the team arrived in Sepang aiming for 150.

In free practice things didn't go all that well for the Ferrari drivers: on Friday Schumacher was third, a second behind both McLarens, and Rubens Barrichello was further down in seventh place. On Saturday morning the Brazilian made a good step forward and ended up fourth, but for Schumacher 1.4 seconds faster than his Friday time meant only sixth place.

However, in qualifying the German seemed to have his act together very well. His first lap of 1:36.1 was good enough for pole until Montoya came out and shaved three tenths off. In his second attempt Schumacher set things straight with a 1:35.2, which was good enough for pole. Montoya came to within two tenths of a second, but despite setting the fastest time in both the second and third sectors, he couldn't compile a perfect lap to beat Schumacher.

This week in history

This week it's 13 years since Michael Schumacher scored his first podium finish. After having started in fourth position at the opening round of the 1992 season in South Africa, Schumacher and Benetton went to Mexico with high hopes. Williams and McLaren were strong, but the German had shown in Kyalami that he was able to put up a fight with at least the McLarens.

In first practice Schumacher indeed managed to be up there, setting the third fastest time. 1.3 seconds behind Nigel Mansell in the Williams was not much of a concern as the Williams was clearly in a league of its own, but just two tenths behind the second Williams of Riccardo Patrese and four tenths clear of Gerhard Berger in the McLaren was a very good start indeed to the weekend. In first qualifying Schumacher added to the feeling of confidence by setting the second fastest time. 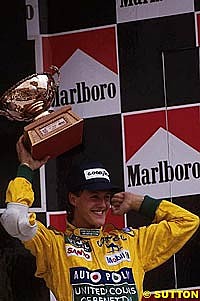 Unfortunately the Saturday qualifying session dropped him to third, as Riccardo Patrese nearly matched Mansell's Friday time. The final grid showed three classes: Williams claiming the front row, Schumacher a second behind them in third, and the rest of the field 1.3 seconds behind the German. What was very helpful for Benetton was that the rest of the field was led by their second driver Martin Brundle. On the third row were the two McLarens, followed by JJ Lehto in the Dallara, Mauricio Gugelmin in the Jordan and then Pierluigi Martin in the second Dallara, with Jean Alesi in the Ferrari rounding out the top ten.

At the start of the race positions one and two were quickly decided, as Mansell and Patrese left the rest of the field to battle for third. At the start it was Ayrton Senna who got away quickest, followed by Brundle and then Schumacher. In the second lap Schumacher moved past his teammate, now going after Senna in the McLaren. The Brazilian's McLaren wasn't at all well, but Schumacher wasn't able to move into third position until Senna retired with a transmission failure after eleven laps. By now the gap to Patrese had gone up to six seconds.

While the Williams pair exchanging fastest race laps unchallenged, Schumacher's third place was frantically protected by his teammate. In a Titanic battle the Briton fended off attack after attack from Gerhard Berger. Here too it required a breaking down car to change the positions, but it took Berger much longer than Schumacher to move up a position: it wasn't until lap 41 that Brundle had to give way to the Austrian with a terminally ill engine.

From then on Berger did everything he could to get closer to Schumacher, but the 11 second gap proved too big. While the McLaren driver set the fastest lap in the race, Schumacher responded to keep the gap big enough, bringing the car home in third for his first podium.