GP RacingThe reluctant Lotus ace who was dropped for Clark
A1 GP: the Verdict is In
By Tim Redmayne, England
Autosport-Atlas International News Editor

The new A1 Grand Prix series made a much-talked about debut at Brands Hatch last weekend. There were a lot of positive signs and a few negative, too, but the new championship took off in promising fashion. Tim Redmayne analyses the rights and wrongs from the first A1 GP event

Some loved it and some laughed at it. But there was no denying that A1 Grand Prix arrived with a bang last weekend at Brands Hatch.

More than 46,000 people braved close to two-hour traffic jams to get their first glimpse of the World Cup of Motorsport, one of the most hyped opening events of a Championship in history.

Despite fears that series founder Sheik Maktoum was out of his mind, the race would be carnage or might not even start at all, the critics were silenced with the first two instalments of this global one-make series.

With so much coming together for the first time, understandably things were not quite as perfect as Maktoum's vision. But there was an awful lot about A1 GP that indicates that it could be here for a while.

The field. The grid had a full compliment of nations. Yes, there was some last minute deals done to ensure 25 nationalities made the Brands Hatch grid but watching the field go through Paddock Hill Bend was a spectacle.

The Lola-built, Zytek-engined 550bhp cars looked and sounded good too. Many still need sponsors on board to make A1 GP look like a kosher motor racing series, but a few were displaying some names by the end of the weekend. Some of the colour schemes were too similar -Austria and Indonesia, for example - but there were some stunners like Brazil and Holland.

Car safety. When the Lebanese car of Khalil Beschir was pitched into a series of barrel rolls at Paddock, many held their breath. However, he walked away safely waving at the crowd, providing a headline grabbing image for the Monday papers. The car will still need a lot of work, but the safety cell was intact and the roll hoop was undamaged. The resultant television coverage, particularly the camera pointing at his head provided superb, if comical, footage.

A large partisan crowd. There was a genuine buzz surrounding Brands Hatch on Sunday, and already fans were buying into Sheik Maktoum's vision. On Saturday morning a group of Dutch fans arrived early and unfurled a 10m by 6m Dutch flag for the weekend alongside the pits straight. In addition to the multiple Great Britain shirts, there were fans in Pakistan shirts, fans carrying Malaysian flags and many of the other nationalities of the grid had some fan representation. Everyone in the crowd had become instant fans of someone.

The feature race. Superb. It provided action in the pits, dramatic crashes and an inspired overtaking move from Nelson Piquet Jr. It was every bit as entertaining as we had been promised.

The television coverage of qualifying. This was a disaster. With a revolutionary new format being tried, it was crucial that the viewer understood what was going on with on-screen graphics and incisive commentary. Sadly there was neither, because the timing computer crashed. 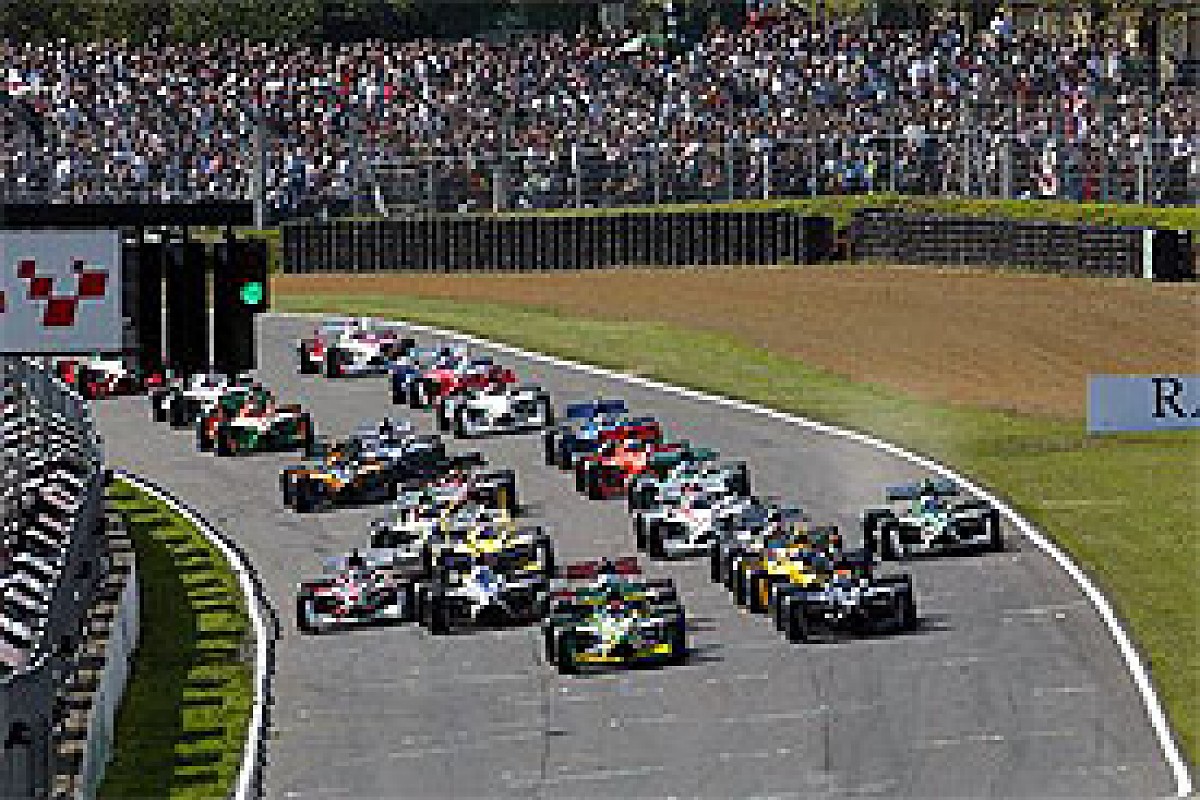 There were no splits or finish line timings to get excited about when the cars were on the hot laps. There was no instant display of a cars' position that put them on the grid.

Organisers say that the problems will be fixed for the second race at the EuroSpeedway, so the jury should stay out on the actual format until then.

The sprint race. Pure boredom. After the first lap, the top 15 didn't change their order for the rest of the race. With teams only gaining one point for every position made up in the top ten, and the grid for the feature race being determined on the race's finishing order, many drivers were just happy to keep their cars in one piece for the next race and not fight to get up the field.

Reliability. While not suffering the teething troubles of GP2, the reliability of the cars was not as bullet-proof as during the official test sessions. Batteries in particular were a concern, ending the races of Alexandre Premat's French car and Robbie Kerr's Great British entry. The retirement for Kerr was all the more painful because the team had specifically changed it overnight fearing that it could prove a problem.

Pitstops. With a cramped pit area rules were introduced that meant mechanics had to wait until their car came to a halt before rushing out of their garage to start work. What was the problem was that some teams had problems with sticking wheels, which affected Pakistan, Germany and Brazil.

There were other mistakes made too, including China dropping the car before the wheels had been changed and Japan's Ryo Fukuda and Mexico's Salvador Duran both stalling.

That said, the pitstops did their job in shaking up the order and added race tension. If it hadn't have been for Brazil's slow stop, Piquet would have never had the opportunity to pass Will Power, which capped a terrific race.

There were 12 red flags and two safety car periods during the weekend. Driving standards were varied across the field, and it was to be expected there would be some incidents as drivers got to grips with both the cars and the tricky Brands Hatch Grand Prix circuit. 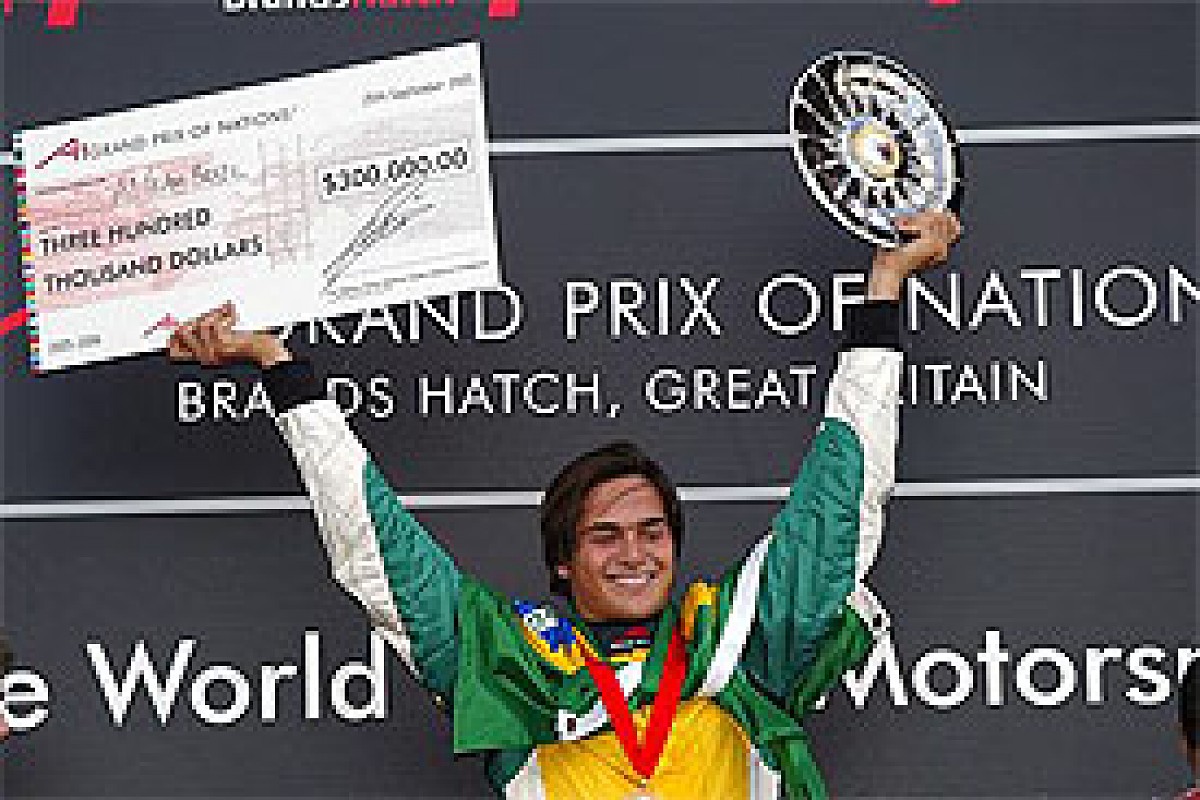 The problem was worst in Friday afternoon's wet session, when five red flags meant only 42 of the scheduled 60 minutes could be run. Cynics would argue that the series was protecting its cars, with the teams not getting their second units until the third round at Estoril. But if that was the case, it wasn't a bad decision - it provided us with a good race.

None of these problems are in the scheme of things minor - none of them stopped the show going ahead and the product aired worldwide.

Brands Hatch bodes well for the rest of the season. The event has been heavily promoted for six months and the acid test will be how many fans come through the gases at coming event at the more recently announced events at Lausitz, Estoril and Eastern Creek.

There were minor teething problems with the show but the raw product was there and no spectator will have noticed. These have the potential to be fixed and the series could happily sit alongside IRL and Champ Car as another non-F1 single-seater series.

The points system and lack of qualifying for the feature race both will contribute to an uninspiring sprint race, but if the feature race continues to be as good no-one will be too concerned.

No one should have any illusion this is about to overtake F1 in popularity stakes, but it will something extra to watch on TV to watch through the winter months.