What needs to happen for Fernando Alonso to lose his grip on the Championship? What happened 21 years ago this week? And who celebrated his final victory eight years ago at the German Grand Prix? Marcel Schot brings the answers and more anecdotes on the twelfth round of 2005

With 18 points, Fernando Alonso has come out of the France-Britain double header the clear winner and Championship favourite. With 77 points, and a 26 point lead over rival Kimi Raikkonen, the Spaniard's odds to win the title are very good indeed. Just eight races remain in the season, and simply beating Alonso each time will not be enough for Raikkonen. Eight victories will put the Finn on 131 points, whereas eight second places will give Alonso 141.

We have reached the phase in the Championship where the competition needs Alonso to fail in order to make any chance for the other drivers whatsoever. The only driver to ever overcome a deficit of more than 26 points to win the Championship was James Hunt in 1976, and that took a near fatal accident of the man leading him, Niki Lauda.

Meanwhile, the giants of what is now almost a past era, Ferrari, appear to be clawing up a little bit. Obviously helped by their United States Grand Prix one-two without competition, Schumacher and Barrichello are now third and fourth in the Championship, with the reigning champ having scored points in the last six races. It may look a bit less dramatic than 1980, but to the tifosi it must simply be the most painful season of all time.

Teams rarely go from dominators to non-contenders and, especially after the longest period of domination in Formula One history, this blow is a hard one. However, from a statistical point of view, no negative records look set to be broken. The team has won, is third in the Championship, and from that perspective nothing disastrous has happened. This of course shows how relative statistics are.

In 1997 the German Grand Prix saw Gerhard Berger win his tenth and final victory. After three year periods at Ferrari, McLaren and once again Ferrari, the Austrian had returned to the team that had given him his first win back in 1986; Benetton. The first half of 1997 hadn't been easy for Berger. His teammate Jean Alesi had been faster most of the time and, to make matters worse, Berger then was sidelined with a bad sinus infection for three races, in which his replacement Alexander Wurz performed strongly. However, in Germany Berger was back in the Benetton to show he wasn't written off yet.

While free practice saw Berger back in his usual midfield position, things were different in qualifying. The Austrian dominated the timesheets right away, and only Jordan driver Giancarlo Fisichella could really come close. However, the Italian was stranded two hundredths of a second behind the Benetton, giving Berger the twelfth pole position of his career. This boded well for the race as, unlike other drivers, Berger had a history of converting poles to good results. In the previous eleven occasions, the Austrian won four times and finished another two on the podium.

On race day things kept working out in Berger's favour. The Benetton driver made a clean start to grab the lead ahead of Fisichella and Ferrari driver Michael Schumacher, who got the better of Mika Hakkinen in the McLaren. With Schumacher tucked in behind Fisichella, Berger started moving away fast. At a steady pace of six tenths per second, the Benetton driver increased the gap to twelve seconds by the time of his first pitstop in lap 17.

With Fisichella now the leader, and on a one stop strategy, Berger knew the time had come to push and so he did. He had come back fourth in the track, behind Fisichella, Schumacher and Hakkinen, with the Finn right in front of him. A lap later Berger was back in third, chasing Schumacher ten seconds ahead of him. As Schumacher went into the pits after 22 laps, Berger found himself in second place, eight seconds behind Fisichella and closing in at half a second per lap.

When Fisichella pitted three laps later, the lead was Berger's once again, with the Jordan driver 16 seconds behind in second, ahead of Berger's teammate Jean Alesi. These were the laps where Berger pushed a little more in the knowledge that the margin was small for his second pitstop. After 28 laps Berger's lead had grown to 19 seconds, but it all seemed in vain when the Benetton driver lost precious seconds as Stewart pilot Jan Magnussen's engine blew up right in front of the race leader. Berger had to slow down severely to avoid the Dane in a cloud of smoke, losing over two seconds on the lap.

Over the next five laps he pushed for all he was worth, but with a heavy heart he noticed the gap was under still twenty seconds. The pitstop was fast but not fast enough, and Berger saw Fisichella ahead of him when he left the pitlane. Whether it was the pressure of Berger behind, the nervousness of actually leading the race or simply a mistake, only Fisichella knew, but on the very first lap after Berger's pitstop the Italian went wide and allowed the Austrian back into the lead.

Without too much trouble, Berger then consolidated his lead and, unlike the previous year, the car didn't let him down in the final stages. The Austrian scored his tenth victory, which was also his, and Benetton's, final victory.

This week in history

Twenty one years ago it was a season of McLaren dominance. By the end of July Formula One returned to Europe after three races in North America, with McLaren driver Alain Prost comfortably leading the Championship, 9.5 points ahead of Lotus' Elio de Angelis. The Italian was closely followed by Prost's teammate Niki Lauda, Ferrari veteran Rene Arnoux and Williams driver Keke Rosberg. On 22 July it was time for the British Grand Prix at Brands Hatch. 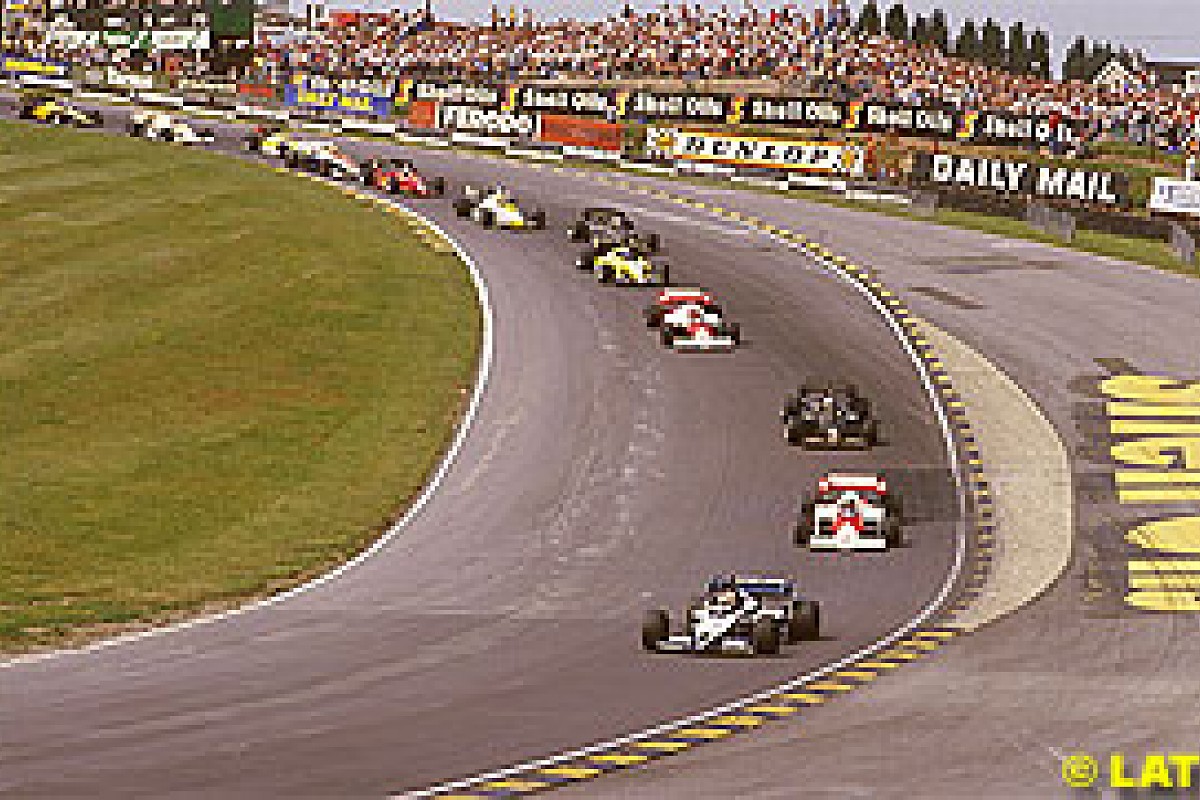 In the days leading up to the race, FISA boss Jean-Marie Balestre refused entry to Tyrrell, with the team disqualified from the season due to the use of illegal ballast in their cars. However, FOCA boss Bernie Ecclestone made sure Tyrrell could race, avoiding legal action.

With practice barely underway, a bigger drama took place. Toleman driver Johnny Cecotto lost control of his car and crashed hard. The Venezuelan was transported to hospital to have his damaged leg operated on, an injury which eventually meant the end of his Formula One career.

The first qualifying sessions it was a one-two for McLaren; Alain Prost grabbed provisional pole with teammate Lauda a tenth of a second behind him. Only two cars were able to stay within reach: Elio de Angelis was two tenths behind Prost, while Cecotto's teammate Ayrton Senna was nearly four tenths off pole.

Saturday brought a big surprise, when Nelson Piquet jumped to pole position in the older Brabham, driving nearly four seconds faster than he did the previous day. The order between Prost, Lauda and de Angelis remained unchanged, but a less than stellar session for Senna meant Rosberg and Renault driver Derek Warwick moved ahead of the young Brazilian on the grid.

The start of the race was a chaotic affair. Far behind the leaders, Eddie Cheever spun in the Alfa, taking out RAM driver Alliot, Tyrrell's Stefan Johansson and Osella's Jo Gartner in the process. Less than fifteen minutes later, the second RAM, driven by Jonathan Palmer, made a fiery crash in the corner before start finish. The race was red flagged immediately, with Piquet the leader, followed by Prost and Lauda.

At the restart Prost immediately grabbed the lead and slowly but surely started to drive away from Piquet and Lauda. 27 laps after the restart a seemingly easy win for Prost ended in pain as the Frenchman was forced out of the race with a broken gearbox. At the same time, Lauda moved ahead of Piquet on the track, keeping the lead with McLaren. With pressure from behind, Lauda drove faster and faster in his attempts to fend off Piquet, and with only 15 laps to go the Austrian was able to strike a gap as turbo problems started to manifest themselves for Piquet.

With the pressure now gone, the experience Lauda nursed the car home, a long way ahead of Warwick and Senna, who scored his second podium finish after he had narrowly lost in Monaco. Lauda's win brought him to within 2.5 points of his teammate and strengthened his team's lead in the Constructor's Championship to a commanding 33 points.