How does Fernando Alonso's record this year compare to the past? What happened in the British Grand Prix of 1982, and what happened 26 years ago this week? Marcel Schot brings the answers and more anecdotes on the tenth round of the season

Just when Fernando Alonso seemed on the verge of collapsing, the Spaniard returned to form - after two non-results, he scored his fifth win of the season. When we look back at 2005, nobody will see the two non-results - what they will see is five wins in the first ten races. The last driver not called Michael Schumacher to win five races in a full season was Mika Hakkinen back in 1999.

If we look at number of laps led so far, it's a more balanced fight between Alonso and Kimi Raikkonen. With 239 for the Renault driver and 224 for his rival, there are just 15 laps between the two.

While Ferrari are having a difficult season, reliability isn't the main thing that's different from last year. The Italian team have once again put in the most race kilometers; with 5346 they are slightly ahead of Toyota and Jordan. Of course the missing of the United States Grand Prix by the Michelin teams played a key part in this, and in the list of kilometers per race we only find the Scuderia in fourth place behind Toyota, McLaren and Sauber.

It's clear that Toyota, Jordan and McLaren really worked on the thing that mattered last season, while BAR on the other hand are really taking a fall.

In 1982 the British Grand Prix was the second race of the season for Patrick Tambay. Ferrari had hired the Frenchman as a replacement for the deceased Gilles Villeneuve. Two weeks prior to the British Grand Prix, Tambay had made his debut with the team in Zandvoort, qualifying sixth and finishing eight in the almost sacred number 27 car.

At Brands Hatch qualifying proved to be a lot more difficult than at Zandvoort. In both sessions the Frenchman clocked the eleventh fastest time but, with different drivers ahead of him, he ends up thirteenth on the grid. However, the worrying thing is the distance behind his teammate Didier Pironi - the 1.7 seconds of the first session got down to 1.1 seconds in the second one and 1.4 seconds overall. Tambay was only a short distance behind Championship leader John Watson, though. Nearly two seconds ahead, Keke Rosberg took his first pole position.

In the race Tambay began his march up the field before the start - as Keke Rosberg's engine stalled on the grid, the Finnish Williams driver saw his pole position go up in smoke without even moving. Number two on the grid, Brabham driver Riccardo Patrese, also helplessly stood on the grid as his car's gearbox failed to cooperate. The end result was a crash which eliminated not only Patrese, but also Rene Arnoux in the Renault and Toleman driver Teo Fabi, who were unable to avoid him.

Tambay steered clear of the mayhem and also made his way past John Watson in the McLaren; despite this both the Toleman driver Derek Warwick and Alfa's Bruno Giacomelli leapfrogged him, holding him back in eleventh place.

In the fifth lap Tambay gained another two spots as he passed Giacomelli while Tyrrell driver Michele Alboreto pitted. With Rosberg chasing Tambay, Nelson Piquet retired from the lead after only ten laps - the Williams driver was by far faster and soon overtook the Ferrari driver. However, only a few laps later the Finn was back behind Tambay after a pitstop for a rear wing and fresh tyres.

Now Tambay was in his rhythm and managed to find a way past Renault driver Alain Prost. Shortly after having done so, he showed that the yellow car had been holding him back all the time. Tambay soon went half a second per lap faster than he had while behind Prost, now tucked him behind Andrea de Cesaris in the Alfa. Meanwhile Williams driver Derek Daly made his necessary pitstop, promoting Tambay to sixth place.

After 41 laps Tambay was presented with fifth position when Derek Warwick's drive train broke. Until that point, the Briton had been sensationally second behind the unleashed Niki Lauda. Five laps later Tambay finally found a way past the stubbornly fighting de Cesaris and into fourth place. More so than after passing Prost, it immediately was obvious exactly how much the Alfa driver had been in the way of the Ferrari - the lap after having passed de Cesaris, Tambay's time was a full second faster! However, the driver on the final podium position was Elio de Angelis in the Lotus, who was a massive 18 seconds ahead.

This seemed too large a gap until the Italian suddenly slowed down with ten laps to go. What happened was that the Lotus was about to run out of fuel. De Angelis almost made it, but in the final lap Tambay managed to overtake the unfortunate driver to claim his first podium finish.

While winner Lauda and Ferrari drivers Pironi and Tambay celebrated their podium finishes, de Angelis managed to narrowly finish ahead of the charging Daly and Prost in what must have been one of the closest finishes for fourth place in Formula One history: the three were covered by a mere four tenths of a second.

26 years ago, the British Grand Prix marked round nine of the Championship. Going to Silverstone the Championship saw the Ferrari pair of Jody Scheckter and Gilles Villeneuve one and two, with Ligier drivers Jacques Laffite and Patrick Depailler behind them. However, for Depailler the season was already over after the Frenchman had injured himself severely in a hang gliding accident. 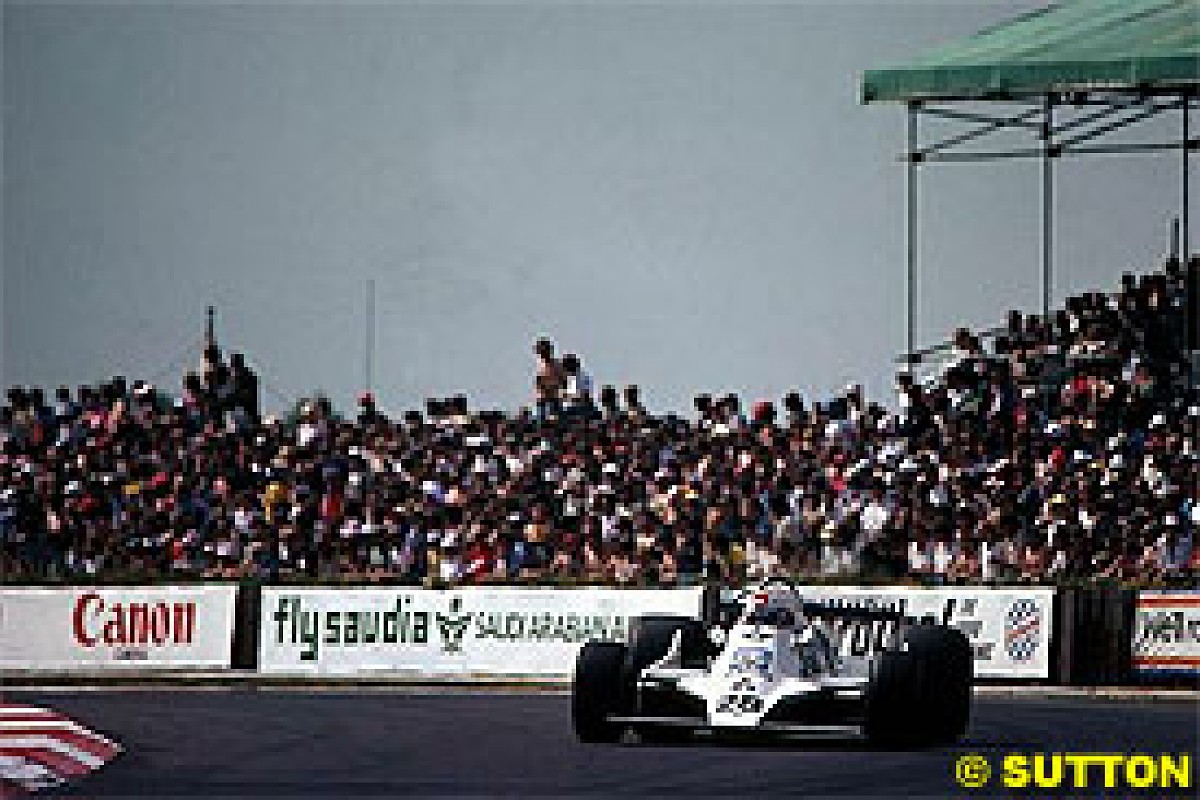 In the constructors' Championship it was a clear lead to Ferrari, followed by Ligier and Lotus. Tyrrell was in fourth, but were 43 points behind the Scuderia and twenty behind Lotus and very much out of the picture. Williams followed them with 14 points, while Renault had scored all of their 13 points in the previous round in France.

In first qualifying Alan Jones in the Williams annihilated the opposition. After initially battling it out with Jean Pierre Jabouille in the Renault and Brabham driver Nelson Piquet, the Australian smashed the lap record to bits towards the end of the session, going 1.4 seconds quicker than any other driver on the track. Behind him were the Renaults of Jabouille and Rene Arnoux, who in turn were followed by the two Brabhams of Piquet and Niki Lauda. For Ferrari the session was hopeless - with a lack of grip everywhere, Villeneuve ended up tenth and Scheckter twelfth, with Ligier's Laffite between them.

In final qualifying Jones again was quickest, but unable to beat his Friday time. The rest of the field did make up ground, but only Jabouille and Piquet got within a second of the Williams driver. Behind the two of them it was the second Williams of Clay Regazzoni in fourth place.

On Sunday Jones continued his display of power. The Australian took the lead from the start and rapidly disappeared into the distance. The first of the followers to disappear from the track was Nelson Piquet, who spun off in the second lap. A lap later Mario Andretti in the Lotus retired with a broken wheel bearing. This all worked well for the Ferrari drivers, who, despite their handling problems, moved up to fifth and seventh with a struggling Niki Lauda between them.

After 16 laps, with having Lauda retired due to brake problems, Jabouille became the next victim amongst the frontrunners. The Frenchman decided he had the wrong tyres, pitted for new ones, only to drive away too early and rip his front wing off with an air valve. A lap later he pitted again for a new front, but his engine had already been damaged, retiring the Renault driver shortly after his second stop.

This gave Williams positions one and two, followed by Arnoux, Scheckter, Villeneuve and Laffite. At the front, Jones was hardly aware of what happened behind him; the Williams driver was racing around over twenty seconds ahead of the field.

Unfortunately there was one thing Jones was aware of after 38 laps, and that was the fact that his car smoked. Diagnosis was a leaking water pump, and the result was retirement from what seemed to be a certain victory. Regazzoni was immediately ordered to nurse the car home. The Ferraris meanwhile were fighting a lost battle as worn tyres decreased their performance. Laffite had climbed to third, behind Arnoux and ahead of Scheckter and Villeneuve.

Three laps later it was over for Laffite with a malfunctioning engine. The later stages of the race were on the one side a display of Williams power, with Regazzoni doing what Jones did before and demolishing the field, and on the other side a display of Ferrari misery. While Scheckter struggled on with badly worn tyres, losing places to Jarier and McLaren driver John Watson in the final laps, Villeneuve stopped for fresh rubber only to encounter a fuel problem with a few laps to go.

In the end Regazzoni finished 24 seconds clear of Arnoux, scored Williams' first victory. Tyrrell's Jean Pierre Jarier finished third, with Watson and Scheckter closely behind each other in fourth and fifth. The final point went to veteran Ligier driver Jackie Ickx, thanks to McLaren's Patrick Tambay running out of fuel in the final lap.