How bad is Michael Schumacher's negative streak so far? What team changed the most number of engines so far this year? Which milestones were set in Monte Carlo 17 years ago, and what happened 25 years ago this week? Marcel Schot brings the answers and more anecdotes on the sixth round of the season

Five races into 2005 and Ferrari's misery continues. While the F2005 appears to have potential in the hands of Michael Schumacher, it refuses to come to fruitation. The World Champion is now win-less for seven races, something which hasn't happened since the seven races from Australia 1995 until Monaco 1996. Back then it was the rain in Spain that brought Schumacher back onto the top spot of the rostrum. This year Schumacher seeks to end his dramatic start of the season in Monaco, where he hasn't won since 2001.

For Jarno Trulli things look very different. The Italian returns to the track where he scored his first win last year as a surprising number two in the Championship.

With five races done, it's time to look at the effect of the engine rules. While Minardi seem to change their engines after just about each qualifying session, the Anglo-Italian team don't actually use more engines than most rivals. BAR are the ones really throwing the money around with most engines used and a race less driven.

In 1978, the Monaco Grand Prix was the stage for Patrick Depailler's first win.

On Thursday it didn't quite look like it for the Frenchman. After the first day, the Tyrrell driver found himself in sixth place, a second and a half off provisional polesitter Carlos Reutemann in the Ferrari. Between them it was Niki Lauda in the Brabham, Lotus ace Mario Andretti, the second Ferrari of Gilles Villeneuve and 1976 World Champion James Hunt in the McLaren.

On Saturday Depailler was one of the drivers to book some progress, which brought him into fifth place as Brabham's John Watson was the one driver to make more progress. The Ulsterman jumped from seventh to second, between Reutemann and Lauda. The second row was completed by Andretti. The two first rows must have some fear as behind them was a group of drivers who were known to be a little wilder than the rest. Depailler was followed by Hunt, Lotus driver Ronnie Peterson, Villeneuve and Wolf's Jody Scheckter.

On Sunday things started in typical Monaco fashion: spectacular and chaotic. Reutemann got off the grid slowly and going into Ste.Devote was rammed by Lauda. In order to avoid Reutemann, Hunt drove into the guardrail and from there into the pits. With two gone up front, Watson found himself the leader with Depailler in second ahead of Lauda.

In the first half of the race nothing much changed. Watson was wide enough to keep Depailler at bay, who in turn fended off Lauda successfully. However, Depailler's constant pushing did have the effect that Watson wrecked both his tyres and brakes. When the Brabham driver missed a corner, Depailler grabbed the lead and Lauda moved along with him. Far behind them Andretti, Scheckter, Villeneuve and Peterson fought a close fight.

However, a few laps later Lauda was forced into the pits with a puncture. The Austrian rejoined in sixth behind the group from which Andretti just disappeared into the pits as well with an assortment of troubles. For Depailler this was good news. The Frenchman didn't have the pressure from behind for the last 30 laps.

Unsatisfied with sixth, Lauda threw all caution overboard and drove like a madman in order to gain a few points more. Peterson was the first of the group ahead of Lauda to drop out as the Swede retired with a missing second gear, something not entirely unimportant in Monte Carlo. Five laps after Peterson, Villeneuve waved the charging Lauda past in the knowledge that there was no way he could keep the Austrian at bay. Less than a lap later the Ferrari driver's race was over. His left front tyre blew at high speed, sending the car into the barrier. While Lauda undeniably drove one hell of a race, it was only problems for those ahead of him that brought the World Champion forward. Three laps after Villeneuve's exit, Watson once again missed a turn and saw both Scheckter and Lauda go by.

In the dying laps Scheckter, like Peterson, missed a gear. Lauda moved into second and Scheckter only barely fended off Watson for third. However, some twenty seconds ahead of Lauda the chequered flag had been waved for Patrick Depailler. In his 69th race the Frenchman was finally victorious. After 15 earlier visits to the podium, the Tyrrell driver at last can climb the top step.

Twenty two years ago this week, and for the first time since 1970, Formula One was back at Spa-Francorchamps. Back then the 14-kilometer long circuit had been deemed unsafe. However a $2.5 million revamp and shortening to seven kilometers brought the race back to the Ardennes. 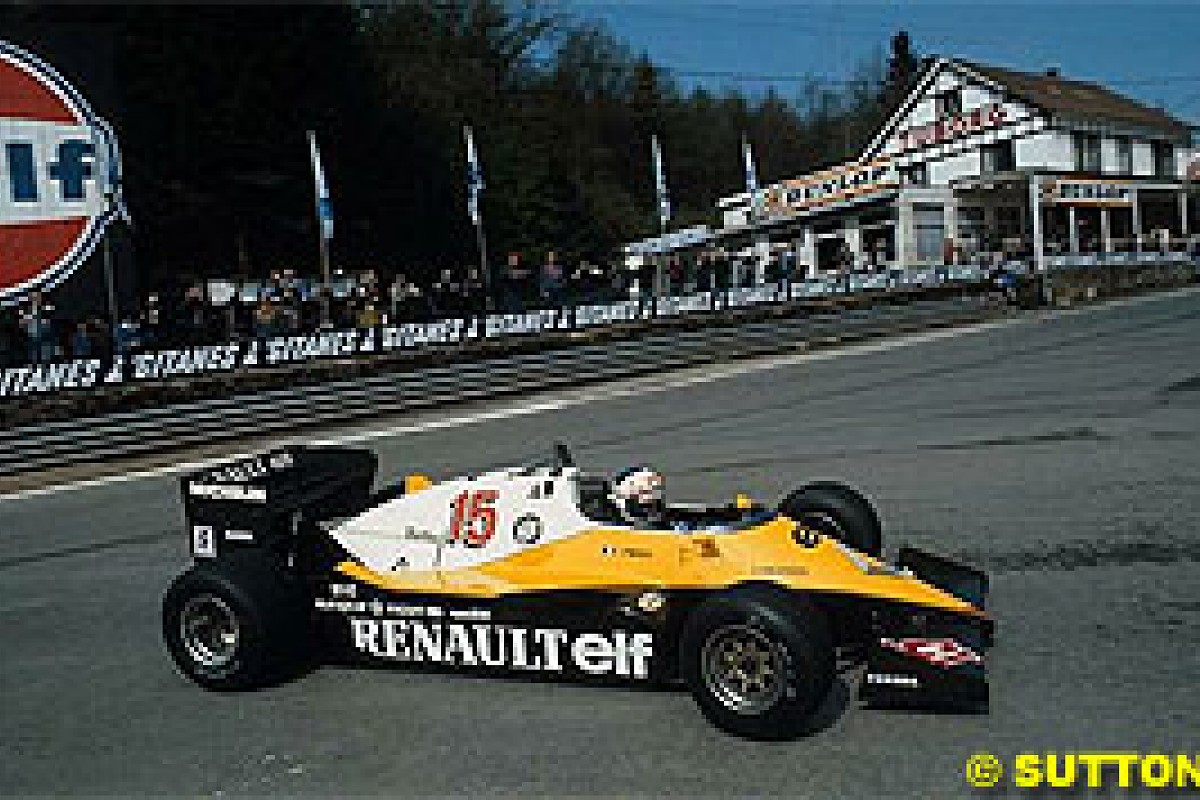 In Friday qualifying it was two Frenchmen and an Italian ahead. Alain Prost set the fastest time in his Renault, followed by Ferrari's Patrick Tambay just eleven thousands of a second behind with Andrea de Cesaris in the Alfa Romeo third two tenths behind the duo. Nelson Piquet was fourth, but the Brabham was already a full second behind Prost. Behind them the differences are big. Surprising seventh was Manfred Winkelhock in the BMW-powered ATS. It was clear that this was a turbo only circuit. First non-turbo driver was Keke Rosberg, who put his Williams in ninth place.

Saturday then proved useless as the rain kept coming down, causing standing water on the track. Most drivers only went out for a quick check on their car's performance in the rain, while some even opted to not go out at all.

When the cars rolled to their grid positions on the sunny Sunday, Arrows driver Marc Surer's gearbox failed. The Swiss driver waved his arms and the starting procedure was abandoned. At the second start it was Andrea de Cesaris who moved past Prost into the lead. Arnoux grabbed fourth from Piquet, while the Brazilian's teammate Riccardo Patrese didn't even complete the first lap with an engine failure.

For the first eleven laps the top eight remained unchanged. Then Winkelhock headed into the pits for a lengthy stop, which put Rosberg into the points. Just before the pitstops one other change took place: Piquet finally overtook the struggling Rene Arnoux. While de Cesaris had been leading comfortably, his pitstop put a big dent in his chances. After that, it was Prost in the lead with Tambay ten seconds behind and Piquet in third ahead of Rosberg, while de Cesaris found himself back in sixth place.

Two laps after de Cesaris Rosberg pitted, followed by Tambay in the next lap. Both Prost and Piquet waited long to go in. After 23 the leader pitted, briefly allowing the Brabham driver in the lead. The very next lap Prost was back after an excellent stop. With all the stops done, the Frenchman led ahead of de Cesaris, who was nine seconds behind him. Behind the Italian Piquet was third at a safe distance, with Tambay, Prost's teammate Eddie Cheever and Keke Rosberg completing the point-scoring positions. The rest of the field by then was over a minute behind and didn't play a part anymore.

A lap later it was all over for de Cesaris. The Alfa broke down, leaving its driver in tears. Towards the end of the race Piquet's gearbox also gave up, allowing Tambay and Cheever past him and onto the podium. After the race it took a few hours for the results to become official as protests flew in every direction. In the end only Renault were fined for having brought fuel on the grid between the two starts, but the result stands.