Maverick Vinales led a Yamaha 1-2 ahead of team-mate Fabio Quartararo at the post-Catalan Grand Prix test on Monday at Barcelona.

Most of the field remained at the Circuit de Barcelona-Catalunya circuit for the second in-season test day of 2021, though Aprilia’s Aleix Espargaro sat it out due to some swelling in his arm – a legacy of recent arm-pump surgery.

LCR’s Takaaki Nakagami led the opening hour of running with a 1m40.648s, the Honda rider aiding in HRC’s extensive testing programme spread between all of its riders.

The session was red-flagged around 45 minutes in due to a crash for Avintia’s Luca Marini, though the Italian was unharmed in the spill.

Franco Morbidelli didn’t have any new items to test on Monday and focused largely on set-up work, the Petronas SRT rider fastest after hour two on his Yamaha with a 1m40.22s.

Reigning world champion Joan Mir led the session after the third hour with a 1m39.816s, with a spokesperson from Suzuki stating the Spaniard’s programme consisted of testing bike and electronic set-up ideas, but no new developments.

Mir’s time stood as the benchmark for a good while, before Quartararo took over with a 1m39.537s to end the sixth hour on top. 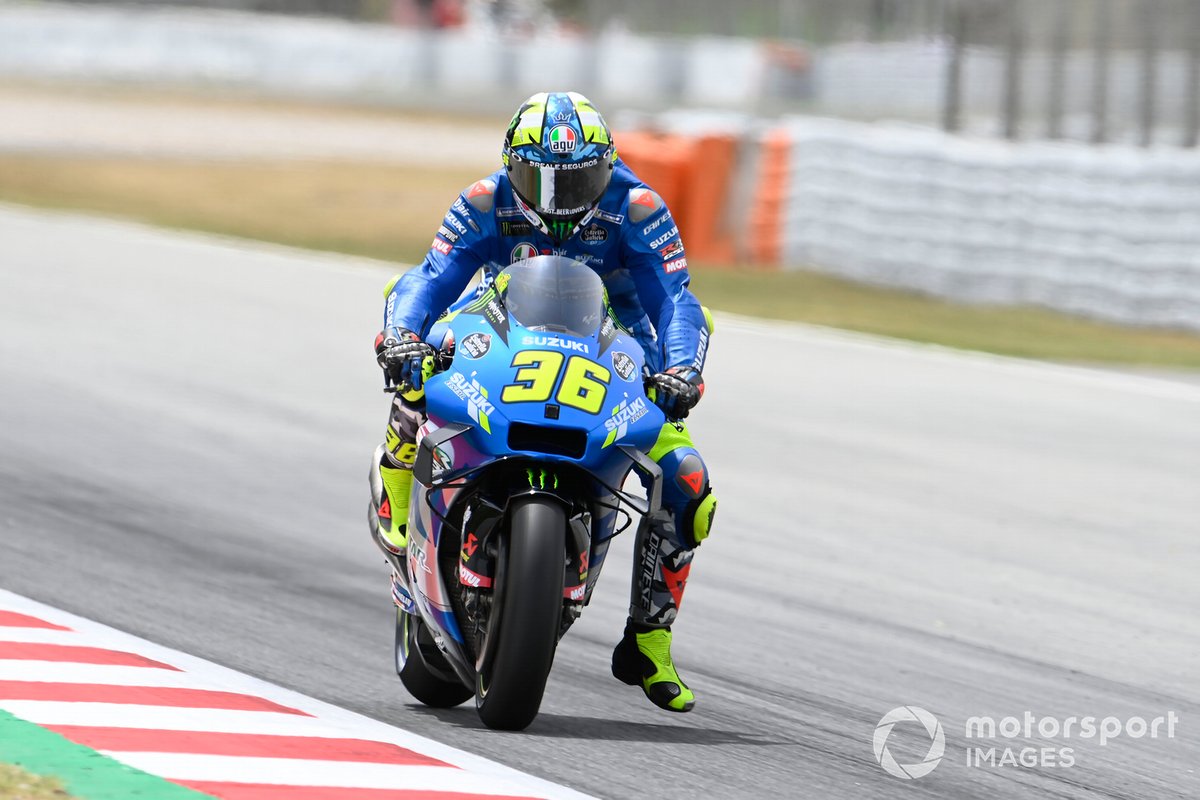 Quartararo admitted on Monday afternoon that he should have been disqualified from Sunday’s Catalan GP for riding with his leather race suit open in the closing stages.

With just under 50 minutes of the session remaining, his Yamaha team-mate Vinales took over top spot with a 1m39.516s, before bettering this to a 1m39.400s.

Both factory Yamaha riders worked on basic set-up ideas, while Vinales also tried a new chassis and carbon swingarm as he worked on his end-of-race pace.

Nakagami completed the top three ahead of Mir and Ducati’s Francesco Bagnaia, who crashed at Turn 5 in the afternoon.

Pol Espargaro also had a crash on Monday at Turn 9, but the Honda rider was sixth ahead of Pramac’s Johann Zarco, Morbidelli, race winner Miguel Oliveira on the KTM and the other SRT Yamaha of Valentino Rossi.

Marc Marquez showed clear signs of his physical condition improving as he completed 87 laps on his Honda in 11th, 0.654 seconds off the pace, ahead of KTM’s Brad Binder and Marini.

Jack Miller joined his Ducati team-mate Bagnaia in the Turn 5 gravel trap and was 14th ahead of LCR’s Alex Marquez.