The Yamaha rider finished the two sessions in 16th and 15th respectively, ending up 0.936 seconds slower than points leader Andrea Dovizioso in a dry practice one and 1.4s down on surprise pacesetter Hector Barbera after rain hit for second practice.

It means Rossi risks having to fight his way through Q1 on Saturday, which is again expected to be wet.

The 38-year-old's first session was also compromised by a technical issue that caused his bike to stop early on, forcing him to return to the pits and switch to his second bike, without the new chassis he took to victory last time out at Assen.

"Very difficult day, very frustrating, because I was in trouble in both conditions," surmised Rossi.

"In the dry this morning I was not so bad, especially with the medium tyre, I felt quite good.

"I had a technical problem on the bike with the new chassis, but we continued with the other one.

"The pace was quite good until the last 10 minutes, when we tried to make the time attack, but I didn't have any feeling with the front tyre, I was in a lot of trouble and I was slower than with the harder tyre.

"It was quite frustrating, because it was important to try to stay in the top 10 to go to Q2, but... no way.

"In the wet, I was more optimistic because last year I was strong, but with the new asphalt we are a lot in trouble. We are not good with the balance of the bike and I'm always very slow." 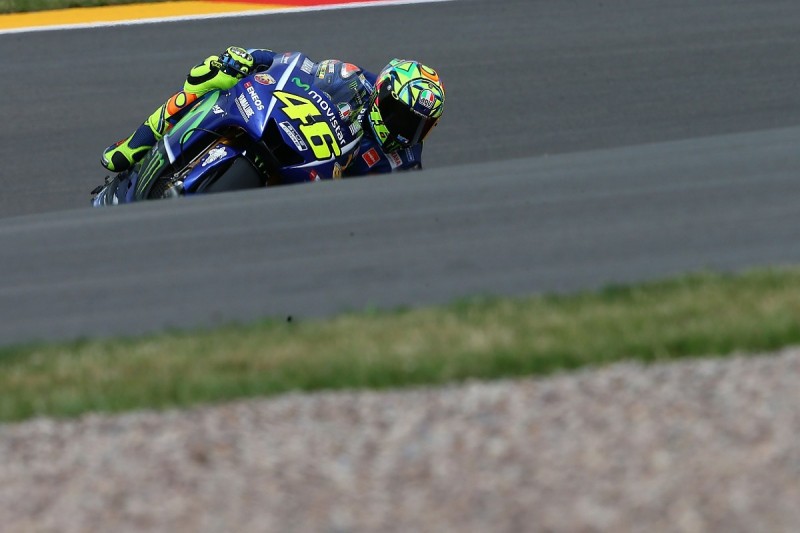 Rossi was keen to stress that the new surface at the Sachsenring was not to blame for his troubles.

Asked what he made of the new asphalt, he said: "For me the Tarmac is very good, they did a good job. The situation with the bumps has improved a lot, and the asphalt has more grip.

"The problem is for us, not the track."

Rossi's Yamaha team-mate Maverick Vinales also struggled to make an impression in the wet on Friday, ending up down in 20th, but set the second-fastest time in first practice, just 0.038s behind Dovizioso.

"This morning I was quite happy with how the bike was working, quite consistent, with all the tyres we tried, quite good, really stable," said Vinales.

"But in the afternoon I don't know why we're struggling so much on the wet.

"It's not normal, normally we were competitive - not the best one, but competitive. But here it's a totally different feeling.

"Honestly, the braking point is quite OK, but when I release the brake, then a lot of problems come.

"So we have to work hard, in case tomorrow it's wet."