Valentino Rossi's crash on the first day of MotoGP winter testing at Valencia was on Yamaha's 2017 bike, in which an upgraded engine did not meet expectations

The Italian started his programme on his 2016 bike, but then switched to the '17 variant featuring an updated engine aimed at improving top-end speed.

He then, though, became the first rider to crash - three-and-a-half hours into the day at Turn 10 - and could not use the 2017 M1 again, but Rossi hopes it is repaired for use on Wednesday.

"It's a positive day because I'm second and the lap time is not so bad, but I did it with the old bike," Rossi said.

"The chassis, the first feeling was OK, but unfortunately I crashed - I put the hard front [tyre] on but on the right with our bike, there's not enough grip.

"And unfortunately I crashed with the new chassis, I damaged the bike and I didn't have time to re-use it.

"So now the guys work and I will try to the new chassis another time tomorrow and we'll see."

Rossi was less impressed with his first taste of Yamaha's upgraded engine, the shape of which adds an extra bulge to the top of the chassis, believing there is "not a lot of difference".

"We tried the new engine which is essentially not fantastic, I expected more," he admitted.

"We didn't improve a lot. It's just the first version, but I think we have to work." 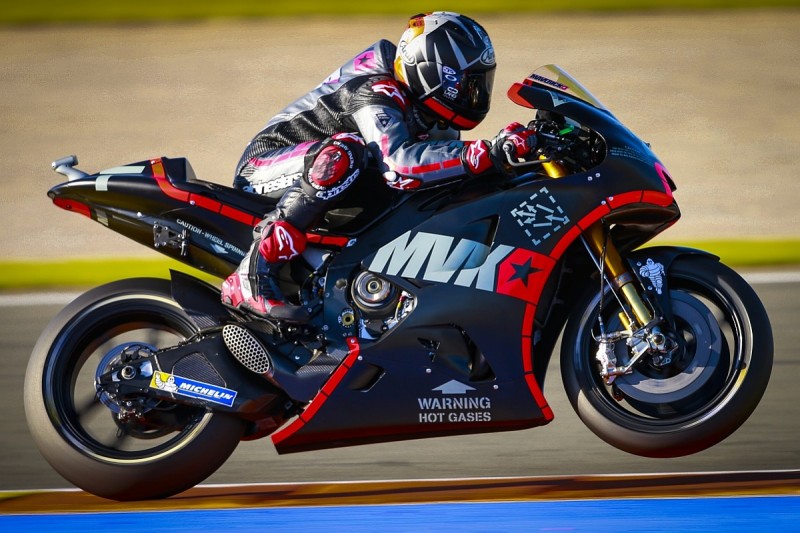 Arriving to replace three-time MotoGP champion Jorge Lorenzo, Vinales settled in quickly, and displaced Rossi at the top of the times with 90 minutes remaining.

Rossi said that the pace of Vinales and Lorenzo was no surprise.

"Vinales is first, so it's a great debut," he said.

"But I expected that he would be fast from the beginning.

"Also Lorenzo in the end was good, but also Iannone was fast from the first laps, so I think very positive first day for them."