Suzuki now has a bike capable of "winning" in MotoGP according to Alex Rins, who scored the manufacturer's first podium finish since 2016 in Argentina

Rins finished third at Termas de Rio Hondo earlier this month, which marked his best finish to date in the premier class, after a race-long battle with Cal Crutchlow, Johann Zarco and polesitter Jack Miller for victory in a chaotic encounter.

The Spaniard led one lap late on after passing long-time leader Miller, but ran wide on the following tour and eventually took the flag 2.5 seconds behind winner Crutchlow.

Rins said he was convinced Suzuki's GSX-RR can now challenge for its first win since Maverick Vinales' triumph at Silverstone in 2016.

"I learned a lot by being with the best," said Rins. "On the last lap I saw myself with chances to win, to fight with them [Cruchlow and Zarco] for the win.

"At Turn 7 I had a scare, I closed the front and I almost fell, which cost me any chances of winning.

"But step-by-step this third place can become a victory.

"We are happy, knowing that we have a winning bike.

"I see the Suzuki well compared to the other bikes, we have improved the bike a lot since last year." 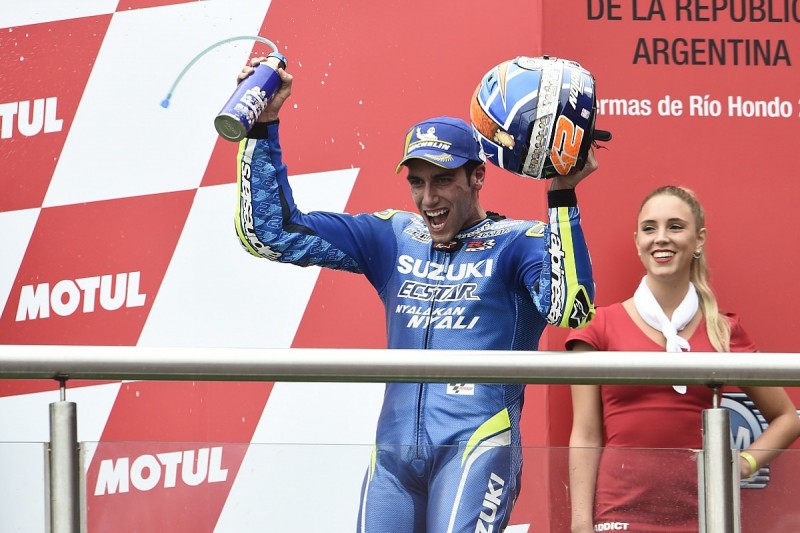 Rins' strong performances for Suzuki since recovering from injuries that hampered his rookie season last year have made the team keen to renew his contract, which expires at the end of 2018.

Asked about his future, the 22-year-old said he expected negotiations on a new deal to begin imminently.

"The important thing is that we are like a family, so I would like to continue here," Rins said.

"I do not see any other option besides Suzuki."

While Rins' future looks secure, Andrea Iannone is understood to be unlikely to be retained by Suzuki beyond 2018.

Ducati's Jorge Lorenzo has emerged as the marque's primary target as a replacement for the Italian.