The 2014 World Superbike champion is making his fourth wildcard appearance for Suzuki this year at its home race at Motegi this weekend, and he is racing the first version of its '20 engine among other developments.

Guintoli ended the day 19th overall after setting his "best time around Motegi ever" of a 1m46.803s running the new engine, which he only tested just a few weeks ago at the Japanese venue.

"We already did some laps [on the engine] in the last test we did here, which was two, three weeks ago," Guintoli said when asked about the new Suzuki motor.

"Obviously, when you bring something new like that it takes some time to adjust.

"But already this is encouraging because this afternoon, that was my best time around Motegi ever. "I never did a [1m]46s before here, so overall this is a good sign."

Though Guintoli was forbidden to go into any detail on where the new engine is stronger, he says it is now a case of working "on the little bits" to not rob it of the "already very good" character of the current version. 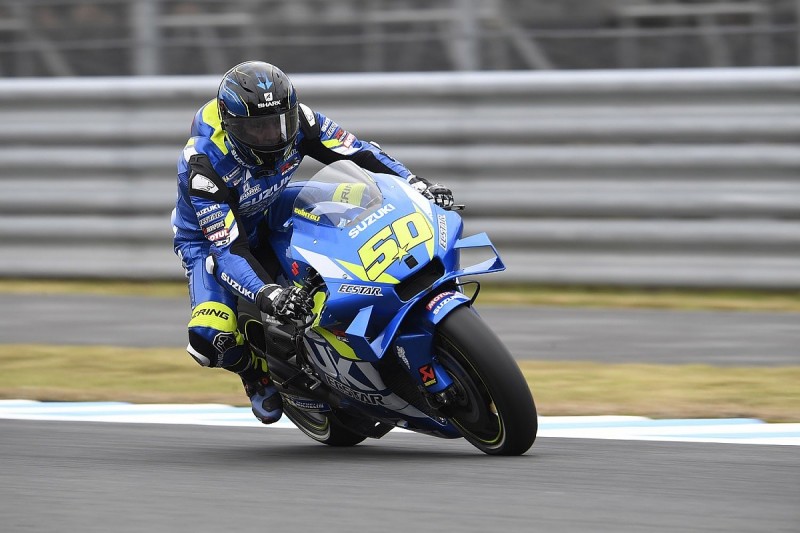 "The first impression is very good," he added. "That's nice. We already identified some strong points. I can't give you any details, unfortunately, but the actual engine and character of the bike is already very good.

"So, we don't want to be taking things away [from that], but at the moment we can see already with this prototype some positive points.

"Now we have to work on the little bits so we don't lose the character."

When asked if more speed was the ultimate aim of the new engine, he replied: "Not necessarily. We are looking for different aspects.

"Obviously more speed is always better, but we are also looking at different aspects."

Suzuki's current engine took a respectable step forward from 2018 in terms of top speed, with Alex Rins fourth-fastest through the FP2 speed traps at Motegi at 309.4km/h (192.3mph).

This matched Andrea Dovizioso on the famously rapid Ducati, and Rins was just 1.2km/h (0.75mph) off of the best speed set by Pramac Ducati's Jack Miller.

However, the speed trap figures available do not take into account other factors, such as slipstreams and engine mapping modes riders used at the time.

Suzuki will be wary of trying to squeeze any more power out of its engine, after a wrong engine choice for 2017 severely affected the GSX-RR's famed handling.

This year's Honda has been lambasted by its riders for being difficult to ride due to its powerful new engine, which has been able to match the power of the Ducati - another bike which has typically been weaker in corners.

Lorenzo: Motegi MotoGP Friday my best on the Honda since Assen crash