Iannone has joined the Japanese manufacturer after spending his first four seasons in MotoGP on Ducatis, which traditionally dominate speedtrap listings.

Suzuki made genuine improvements with its engine last year, its second season back in MotoGP after three away, and its GSX-RR was good enough for Maverick Vinales to win at Silverstone and finish fourth in the championship.

It has elected to largely consolidate rather than overhaul its package, and it sits only ahead of newcomer KTM in the manufacturers' championship after a tough first two grands prix.

While Iannone was in the fight for second in Qatar before crashing out, the Italian was only 15th on the race speedtrap data, giving up nearly 7mph to Jorge Lorenzo at the top.

In Argentina, Iannone jumped the start and finished 16th and out of the points after serving a penalty, and was again 15th on the speedtraps and losing 5mph to the benchmark set by Aspar Ducati's Alvaro Bautista.

"I think it's a problem at the moment," Iannone conceded.

Asked whether anything could be done to improve the situation in 2017, he said: "During the year it's impossible. Next year, maybe.

"But this year it's this [situation]. For sure I'm not very happy about the top speed.

"We will fight with this." 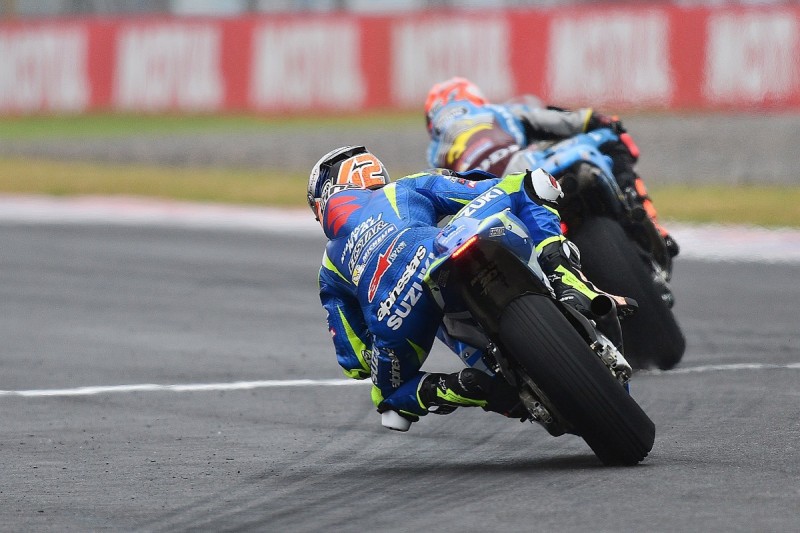 Rookie team-mate Alex Rins was 16th on the speedtrap order in Qatar - where he finished as the top rookie in ninth and scored Suzuki's only points of 2017 so far - and then last in Argentina, riding with a partially-fractured right ankle.

Iannone struggled in the wet qualifying session at Termas de Rio Hondo, the slowest rider in Q2 with a time more than three seconds off Marc Marquez's pole time.

Losing rear grip in the warm conditions over a longer run and in the wet frustrated Vinales last year, and Suzuki boss Davide Brivio described improving in the latter as its winter "homework".

However Iannone said "everything was difficult" during qualifying in Argentina.

"In these conditions I have too many problems," he said.

"Riding without feeling in these conditions is very difficult.

"I am not surprised for the result, when I ride I understand that I can't ride very fast, but also the feeling with the bike is not very good at the moment.

"For sure we will try to improve, we will work to learn about this situation and hope in the future we have less problems."