Takaaki Nakagami pipped Fabio Quartararo in a tense FP3 for the MotoGP Spanish Grand Prix, while Marc Marquez missed Q2 after a big crash late on.

So fine were the margins in third practice at Jerez that just 0.098 seconds covered the top seven, while the gap covering those who made it directly into the second part of qualifying stood at 0.193s.

Having spent Friday trying to diagnose his Portimao problems, Maverick Vinales set the early pace in FP3 on his Yamaha with a 1m37.889s.

This didn’t move him up the combined order, but Petronas SRT’s Valentino Rossi and Alex Marquez on the LCR Honda immediately found better lap times compared to Friday and moved up to 17th and 18th.

The first major change on the combined order came from Marc Marquez, the recovering Honda rider jumping up to fifth in the opening stages with a 1m37.695s.

Aprilia’s Aleix Espargaro took over top spot in FP3 just over 10 minutes into the session, his 1m37.492s good enough to improve his third place on the combined times.

This stood as the session benchmark for the next 15 minutes, with Franco Morbidelli taking over on his SRT Yamaha with a 1m37.220s – pushing him up to second overall in the process.

Francesco Bagnaia’s Friday benchmark finally fell with 15 minutes of the session remaining when Fabio Quartararo went fastest overall on his Yamaha with a 1m37.010s. 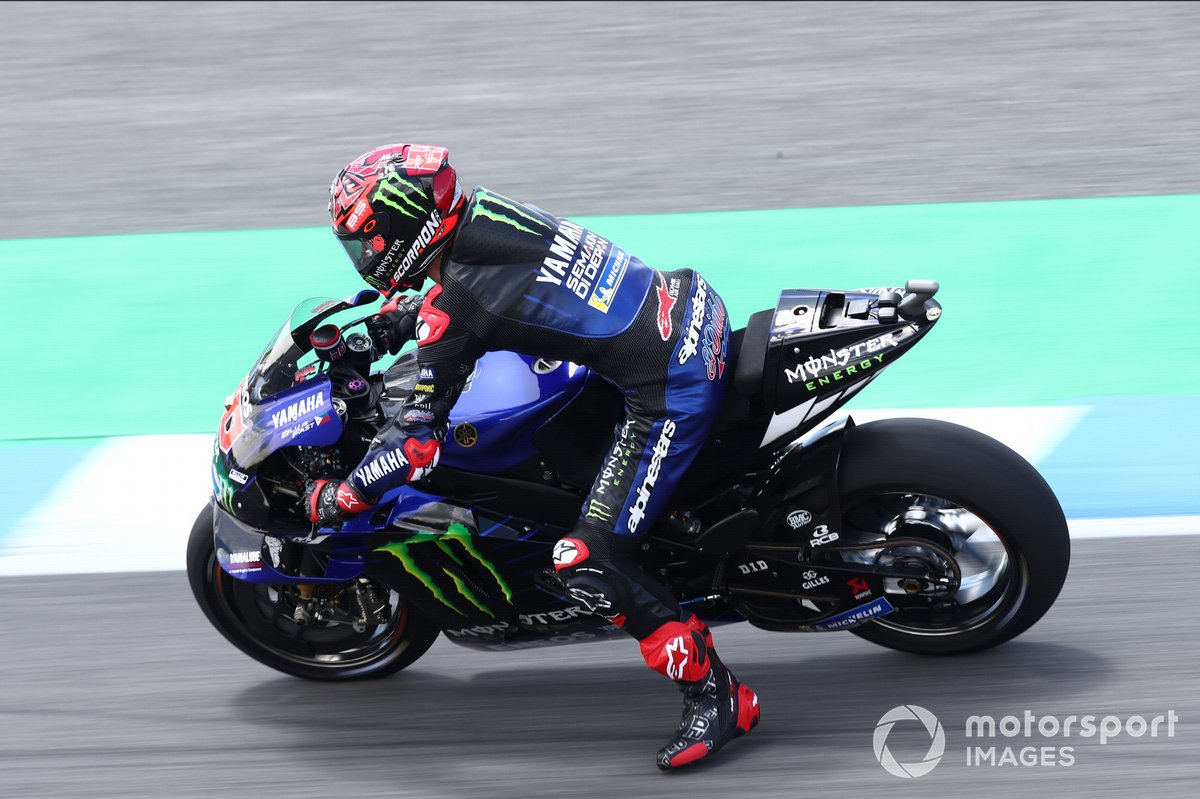 Moments later Morbidelli blasted the field away with a 1m36.684s, but had this lap scrubbed for exceeding track limits.

This left the door open for LCR’s Nakagami to move up to top spot with his effort of 1m36.985s as he elected to run an older Honda frame having back-to-backed the 2020 and 2021 frames on Friday.

Quartararo put on a late charge to try and reclaim top spot, but missed out on Nakagami’s best by 0.025s.

HRC test rider Stefan Bradl led the Honda charge in third, while Mir made it directly into Q2 for the first time this year ahead of Aprilia’s Espargaro.

Vinales completed the top six ahead of Morbidelli, while Bagnaia on his Ducati leaped up to eighth at the death having sat outside the top 10 when the chequered flag fell.

Ducati stablemate Johann Zarco on the Pramac GP21 and the second Suzuki of Alex Rins secured the final direct Q2 slots, with Bagnaia’s late improvement dumping his team-mate Jack Miller out in 11th.

Marc Marquez ended the session 12th but suffered his first big crash of his comeback when he slid off at the fast Turn 7 left-hander.

The Honda rider went straight to the air fence but was able to walk away, while his motorcycle was wrecked in the tumble.

Having gone to the medical centre for checks, Honda confirms Marquez "has no major injuries, suffering only a contusion".

KTM’s Brad Binder was the other faller in FP3, the South African suffering a strange crash at the Pons right-hander midway through the session when he appeared to lose it on the grass on the way into the corner.

He will face Q1 with KTM team-mate Miguel Oliveira, who was 16th, while Valentino Rossi’s woes continued on his SRT Yamaha in 15th.