Instead of going ahead at 1pm UK time as was originally planned, the race will now be held at 11:30am, prior to the Moto2 and Moto3 races.

The Moto3 race will now run at 1pm, followed by Moto2 at 2:30, weather allowing. MotoGP warm-up has also been moved to 9am, 30 minutes earlier than planned.

Rain is expected virtually throughout the day on Sunday, but is forecast to be at its heaviest around 1pm.

Heavy rain in FP4 prior to qualifying doused the track and led to a multi-rider crash at Stowe that resulted in Avintia Ducati rider Tito Rabat being hit by another bike and hospitalised.

Multiple riders suggested after qualifying that the race could take place in similar conditions.

"I don't like to say this, because I love racing, but if conditions are like in FP4 we cannot race," said the reigning champion.

"Tomorrow the forecast is for much more water. The aquaplaning was amazing. 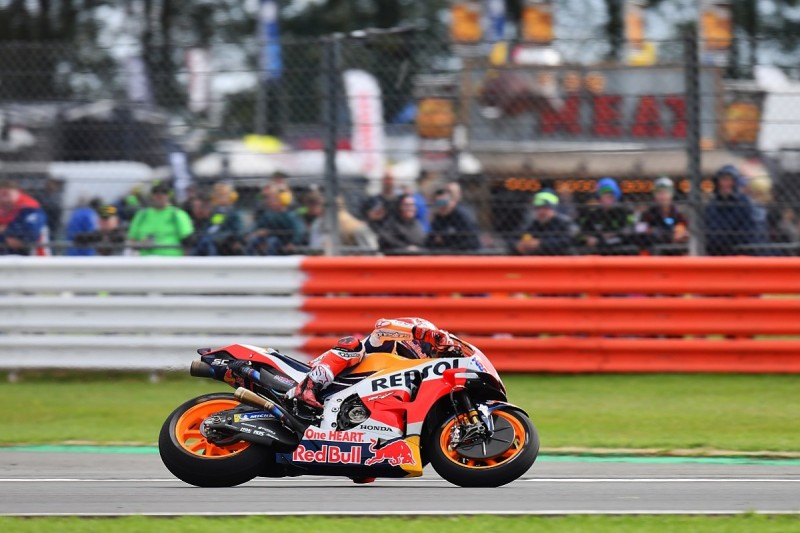 "The problem is the bumps. The water gets inside the bumps, then you have aquaplaning where you don't expect it, because you don't have the same amount of water everywhere.

"Where the bumps are, there is much more water."

Other riders, including Valentino Rossi, suggested the new surface not draining properly was also causing problems.

Prior to the decision to adjust Sunday's schedule, Cal Crutchlow suggested the best course of action would have been to delay the race until Monday - which is a bank holiday in the UK.

"It could be a disaster, because today under one millimetre of rain was forecast," said the LCR rider.

"Tomorrow 15mm, 16mm of rain is forecast. So either we'll be racing on the Monday or we'll see you in Misano.

"If you want to see a race, it's a bank holiday Monday, just stay here.

"Honestly speaking I don't think you can ride on a circuit that was like Turn 7 for the rest of the circuit - you wouldn't even make it round."

But Tech3 Yamaha rider Johann Zarco, who qualified third, warned that the change to the schedule may not be enough to ensure the race takes place if persistent rain in the morning soaks the track.

"If it's raining from the morning, 6am, and it keeps raining, not even strong but all day, it won't be possible to race because I think there will be too much water on the track," said the Frenchman.

"It was only raining five or 10 minutes, it was one big cloud and this made big trouble.

"If tomorrow we have constant rain, I think it's [the race] not possible."