Jorge Lorenzo admits he nearly ceded British Grand Prix victory to Marc Marquez, but had a sudden change of heart that prompted his final-corner pass

Lorenzo and Marquez spent the first 17 laps of the MotoGP race locked together, before Marquez finally made his move at Brooklands - the first exchange of a dramatic close to the race.

Lorenzo was able to reassert himself at Vale one lap later and therefore led heading into the final lap, but a mistake under braking at the Loop left him vulnerable to Marquez, who duly hit the front once more at Brooklands, the penultimate corner of the race.

While he attempted to stick it out on the outside line, Lorenzo said he had almost resigned himself to following Marquez home before resolving upon the do-or-die move at Luffield that earned him a first victory in six races.

"When he passed me I thought 'OK, second', but then suddenly I thought 'I have to try' and when he opened the gap a bit, it was now or never," Lorenzo explained.

"Thankfully we didn't crash, and I'm so pleased with the win. This is one of the best victories in my career.

"I pushed from the beginning as always, trying to open the gap, but it was impossible: even after his warm-up [crash] Marc was very brave and never gave up.

"When he came past I studied him for one lap, saw he was struggling a little bit in braking and overtook him, then tried to push and open a little gap at the end. 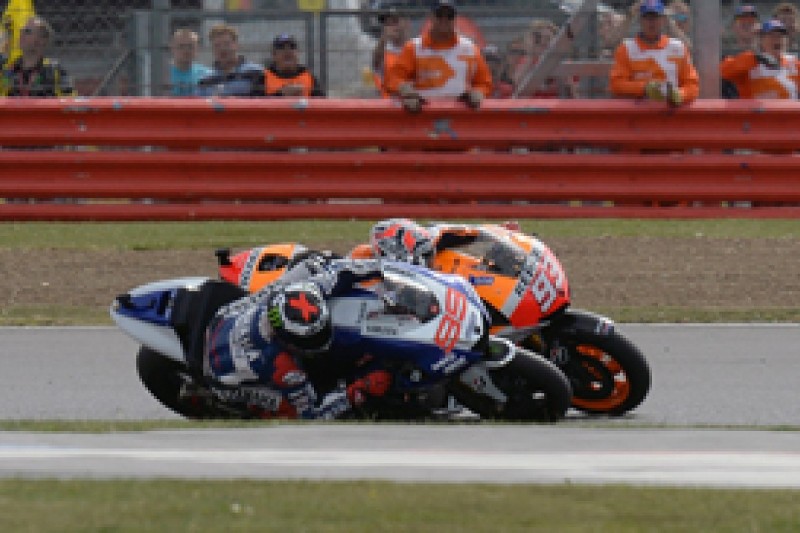 "But on the last lap I made a mistake and almost crashed. It was a very emotional race, and a very important win."

Asked if he had been expecting a last-gasp Marquez attack, particularly given their collision in a similar position at Brno, Lorenzo added: "When I started the last lap I said I have to be very fast and open a gap to avoid Marquez trying anything.

"I knew he was quicker [under braking] because every lap I heard his engine coming, and he could make a more inside line than me.

"Finally he did it at Brooklands, but thankfully he left a little gap."