Scott Redding says his priority is to stay with the Pramac Ducati MotoGP team in 2018, but he admits that is currently out of his hands

The Briton joined the satellite outfit last year, after spending his first two seasons on Hondas, and ran as high as 10th in the championship mid-season before finishing 15th.

With that, he also lost an intra-Pramac battle across the second half of the campaign with team-mate Danilo Petrucci to ride a 2017 Ducati this year.

On the 2016 bike, Redding finished the first two races in the top 10 and sits 12th in the standings, two spots behind Petrucci, who grabbed a podium at Mugello.

Out of contract at the end of this year, Redding wants to stay, but says he is waiting to learn Pramac's plans.

"It would be nice to stay here with this team, but if they don't want to keep me I need to look for other options and go from there really," he said.

"It's down to these guys more than it is to me. Obviously my priority would be to stay here because I think Ducati suits me.

"It's quite a competitive bike but it depends if they want to keep me or maybe not.

"That's kind of what it comes down to, and we have to see from there. 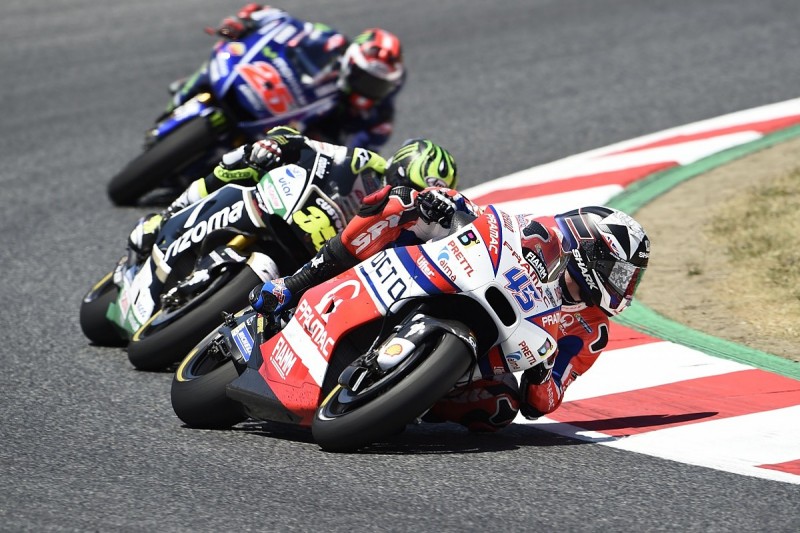 "If they don't I need to look for something else, if they do, great.

"It's hard to really say a time [when things would be sorted].

"Maybe the more time the better because there's more time to show myself.

"But it's kind of a bit shit that you have to be in a position to show yourself."

Redding started the season with a seventh-place finish in Qatar and happier to be on the older Ducati, as Petrucci encountered teething problems with the 2017 bike, which is now pulling clear with development.

Of the three riders on 2016 Ducatis, Alvaro Bautista is 11th, Redding 12th and Hector Barbera 16th in the championship.

"It's making the best of a kind of bad scenario, which isn't actually that bad," the 24-year-old said.

"I've been in this paddock for a few years now, I've been in MotoGP a couple years but nothing's really going forward.

"Yeah, I'm showing myself sometimes in practice, when I have a good race something happens with the bike.

"So I need to kind of see where it takes me, I'm not really in a position to say 'I want this, this and this' because I'm not not showing the potential, but the results on paper are not coming to what even I expect."