Francesco Bagnaia believes the current situation with the track surface at the Circuit of the Americas is worse than at Silverstone during the cancelled 2018 MotoGP race.

The Texan venue near Austin was savaged by most riders on the grid following Friday’s practices owing to the poor surface riddled with vicious bumps.

Yamaha’s Fabio Quartararo labelled it a “joke”, while Aprilia’s Aleix Espargaro went as far as to say he doesn’t think it’s safe to race on it on Sunday.

Ducati’s Bagnaia, who is fighting for the championship and currently sits 48 points behind leader Quartararo, believes that the track is currently “over the limit” with regards to safety.

When asked if any lessons could be learned from what happened at Silverstone in 2018, when a badly-resurfaced track could not drain water properly and forced the race to be cancelled, he said the current situation with COTA is worse.

“No, will not be possible, I think,” when asked if cancelling Sunday’s race was an option.

“We are here, we have to race. I don’t know, we will speak in the safety commission.

“I’m sure that some riders will have the opinion to don’t race, but obviously someone will say it’s raceable and we have to race.

“It’s strange because we are playing to be always [at] the top and [around] this track you can’t go on the limit, because every lap you are over the limit.

“I think it’s over the limit about safety, so we will speak after and we will take a decision. [It’s] a lot worse than Silverstone, I think.” 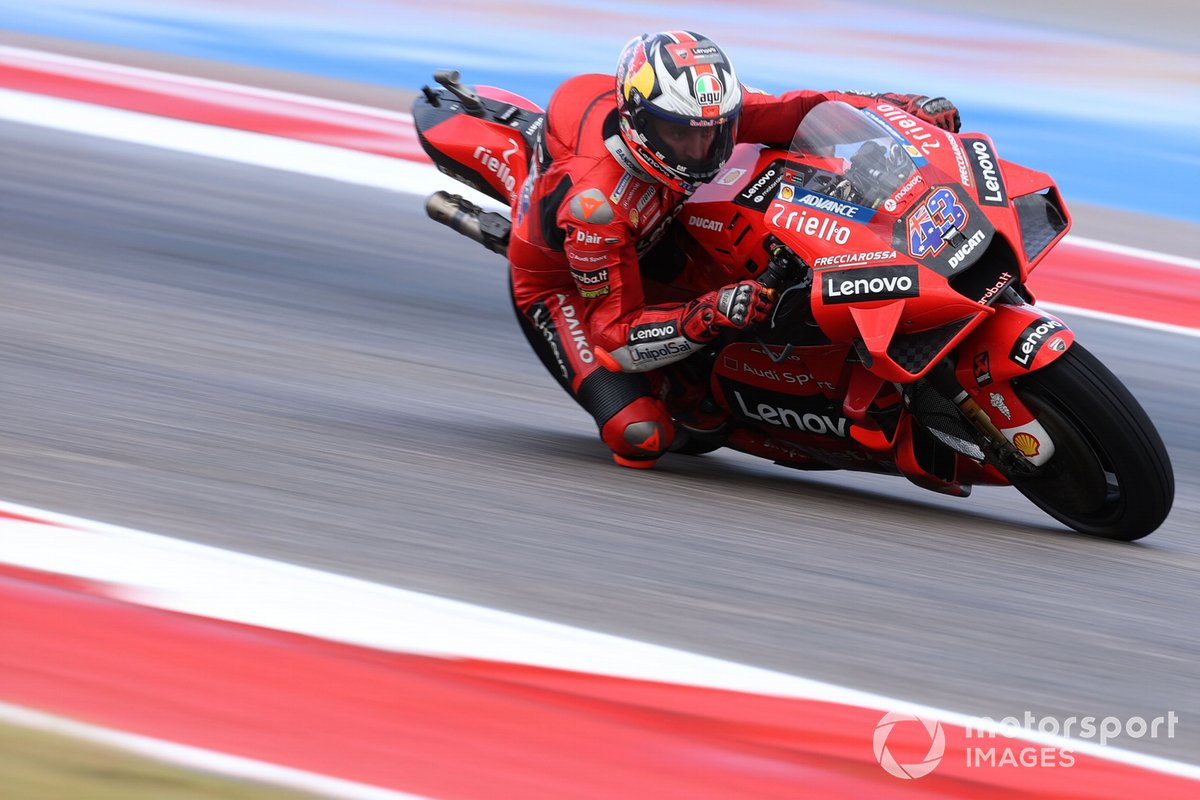 Miller: Ducati is “phenomenal” around COTA

Bagnaia’s team-mate Jack Miller was one of the few riders to downplay the dangers of the circuit, after ending Friday second overall and just 0.015 seconds off the pace set by Honda's Marc Marquez.

Miller was on the podium in MotoGP’s last visit to COTA in 2019 and monstered the field in the first sector on the individual split times – going two tenths quicker than anyone. He says the 2021 Ducati has improved “ten-fold” since 2019 and branded it as “phenomenal” through the corners.

“I found a few tricks to get me through there,” Miller said about sector one.

“I was trying to use the soft front and it just wasn’t that great for the rest of the lap on the braking, so I was having to keep a bit of margin.

“I had a couple of moments, but I mean the bike is working really well – not only through the first sector, but also sector four, the 16, 17, 18. It’s phenomenal.

“On the maximum lean angle, arm on the ground, on the gas and it’s still continuing a nice sharp arc.

“You’re able to keep both wheels relatively neutral and the whole way through it feels fantastic, so for sure the bike has improved ten-fold since the last time we were here in 2019.”