Rossi was running ahead of Marquez as the duo were on their last laps in qualifying, and the Honda rider pulled off a tight move at the fast Curvone right kink.

That manoeuvre compromised Marquez's line and he ran off-track, which allowed Rossi, whose lap was ruined by the first move, to overtake him back, with the pair nearly colliding.

Marquez and Rossi were called in by race direction afterwards but no action was taken, while the Honda rider said that he didn't know what Rossi's "intention" was.

But, giving his own version of events, the Rossi said Marquez knew he'd ruin the Yamaha rider's lap with the overtake.

"I was thinking [the spat was more like] Argentina 2018, when he knocked me out without restraint," Rossi joked when asked if the clash reminded him of his infamous Sepang 2015 run-in with Marquez.

"I was on my hot lap, I was pushing 100 percent and he overtook me in the fast corner in Turn 11 and he already made me lose a lot of time.

"But for overtaking me, he went onto the green [run-off], so I tried to stay more inside and tried to re-overtake in the hairpin but I arrived wide. At the end we lose all the chance to do the laptime. 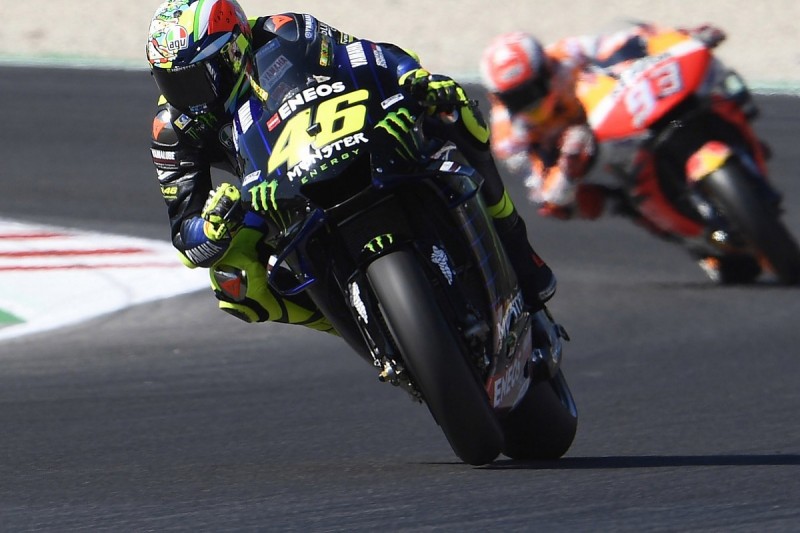 "He tried to pass me in the Curvone knowing that he was ruining my lap and to overtake me he also went [to the] green [run-off]. I then tried to overtake him, but I went a bit long.

"I'm sorry because, apart from this thing that can happen, I was hoping to be faster in qualifying and to start further ahead, because the pace is not bad.

"I'm seventh [on the grid] anyway, but it's going to be tough because there are so many of them who are strong."

Marquez noted that Rossi himself exceeded track limits earlier in the track, but Rossi explained that he wasn't sure if he went off-circuit, so he kept pushing for the rest of the lap.

"I didn't know that I touched the green [paint]," he said.

"I was pushing and I thought that I was not on the green. I was on my hot lap because it was my last chance. I see later on the paper that I touched the green."