After a difficult 2017 season in which it failed to score a single podium, Suzuki once again has the right to perform unlimited engine development and testing with its factory riders in 2018.

It had these rights for the 2016 season, but lost them for '17 after Maverick Vinales scored the marque's first victory since 2007 at Silverstone.

"I think it's a good rule, honestly," said then-Honda team principal Livio Suppo of the decision to hand concessions back to Suzuki.

"It has been proven the last few years, that to help the manufacturers that are struggling is good for the championship.

"At the moment the competition between all manufacturers is quite close, this is good for the show and this is very important for all of us.

"If Suzuki is struggling but has the possibility to speed up the process of development, it's good.

"What KTM has done this season is amazing; without this rule it would be impossible.

"If now there are all these manufacturers [that] can race very close, one bike close to the other, it's good for all."

Yamaha team boss Lin Jarvis added: "If Suzuki are able to use these concessions to step up their game and become more competitive, it raises the whole level.

"And I think one of our advantages compared to other top motorsport disciplines is that the level of racing this year [2017] has been absolutely phenomenal.

"The more competitive weekends we can have with all manufacturers present, it's better for all of us." 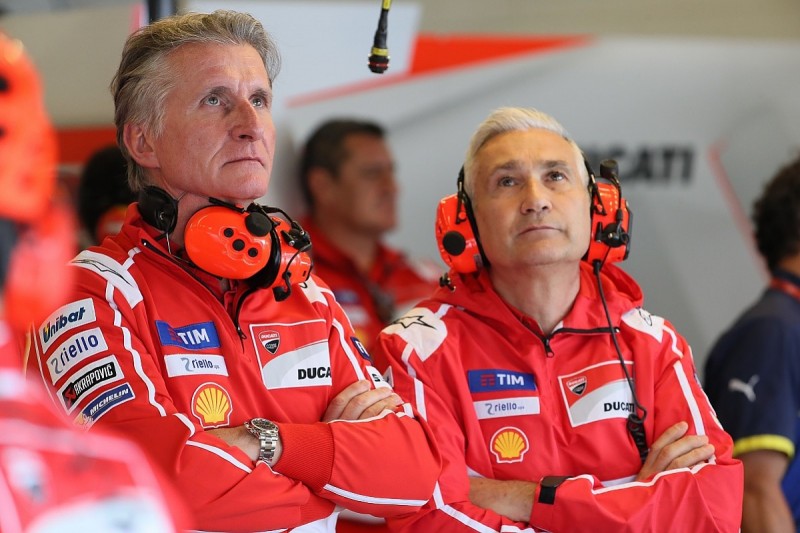 Ducati sporting director Paolo Ciabatti (above, left) also backed the move, highlighting the fact that his team's use of the rules until the end of the 2015 season helped it return to competitiveness.

"Ducati took advantage of these rules when we were not competitive, to be able to step up development of the bike," said Ciabatti.

"And [when] we came to a level where we could score podium finishes, we lost the concessions.

"I think it's a rule that applies to everyone, and it's fair.

"It has helped the championship to become so competitive, allowing new manufacturers to join the series with the chance of getting to the level of the top teams and top manufacturers."

Yamaha would choose Valentino Rossi's team for MotoGP over Tech3