French Grand Prix poleman Fabio Quartararo believes he "will not stay long in first position" in Sunday’s Le Mans MotoGP race if it starts off in wet conditions.

Quartararo snatched his third-straight pole of the 2021 season by 0.081 seconds with a last-gasp effort at the end of Q2 on Saturday to lead Yamaha team-mate Maverick Vinales.

But the day started off in difficult fashion for Yamaha, with Quartararo struggling down in 19th in the drying conditions of FP3.

The Frenchman struggled to ninth from pole in the wet Le Mans race last year, having never previously ridden a MotoGP grand prix in the rain, and admitted when the track isn’t fully wet that the Yamaha struggles for laptime.

With rain predicted for Sunday’s 27-lap race, Quartararo doubts he will head the pack for long after the start if it’s wet but hopes to be able to learn from those around him to understand what they are doing better in the conditions.

Explaining that he “felt really good this morning” despite his times being “far away”, Quartararo said: “The problem is for me I’m riding well.

“I don’t feel so slow, but when you see the position and you are really far down it’s tough to accept. I want to really see different bikes, what they are doing.

“It’s quite clear we lose under acceleration, but maybe it’s the way they carry the corner [speed] or something.

“But for me, starting from pole position, if it’s a wet race we need to be clear – we will not stay long in first position, unfortunately. As soon as a rider overtakes, I want to learn and see what he does different. 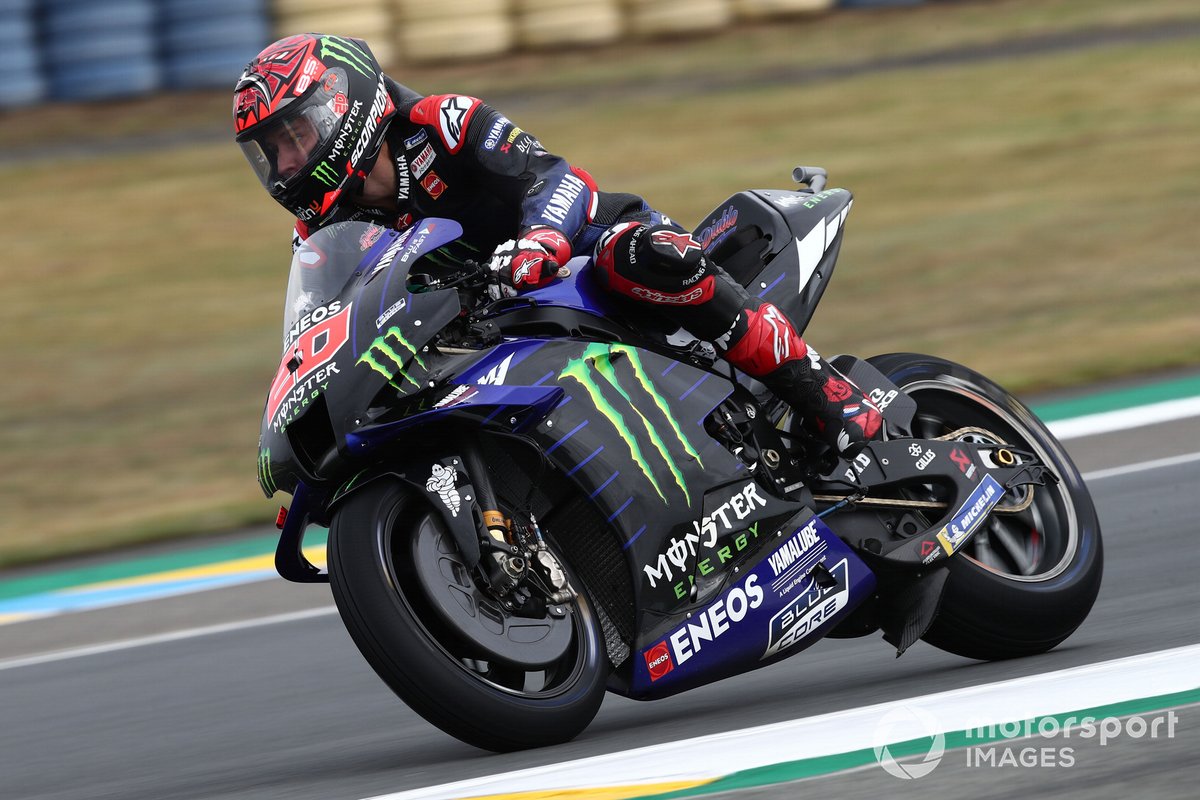 “We have Jack [Miller] on the front row, so I think that he is one of the best in those conditions and I want to see what he is doing different.

“But we will try to find something in the warm-up if it’s wet and try something anyway.”

Quartararo revealed he didn’t think he’d taken pole immediately after qualifying, as he already saw three bikes in parc ferme – with fourth-placed Franco Morbidelli there due to finishing as top independent rider.

“It was a tough day because in first run of FP3 was pretty good, because with more water on the track it’s easier for us,” Quartararo added.

“And as soon as the track was drying up, everyone improved a lot. We improved but almost nothing, so in mixed conditions with wet tyres it’s so tough for us.

“Actually it was good the track was dry for the qualifying. The last sector was a bit tricky at the beginning, but in the last lap I pushed myself to the limit.

“In Turn 11 I was quite close [to the limit], but actually I didn’t even know I had pole because I saw three bikes in parc ferme and in the last moment I saw my mechanics. So, it was pretty cool.”

Quartararo "hasn't signed anything" for 2023 MotoGP season yet