Championship leader Fabio Quartararo admits his third in the MotoGP German Grand Prix “is gold” to him as he struggled all weekend on the factory Yamaha.

The Sachsenring was expected to suit the Yamahas, but that proved far from the case as Quartararo’s Yamaha proved weak in the long left-hand section of sector two all weekend.

Despite qualifying on the front row and showing strong race pace in practice, Quartararo slid to sixth in the early laps and struggled to overtake, which cast him too far adrift of the win battle.

He cross the line over six seconds behind winner Marc Marquez in third, but has extended his championship lead to 22 points over Pramac’s Johann Zarco down in eighth in the race. 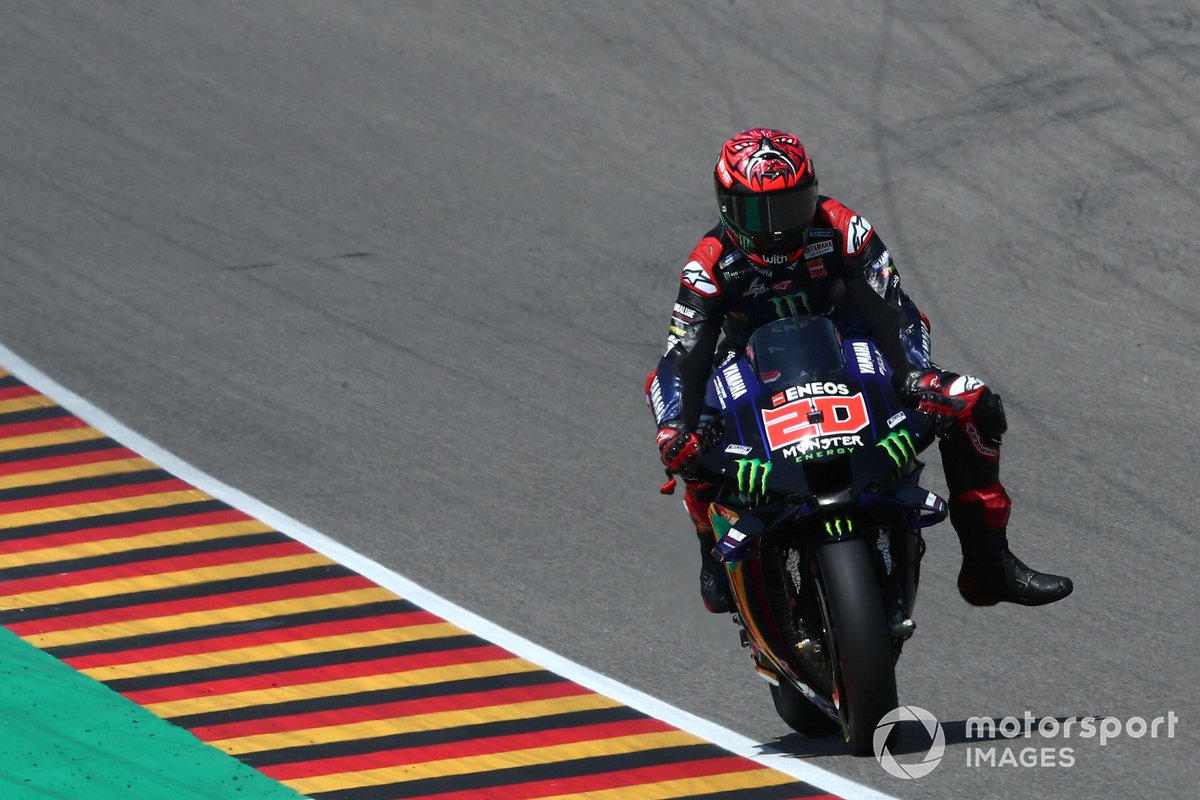 “All the weekend we have been struggling, this morning [in warm-up] I was behind Taka [Nakagami] at Turn 7 I was losing at least two tenths, and in the race it was the same.

“Let’s say I was struggling so much and I feel like this podium is really gold because I fight till the end, I give it all and I think it’s so important for the team because we have been struggling all weekend.

“This one was so tough for us. Now I’m looking forward to Assen, it’s one of my favourite tracks and the Yamaha will go fantastic.

“This morning we saw one of our really weak points in sector two and I knew we were going to struggle.

“It’s what happened in the race, at Turns 6/7 we were extremely slow.

“Then other parts of the circuits were quite ok, but this corner where we stay a long time on the angle we struggled a lot.

“It was quite clear with the team this morning that ok we have a good pace but to fight for the victory it looks like it was difficult.

Quartararo admits his damage-limiting result is “important” but says he will not approach every race thinking like this, citing how Marquez approached their duel in Thailand in 2019 when his sixth MotoGP title was up for grabs.

“Yes, I think it’s important, but I think I have quite a big example for this,” Quartararo said when asked of the importance of his Germany result.

“I remember Marc in Thailand. He just needed to finish in front of [Andrea] Dovizioso to win the championship, we fought till the last corner, last moment.

“I think at the moment to win the championship you need to win and to make podiums.

“So, of course I’m extremely happy to be here and extend the lead.

“But I will go to Assen to fight for the win, not to look at where Zarco is.

“And I think this is the most important thing because we are not even at halfway through the championship.

“So, I think the correct thing is to be in Assen and fight for what we want.”