Pedrosa edged out Johann Zarco and Andrea Dovizioso to grab a third pole of the season in dry conditions on Saturday at Sepang, but slipped to fifth on Sunday as the weather took a turn for the worse.

The Spaniard has struggled in other rain-affected races this year, managing 13th at Assen, 14th at Misano and most recently parking his bike at Motegi with a rear tyre problem.

Those poor results meant Pedrosa anticipated he would quickly tumble to the rear of the pack at Sepang.

"I'm really happy about the result because the expectations for the wet were a disaster, [to finish] last," said Pedrosa.

"I was on pole in the dry and looking forward to racing in the dry. I was crossing my fingers about a dry track.

"It almost happened. But when I start to see the rain, I said [I'll go] from first to last.

"It was quite a shocking change of mind. That's why to finish fifth is quite positive." 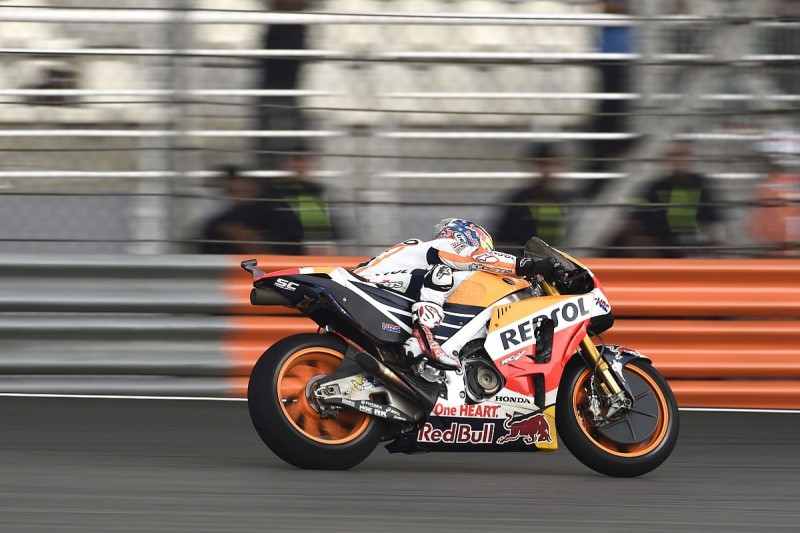 Pedrosa said a set-up change on his works Honda helped him find the confidence he was previously lacking in the rain, but that he still encountered a rear spinning issue that cost him time.

"The team gave me a good bike today," he said.

"We changed the setting and it worked, it gave me confidence, obviously getting more grip on the rear.

"Also we chose the soft rear, which gave me confidence at the beginning.

"The problem was I was spinning a lot and I was trying to keep the rpm low and not go full [throttle] in a straight line.

"So I was losing about one second in the last sector. But it was the way I could finish."

Asked why he chose the soft rear, Pedrosa replied: "Because I can lean the bike. With the hard [tyre] I cannot.

"I knew there was a limit on the centre [of the tyre], but I can lean the bike like this.

"I was starting at the front, [I thought] at least the first few laps I will be there and then see how we can manage."