Espargaro, who had his sights set on KTM's best MotoGP finish after qualifying sixth, was battling champion Marc Marquez for third place when he fell off his RC16.

He pushed it out of the gravel and resumed the race in 18th.

He then began to scythe his way through the field despite riding with a destroyed windscreen.

After a 40-minute red flag brought on by worsening conditions, he lined up eighth for the second start - and battled through to fourth, before Valentino Rossi's late crash gave him and KTM a maiden podium.

"It's unreal," he said. "In the first [part of the] race I felt good. Through all the weekend in wet conditions I was fast and I could do some good laptimes.

"I was fighting against Marc, I saw Marc with some problems with the rear tyre.

"I knew he was not having the same grip as me or the rest of the guys, I tried to overtake him from inside, outside, but Marc was braking so hard and the Honda was really good on acceleration, and I couldn't [pass].

"And for some reason I was so fast in Turn 2, and when you are so fast in one place, you don't maybe need to try hard in that place, maybe in the others, and I tried in that place, and I had an amazing crash, so wild, a big highside.

"And the bike was without the fairing, and I went from last to seventh or eighth. It was wild.

"I don't know how I did it because I could not see much in the straight. The wind was huge, I had problems in my neck because I couldn't manage this speed without the fairing.

"The red flag was like a message - first the bike [is still okay] after this huge crash, and then the red flag. I said to myself 'man, this is your opportunity, just take it'." 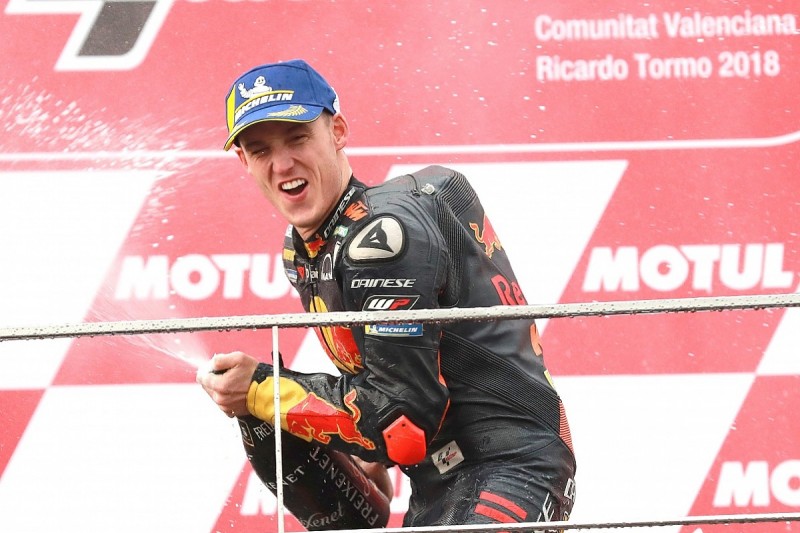 Espargaro admitted he was feeling pressure heading into the race after KTM won in Moto3 with 15-year-old wildcard Can Oncu and Moto2 with Miguel Oliveira.

"I was watching Movistar TV, when I was just waiting for my race, a little bit scared in my chair, looking at the weather and seeing these guys doing these amazing races," he said.

"I said [to myself] 'you are going to look ridiculous if you don't do something good'. I heard [TV presenter] Ernest Riveras say 'let's see what Pol [can do], he can close the circle', and I was there saying 'no, man, that is not going to happen'.

"And finally we did it."

The 27-year-old Spaniard, whose first MotoGP podium came in his 86th start, said the result was more emotional than his Moto2 title success in 2013.

"In Moto2, in 125[cc], I was winning and on the podium and constantly there, and humans, we are so stupid that we get used to all these good things when it happens," he explained.

"And then when I was world champion, I enjoyed it so much, it's amazing, but because you've been winning, it's emotional, but not as much as what we did today.

"What we did today was so difficult. And we've been trying so many times, and with this new bike, with the new KTM... it was so unreal.

"I think it was more emotional than winning a world championship, even just a third place, it's been amazing."