Quartararo registered his worst-ever MotoGP finish in last weekend's Aragon GP in 18th after a front tyre pressure issue dropped him down the order, meaning he fell to second in the standings and allowed Suzuki's Joan Mir to take a six-point lead.

When asked if he was the rider on the grid with the most to lose, Quartararo denied this, but is confident he still has "the potential" to remain in the title fight with four races to go.

"I have nothing to lose," he said.

"It's only our second year in MotoGP - if somebody would have told me today that I will be second in the championship with four races to go with a team that was born last year when we jumped from Moto2, I would have signed [for that].

"I have nothing to lose and I will try my best. That's it.

"If we have the potential to be up there, I will fight for it.

"It's a tough track for us, we know Portimao and Valencia will be great. 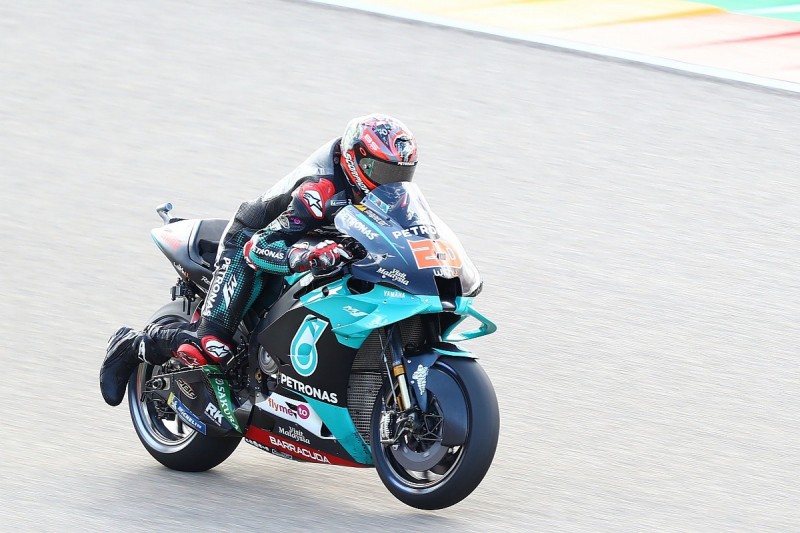 Quartararo was fourth overall after Friday's running at the Teruel GP at Aragon and just 0.382 seconds off the pace having started the day down in 17th in FP1.

The SRT rider says he tried "many things" set-up wise on his Yamaha, which yielded mixed results, but was able to make a step forward with tyre durability from last weekend.

He admits he was "a bit lost" over one lap, but says this is normal having worked exclusively on race pace.

"Today was really a day where I needed to try things on the bike because in the second grand prix [at the same track], if you do nothing you become further [off the pace]," he explained.

"In general, yes, I was happy about my second run in FP2 and that for us was quite great, because normally after 10 laps, 12 laps last weekend the drop of the tyre was way too big.

"But today it was still OK after 15 laps - which was the point we really struggled last weekend.

"For us it was a positive day and it was positive to keep going and keep working in this way, working on the pace because we know on one lap we are fast.

"Today I was a little bit lost because riding with the medium rear and then suddenly putting in the soft was a bit strange, but happy about FP2 in general."