Oliveira faces MotoGP shoulder surgery dilemma to be ready for 2020

Tech3 MotoGP rider Miguel Oliveira faces a dilemma over whether to have surgery on his shoulder or not, after it forced him to pull out of the Malaysian Grand Prix

Oliveira suffered some tendon damage in his shoulder when he was wiped out by Johann Zarco during the British Grand Prix at Silverstone in August (pictured below).

He aggravated the same shoulder in a 186mph crash during FP4 last weekend in Australia, which ultimately forced him into missing the race, and pulled out of action at Sepang after completing just four laps this morning in FP1.

At present, Oliveira is unsure if he will need to have the shoulder operated on, but admits a decision has to be taken soon as the required three-month recovery time makes it "borderline" that he will be fit in time for the first test of the 2020 season at Sepang in February.

"At the moment we just need to clarify with our medical team that we trust basically to understand what is the current condition [of the shoulder]," said Oliveira.

"Right now, if surgery is the correct treatment for what I have, we are speaking about three months of recovery, and now it's borderline to come back here to the tests fit.

"So, obviously it's no doubt that for the team and me the goal is to not compromise the beginning of next season. 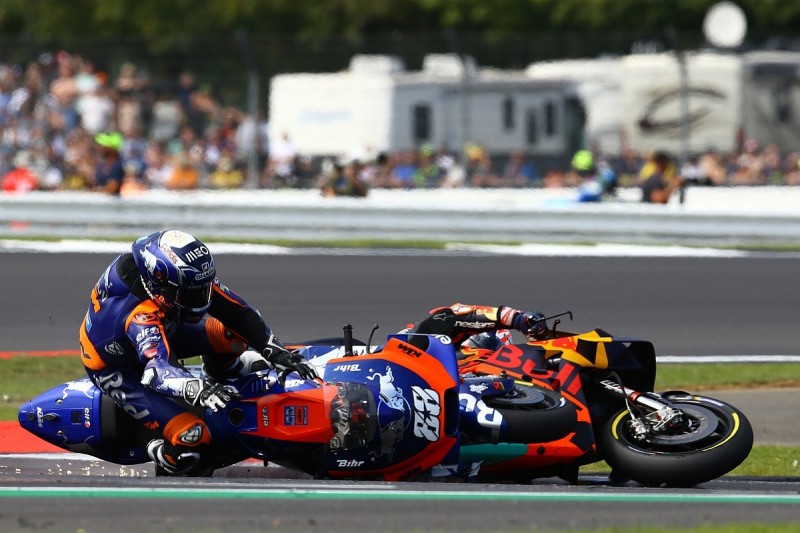 "We have a very competitive bike and we want to basically do the maximum that we can.

"I cannot speak before I go [to see] the doctor.

Hopefully it's nothing and I can continue to ride."

When pressed by Autosport if he has a deadline in mind to make a decision, he added: "Basically, we need to know as soon as possible.

"That's the goal. When you are speaking about something that takes a long time [to heal], sometimes two or three weeks can make a difference and that is the case."

The Tech3 rider admits since suffering the injury it's been "quite strange" to ride with, and hasn't experienced anything like it in his career.

"I've never had a kind of injury like this," he continued.

"I've broken bones and you are ready and you know how much time it takes [to recover], but actually a tendon I've never had this kind of injury, especially on the shoulder.

"So, for me, it was quite strange to ride after the crash and I've never ridden completely as I wanted.

"And so, obviously it makes you think what the correct solution is.

"But obviously we don't want to compromise the beginning of next year. So, we just need to see."