Although Marquez's first top-level Italian Grand Prix victory means the Honda man is still unbeaten in 2014, Lorenzo ensured that his countryman had to work much harder for the win that he has had to so far this year.

Lorenzo forced his way past early leader Andrea Iannone during the opening lap and then managed to make a brief break as Marquez worked on the Pramac Ducati.

Once past Iannone, Marquez chipped away at Lorenzo's advantage, but in contrast to so many races this year, there would be no swift change of lead.

It took until lap 17 of 23 for Marquez to make it past Lorenzo as the Yamaha clipped the grass on the pits straight while trying to defend the inside line, and even then Lorenzo was straight back at him.

That move begin an enthralling final part of the race, with Marquez repeatedly getting ahead down the straight, and Lorenzo either holding him out at the first corner or thrusting his Yamaha back ahead immediately afterwards.

Even when Marquez managed to get through the first few corners in front, Lorenzo managed to dive back through further around the lap.

As they began the last lap, Marquez once again made it in front down the outside past the pits, and this time he was able to cling on in front in the first sector. 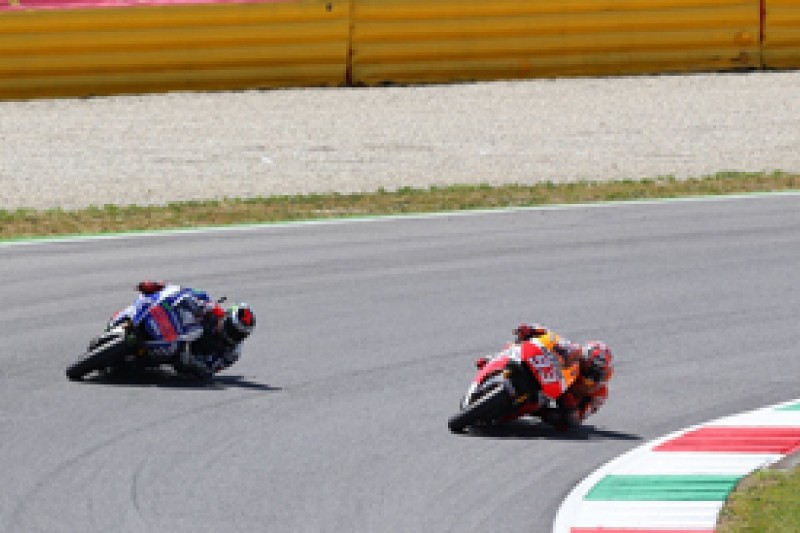 Lorenzo tried everything to repass him, including a bold look around the outside at the final corner, before falling short by just 0.121 seconds at the flag.

Valentino Rossi rapidly came through from his disappointing 10th on the grid to third, claiming a podium in his 300th grand prix start, but overshadowed by Marquez and Lorenzo.

Dani Pedrosa fought back to fourth after losing ground with a low-key early few laps.

He had to fight extremely hard to shake off the determined Iannone, who eventually slid down the order to take seventh behind Pol Espargaro and the factory Ducati of Andrea Dovizioso.

Bradley Smith crashed out on the third lap, with fellow Briton Cal Crutchlow doing likewise next time around.

Crutchlow's Ducati then slid down the track and wiped out the unlucky Stefan Bradl's LCR Honda, sending the German flying just hours after a vicious warm-up crash that had cast doubts over his race participation. Both riders walked away unhurt.