Under current regulations, factory teams below a certain success threshold get development and soft tyre dispensations. These are removed once certain results are achieved in dry races.

That has helped Ducati and Suzuki star in qualifying during 2015, with one or both of the dispensation teams getting a bike on the front at every grand prix so far.

Rossi has struggled in qualifying all year and is yet to achieve a front row start.

He has therefore had too much ground to make up in the races and has had to watch Lorenzo storm to four straight grand prix wins on days he could only reach second or third from further back on the grid.

"With this rule in qualifying, you have a lot of bikes that are fast for one lap and after that they are slower in the race," said Rossi.

"At the same time, Jorge has my bike and my tyres and is able to put all of those bikes between me and him.

In last Sunday's Catalunya GP at Barcelona, Rossi made it from eighth on the grid to second behind Lorenzo by the end of lap four but could not reduce the 1.4-second gap that existed by then.

But he still felt matching pace Lorenzo's pace for the rest of the distance proved he could fight with his team-mate if he could start closer. 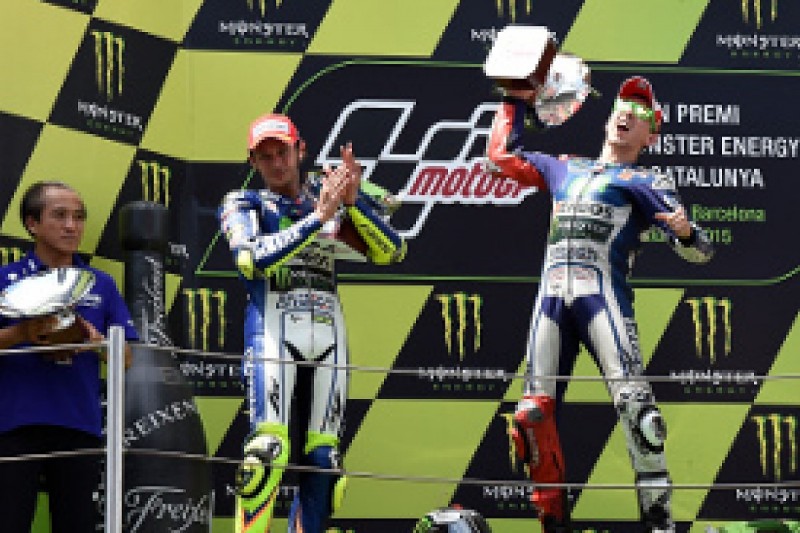 "This race gave us good confidence," said Rossi, whose championship lead over Lorenzo is down to one point.

"From one side, it is a shame.

"We had the potential to fight with Jorge for the victory until the last lap.

"From the other side, I'm happy because it was an important race coming out of three quite difficult races.

"From Saturday morning I was quite strong. Unfortunately, when you have Jorge in this type of shape, it is very difficult to win from the third row.

"In the race I did everything - I don't want to say perfectly - but I did very well, I didn't lose a lot of time.

"We have to concentrate in qualifying, try to start better - in the top five.

"Unfortunately it is not easy. It's a shame because I had the potential for a top five in qualifying but I did not ride well enough."