Despite heavy rain lashing down for the start of Moto3 FP2, conditions had cleared by the time the second 45-minute MotoGP session got underway at Buriram.

That earlier rain appeared to have had an impact on grip levels for FP2, as only five riders inside the top 10 on the combined order finding lap time gains from their FP1 best efforts.

It wouldn’t be until the final six minutes that Marc Marquez’s 1m30.523s from FP1 was finally deposed by the Pramac Ducati of Jorge Martin.

The Spaniard’s stint at the top of the timesheets was short-lived, as Bagnaia eased ahead with a 1m30.299s.

Crashes for the RNF duo of Darryn Binder and Cal Crutchlow within the space of a few minutes brought out yellow flags late on, which compromised several riders’ flying laps.

Zarco just about dodged the yellow flag disruption on his lap to produce the 1m30.281s that would see him end Friday fastest of all. 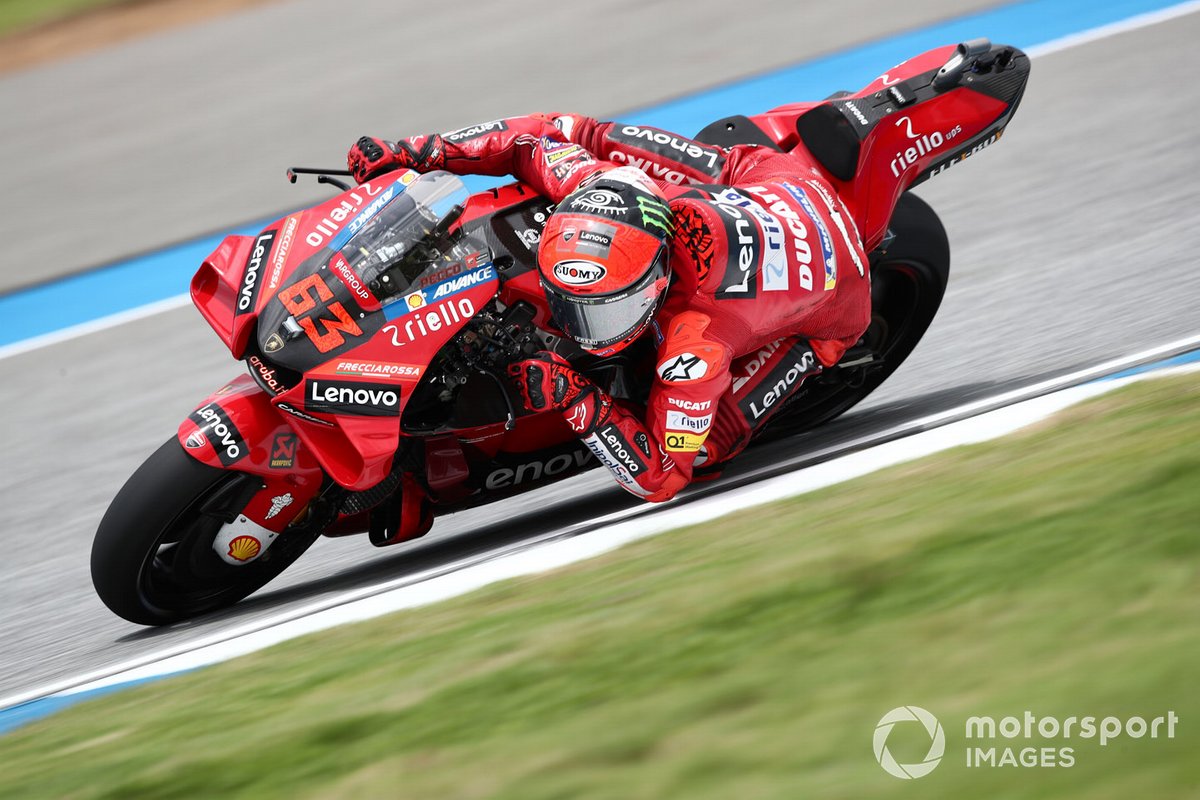 He only topped Bagnaia by just 0.018s, with Martin completing the top three ahead of VR46 Ducati’s Luca Marini.

Marini caught the ire of championship leader Fabio Quartararo at the start of the session on Friday afternoon.

The Yamaha rider ran wide on his first lap coming out of Turn 4 and was visibly frustrated at Marini for holding off passing him, with the Italian proceeding to shadow Quartararo for the next few tours before the pair swapped positions.

Marini headed Miguel Oliveira on the KTM at the end of FP2, with Marc Marquez sixth from Aprilia’s Aleix Espargaro – who remains 13th on the combined order and at risk of dropping into Q1 in qualifying should rain affect FP3 on Saturday morning.

Quartararo was eighth after his early dramas with Marini, while Enea Bastianini – who is also outside of the top 10 on the combined order – and the sister VR46 Ducati of Marco Bezzecchi, who crashed early on at Turn 3, completed the top 10 on the individual time sheet.

Maverick Vinales struggled with a lack of rear grip in 11th on his Aprilia ahead of the Suzuki of Alex Rins and KTM’s Brad Binder, while Motegi winner Jack Miller was down in 18th on his factory Ducati.

Darryn Binder was 19th after his spill, with Crutchlow – who also had a crash at Turn 3 – 21st on the sister RNF Yamaha.

Joan Mir’s Suzuki replacement Danilo Petrucci completed the 24-rider field in FP2, 2.6s off the pace as he continues to adapt to the GSX-RR.