Heavy rain delayed the race by almost an hour, but once underway Oliveira found the form he used to win the similarly rain-lashed Indonesian GP to beat Ducati’s Jack Miller for his second victory of the 2022 season.

But a scrappy start for Quartararo and a lack of pace in the conditions meant he took the chequered flag with no points in 17th, with third for Bagnaia putting him just two points behind the Frenchman.

And despite a long lap penalty for a collision, Aleix Espargaro getting across the line in 11th means he is just 20 points adrift with just 40 covering the top five now with three rounds to go.

Poleman Marco Bezzecchi converted a maiden MotoGP pole for himself and the VR46 squad to the holeshot – albeit by running off track having come close to contact with Pramac’s Jorge Martin.

Having been deemed to have gained an advantage by running wide and keeping the lead, Bezzecchi was ordered by race direction to drop a position a few laps later.

Seconds after Bezzecchi found himself powering through the outside of Turn 1, Quartararo got shoved onto the kerb having launched from fourth and lost all momentum going down the straight to Turn 3.

This dropped him to 11th, before he plummeted to 17th when he ran onto the green pain on the outside of Turn 4 and lost the rear-end of his Yamaha.

Behind Bezzecchi, the factory Ducati duo displayed no signs of team orders being issues as Jack Miller passed Francesco Bagnaia on the third lap for second.

Bezzecchi moved over to let Miller through at Turn 3 on the following tour, with the Italian sliding out of the points steadily come the chequered flag down to 16th.

Miller led by eight tenths come lap six when Oliveira worked his way up to second having started down in 11th.

Oliveira quickly bridged the gap to Miller and made an attempt at the lead into the last corner – but ran wide and allowed the Ducati rider to ease back through.

The pair ran line astern until the end of lap 14 when Oliveira made a final corner move stick to take the lead.

Behind, Bagnaia fended off a charge from the Honda of Marc Marquez, the Honda rider unsuccessfully trying last-corner pass on lap 20 of 25.

By this point, Pramac’s Johann Zarco was setting fastest lap after fastest lap and made light work of Marquez on lap 21 as he slightly nudged his way through at Turn 8 to take fourth.

Zarco carefully tried to navigate a move on Bagnaia for third, but couldn’t make anything happen before his tyres started to fade on the final laps.

At the front, Miller rallied briefly in the latter stages but Oliveira kept enough in hand to keep the Ducati rider at bay by 0.730 seconds as they took the chequered flag. 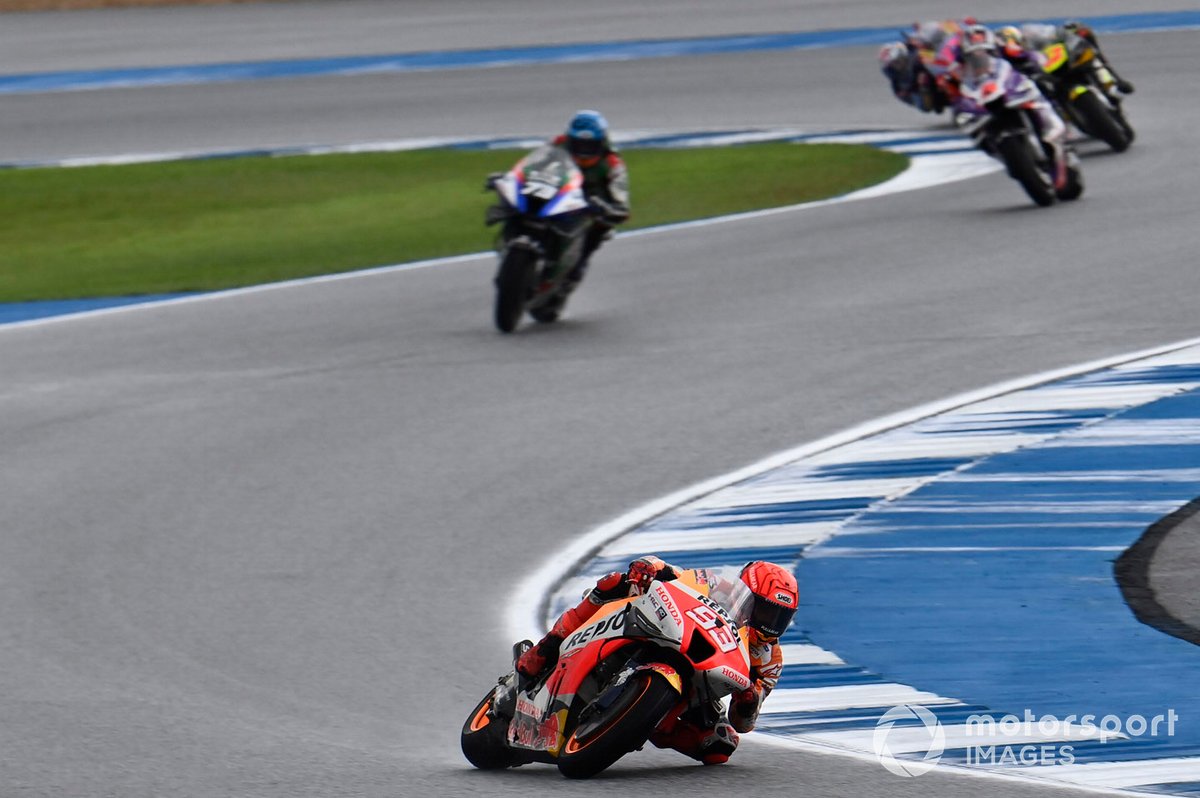 Bagnaia ended up completing the podium 0.522s clear of Zarco, with Marquez fifth as Gresini’s Enea Bastianini was 10.2s adrift in sixth.

Maverick Vinales made a late surge to seventh on the Aprilia ahead of LCR Honda’s Alex Marquez and Pramac’s Martin, with Brad Binder completing the top 10.

Binder was knocked off track by Aleix Espargaro at Turn 3 on the second lap, which netted the Aprilia rider a long lap penalty.

Serving that on lap 10, Espargaro dropped to 14th but managed to recover to 11th to close his championship deficit to Quartararo.

Quartararo’s woes carried on after that off-track moment on the first lap, with the Frenchman dropping to 19th at one stage.

He increased his pace somewhat in the latter part of the race, but comes away from Thailand without points as he trailed Bezzecchi in 17th.

Alex Rins on the Suzuki scored points in 12th, with the top 15 rounded out by Franco Morbidelli on the factory Yamaha, Honda’s Pol Espargaro and the Tech3 KTM of Raul Fernandez.

Fabio Di Giannantonio was 19th on the sister Gresini bike behind Quartararo, with Cal Crutchlow 19th on the RNF Yamaha ahead of Suzuki stand-in Danilo Petrucci, RNF’s Darryn Binder, LCR stand-in Tetsuta Nagashima and Luca Marini – who crashed his VR46 Ducati while running fifth early on – the last of the classified runners.

Tech3’s Remy Gardner was the only other faller in the race, but the Australian was unable to re-join after his crash.