MotoGP stewards are to impose harsher penalties for dangerous riding from now on, following the incident-strewn Argentiian Grand Prix

Tougher measures were agreed to during Friday evening's Safety Commission meeting at Austin, which was attended by the majority of the field following the controversy surrounding Marc Marquez's aggressive riding at Termas de Rio Hondo.

The world champion, recovering from an earlier ride-through penalty, was ordered to drop a place after making contact with Aleix Espargaro and was then given a 30-second time penalty for a clash with Valentino Rossi that caused the Italian to crash.

Espargaro was also hit by Danilo Petrucci in Argentina, sparking a bitter war of words with the Pramac team on social media, while Dani Pedrosa was thrown from his bike and injured after being forced out wide by Johann Zarco on the opening lap of the race. 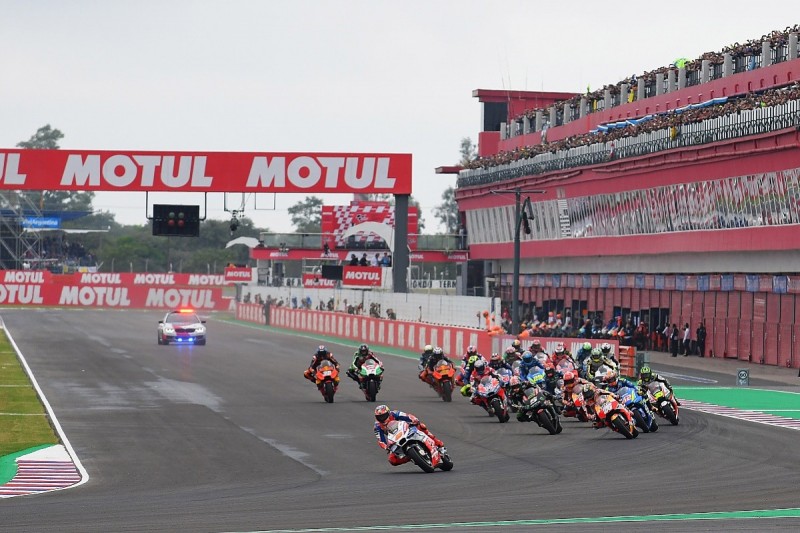 Jorge Lorenzo in particular argued that such actions were the fault of stewards for not doing enough to deter bad behaviour, and now consensus has been reached to punish dangerous riding more severely.

"We have agreed that from now on more severe sanctions will be imposed," said Suzuki rider Alex Rins.

KTM rider Pol Espargaro added: "The sanctions will be toughened up more. Each of us gave our opinion and Dorna listened to us.

"They have repeated to us that from now on things will be done in a more precise way and that tougher measures will be imposed. The harder the sanctions, the less sanctions there will be."

Espargaro said Dorna CEO Carmelo Ezpeleta made it clear to the riders in the Safety Commission that the FIM stewards, who are responsible for deciding punishments, are ready to clamp down.

"Carmelo has told us that the stewards are already informed and that they will be tougher," added Espargaro.

"But imposing the sanctions remains the work of the stewards and the FIM. Dorna doesn't want to take sides and wants to stay neutral."