Dovizioso had been a competitive seventh in the rain-hit wet Friday afternoon session and had secured an automatic spot in the pole shootout in practice three in the dry.

But he had a low-key showing in the final qualifying segment itself, finishing 1.401 seconds adrift of poleman Marc Marquez and behind the two other Ducati Desmosedici GP17 riders in the session - Pramac's Danilo Petrucci and works team-mate Jorge Lorenzo.

"Today it was very bad, I'm not happy about our position and lap time," said Dovizioso, who has taken two of his four MotoGP wins so far in wet races.

"Yesterday [in practice two] I did 24 laps with the same tyre and I did the lap time in the end and I didn't have any problem with the drop on the rear tyre.

"And today in four laps - and I decided to not push in the first four laps, especially on the rear - I finished the tyre, and I didn't have any more grip on the rear.

"Also the electronics didn't work in the right way because I finished the tyre.

"At the end I tried to push but I was so slow and the tyre was finished. I didn't expect it and that's why we are 10th." 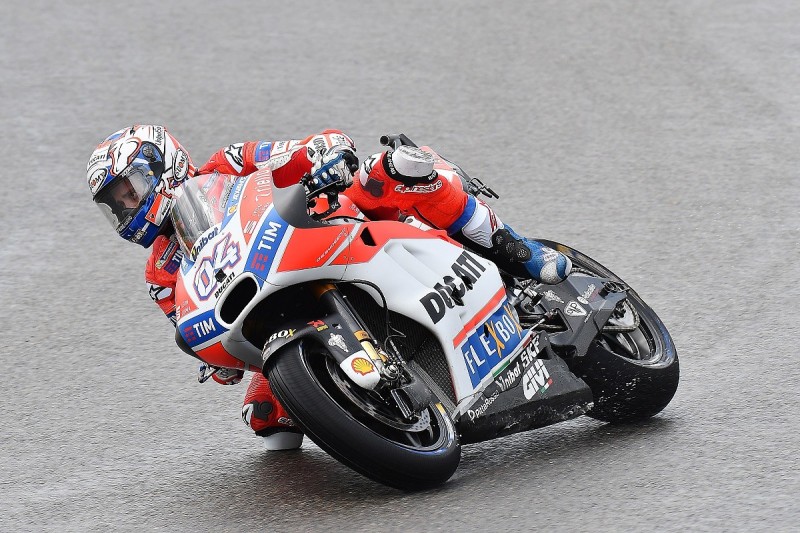 Dovizioso reckons he is "for sure stronger than 10th" on race pace and admits he takes some solace in being surrounded by his championship rivals on the grid - with Yamaha duo Valentino Rossi and Maverick Vinales qualifying either side of him.

"We are not the fastest so it was very important to start in the first row or second," Dovizioso said. "So I'm not happy about [the result].

"Fortunately, Valentino and Maverick are there with me."

Team-mate Lorenzo, who endured a miserable time at a wet Sachsenring with Yamaha last year, saw his sixth place on the grid as a positive outcome.

Lorenzo has never won a grand prix race at the German venue and freely admits it is "not my favourite track", but suggested he was feeling stronger in wet conditions than in the dry this weekend.

"The Ducati has a good feeling with the [wet] tyres and I can push quite a bit, slightly more with less quantity of water than with more water," he said.

"Also with a bit more water I don't think I'm so bad like last year, for example.

"This track in general, also with the Yamaha, I struggled - I've never won here. To be competitive with the Ducati, it's even worse.

"In the wet I'm quite competitive. In the dry, I try many things and finally we are getting there but still not seriously fast.

"So we already know this track for me is quite difficult and we need to take the maximum from here and see what happens in the next track, which should be much better."