MotoGP championship leader Marc Marquez believes he is still "missing something" with his Honda bike, despite having scored comfortable back-to-back wins in Austin and Jerez

On the back of a dominant win from pole at COTA, Marquez charged through from fifth to record his second premier-class Spanish GP win, establishing a 12-point buffer in the standings over nearest rival Johann Zarco.

But having crashed in FP2, FP4 and Sunday warm-up, Marquez says he will use Monday's MotoGP test at Jerez to work on the front end of his Honda.

"Like we see this weekend, I struggle a little bit," Marquez admitted. "I was so comfortable but we are missing something in the front, and I want to try something tomorrow, because I crash three times.

"Still I'm missing something and I want to understand well."

Marquez said the Spanish GP was "not a race about speed", but a race where being "precise" and making "the correct decision in every lap" proved key.

"I was clever in the beginning to overtake the riders, because [it] was so difficult, and then I realised that was nearly impossible to overtake [Jorge] Lorenzo," Marquez said.

"He was braking so late, exiting so well from the corners, but then I was a little bit passionate, and then when I saw his tyres start to drop, I say 'okay, now it's time to lead the race and open a gap'." 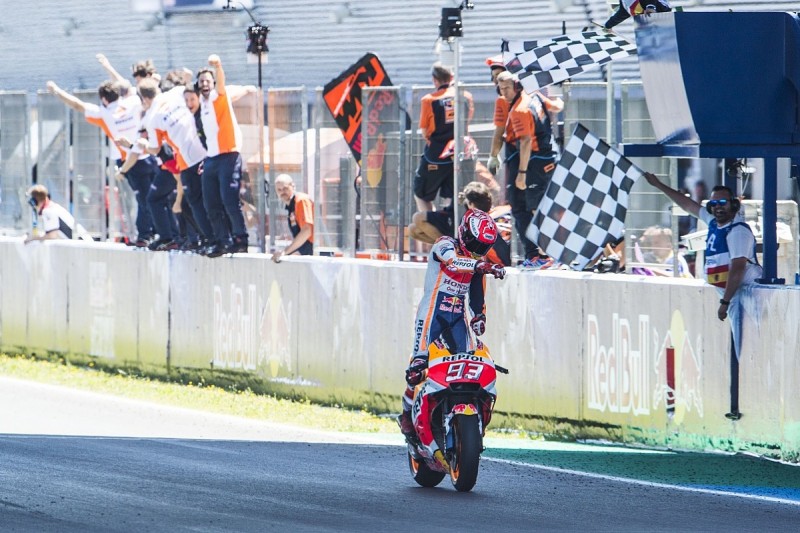 He gave credit to Lorenzo for holding off his Honda works team-mate Dani Pedrosa, a three-time Spanish GP winner who Marquez felt was his "main worry" for the race.

Having passed Lorenzo for the lead, Marquez managed to break away, but not before catching a big slide at the Turn 12 right-hander - where gravel had been chucked onto the racing line by the crashing Marc VDS Honda of Tom Luthi.

"And then both wheels slide, but I was able to stay on the bike."