Going without a win since last year’s wet French GP, Miller grabbed the lead on lap three and streaked away to his first victory of the season.

It was a nightmare race for the three main championship contenders, as Fabio Quartararo and Bagnaia struggled for form while Aleix Espargaro was forced to change to his second Aprilia on the warm-up lap due to a mechanical issue.

A crash trying to pass Quartararo on the last lap led to a fifth DNF of the season for Bagnaia, gifting Quartararo an 18-point lead in the standings heading to next week’s Thailand GP.

Such was the limited amount of dry time the grid had this weekend at Motegi, numerous tyre changes took place ahead of lights out.

Poleman Marc Marquez went to the grid on a hard rear tyre, but switched to a soft for the start.

But he couldn’t use the early grip advantage that would have offered him to any effect. Though Marquez did convert his first pole in three years to the holeshot, he was muscled out by KTM’s Brad Binder at Turn 1. 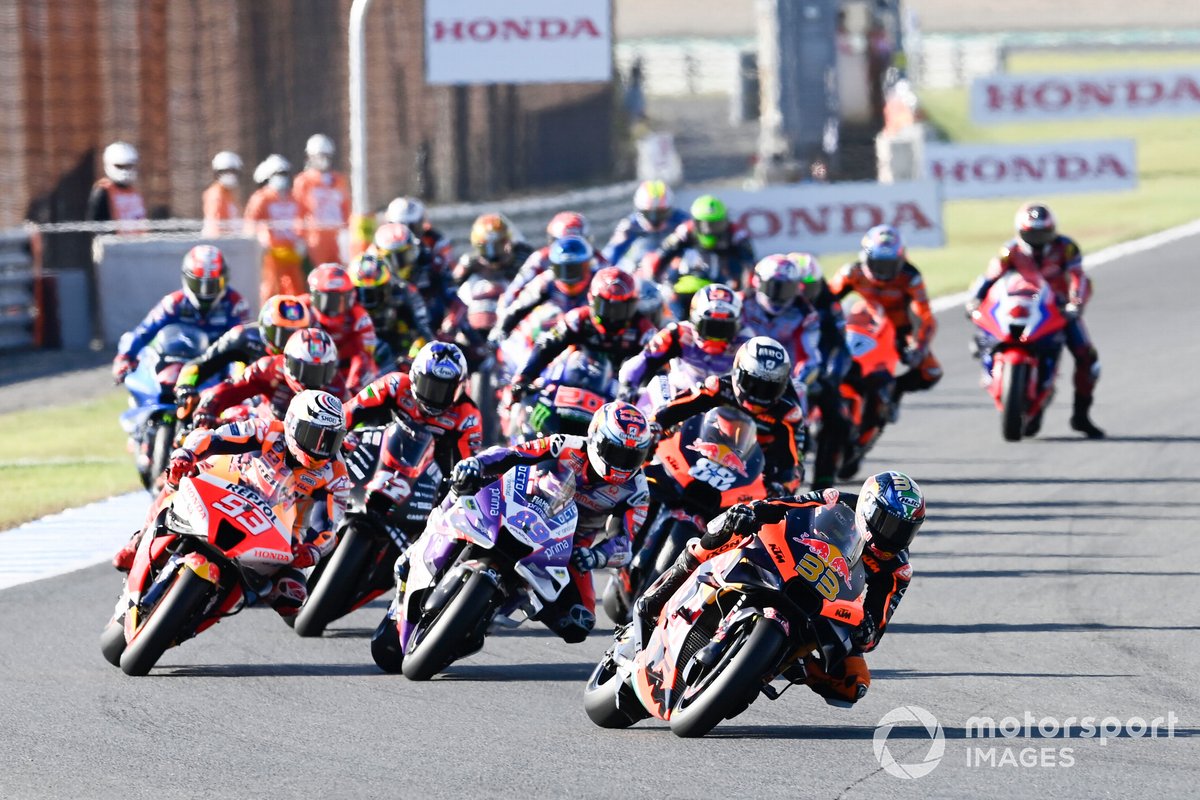 Pramac Ducati rider Jorge Martin jumped up to second, before overtaking Binder for the lead into Turn 7 as Marquez was shuffled back to fifth.

Behind, the title challengers were all experiencing their struggles.

Drama struck at the end of the warm-up lap when Aprilia’s Aleix Espargaro pulled into pitlane for his second bike, dropping his broken first RS-GP as he made the switch.

Espargaro emerged from pitlane at the back of the pack behind the safety car, while Quartararo and Bagnaia failed to make up ground on the opening lap from their starting spots of ninth and 12th.

Miller’s charge from seventh on the grid saw him into the podium places began on the opening lap, with the factory Ducati rider passing Binder on the brakes into Turn 11 on the second tour.

The Australian, running the hard rear tyre, tried the same manoeuvre on Martin next time around.

Miller ran wide on the exit of Turn 11, allowing Martin to draw back alongside into the next left-hander at Turn 12 – though Miller held firm to end the third lap in the lead. 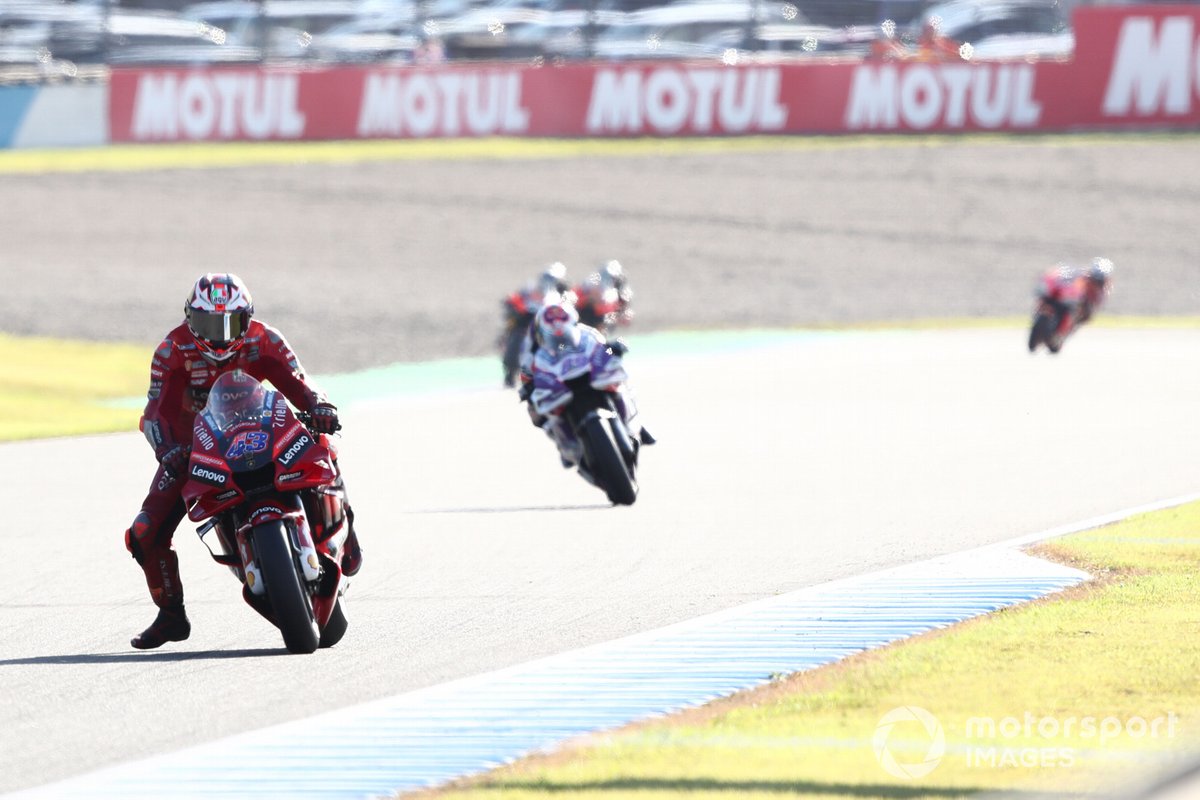 The factory Ducati rider repeatedly reeled off race-best laps as he quickly opened his lead out to over a second come lap nine of 24.

Martin would make an error a lap later which would give Miller a lead of over three seconds, which he would continue to extend out to over five seconds in the latter stages.

As drama struck behind him on the last lap for his Ducati team-mate, Miller eased off to take the chequered flag 3.4s clear of the field.

Second went to Binder after the KTM rider overtook Martin on the final lap, marking his first podium since the opening night of the season in Qatar back at the start of March.

Poleman Marquez completed his first race since May’s Italian GP in fourth after snatching the position from the sister KTM of Miguel Oliveira with a hard move on the inside of Turn 8 three laps from the end.

VR46 Ducati rider Luca Marini continued his 100% finishing record in his MotoGP career with a strong ride to sixth ahead of the Aprilia of Maverick Vinales.

Vinales came under pressure late on from former Yamaha team-mate Quartararo, but the Frenchman’s attentions were taken by a charge from nearest title rival Bagnaia in the closing stages. 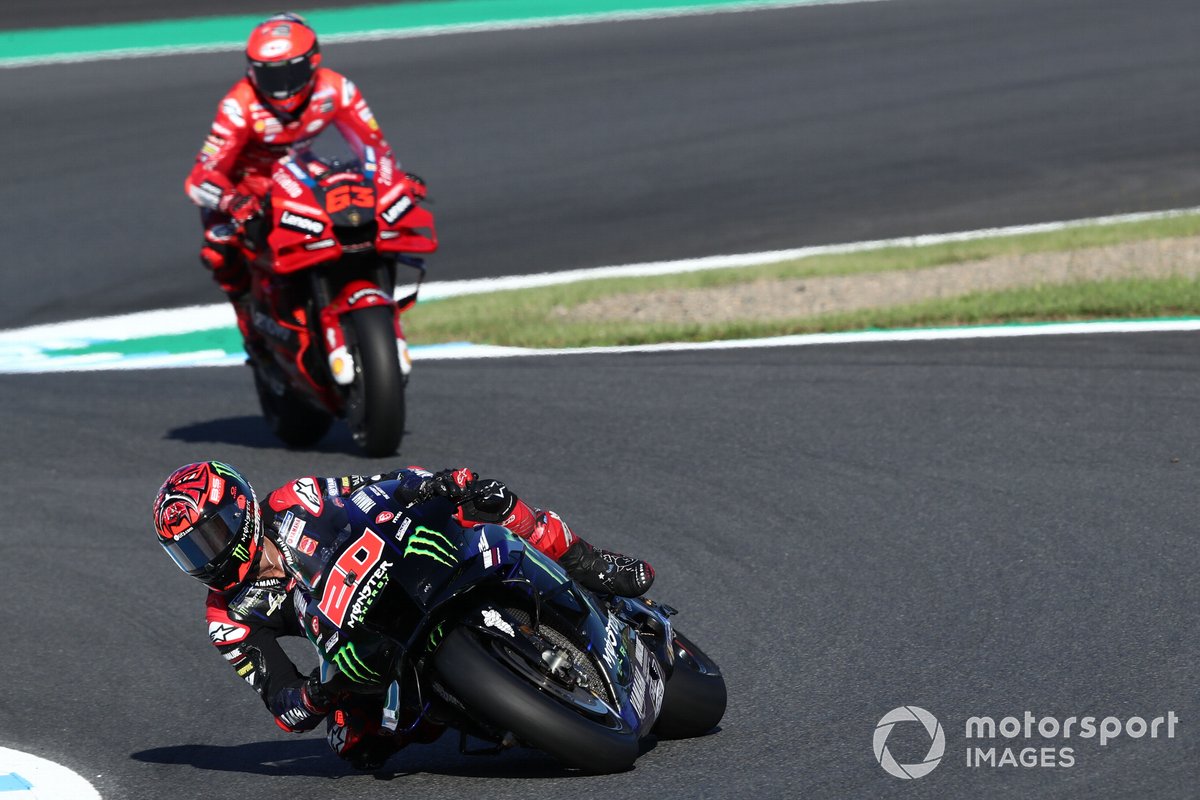 Bagnaia engaged in an early duel with Gresini Ducati’s Enea Bastianini as the Aragon winner recovered from 15th on the grid, but would retake ninth from his future team-mate with a brave pass into the final two corners on lap 20.

The factory Ducati rider hunted down Quartararo, but when he went for a pass up the inside of the Yamaha into Turn 3 Bagnaia tucked the front of his GP22 and crashed out – narrowly avoiding taking the championship leader with him.

Tallying up his fifth DNF of 2022, Bagnaia allowed Quartararo to get to the chequered flag in a damage-limiting eighth to slip from 10 points behind in the standings after Aragon to 18 with just four rounds remaining.

Bastianini was ninth, his title hopes remaining remote as he sits 49 points behind Quartararo.

Aleix Espargaro couldn’t salvage any points in the end, the Spaniard 16th to go to Thailand 25 points behind Quartararo in the standings.

VR46’s Marco Bezzecchi rounded out the top 10, with Pramac’s Johann Zarco fading from second on the grid to 11th at the chequered flag ahead of Honda’s Pol Espargaro, LCR’s Alex Marquez, Yamaha’s Franco Morbidelli and RNF Racing’s Cal Crutchlow. 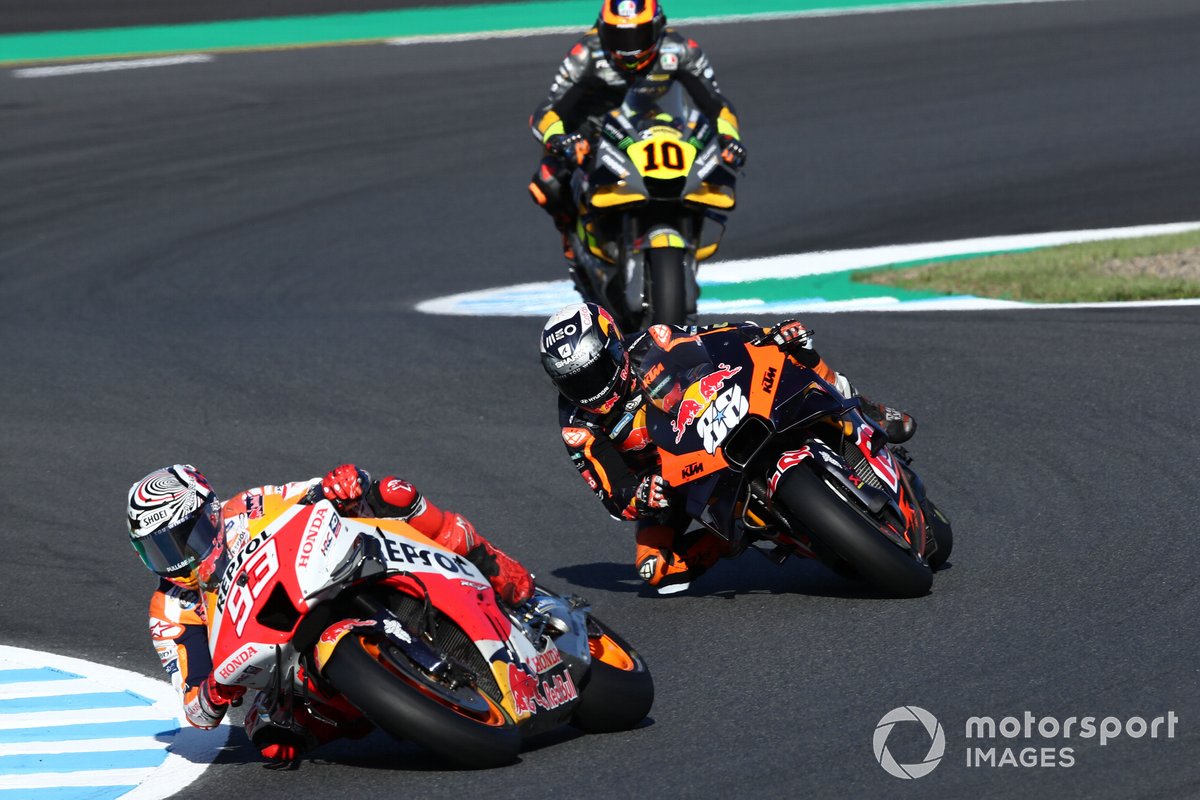 His stand-in team-mate Takuya Tsuda – who is replacing the injured Joan Mir – exited the Motegi race in spectacular fashion after his GSX-RR burst into flames on lap 12.

Tsuda left the bike ablaze against the barrier on the outside of Turn 5, escaping unscathed as the marshals quickly dealt with the fire.