Miguel Oliveira stormed to victory in a shortened and rain-delayed MotoGP Indonesian Grand Prix from reigning world champion Fabio Quartararo as Marc Marquez was ruled out with a concussion.

Drama permeated the run-up to MotoGP’s first Indonesian GP in 25 years, with the big news being Marc Marquez’s violent warm-up crash ruling him out of the race.

The Honda rider suffered a concussion in a horrifying highside in the latter stages of warm-up on Sunday morning and was declared unfit having gone to hospital for precautionary checks.

The MotoGP race was then shortened from 27 laps to 20 over safety fears about the condition of the circuit in the extreme heat, before heavy rain led to a delay of an hour and 15 minutes to proceedings.

Poleman Fabio Quartararo nailed his launch off the line to grab the holeshot on his factory Yamaha, with Oliveira slotting into second ahead of Ducati’s Jack Miller and a fast-starting Alex Rins on the Suzuki.

Oliveira overhauled Quartararo on the run over the line to start lap two as the Yamaha rider seemingly made a mistake exiting the final corner – something he’d do on the following tour, which dropped him out of the podium places to fifth.

Miller also quickly dispatched Quartararo to give Oliveira chase, as the leading duo immediately moved over a second clear of the pack behind.

The KTM rider’s searing pace would prove too much for Miller and would succumb to his advances at Turn 12 on lap five.

Oliveira would charge off into the distance, opening up a lead of over four seconds to Miller, who started to fade in the closing stages. 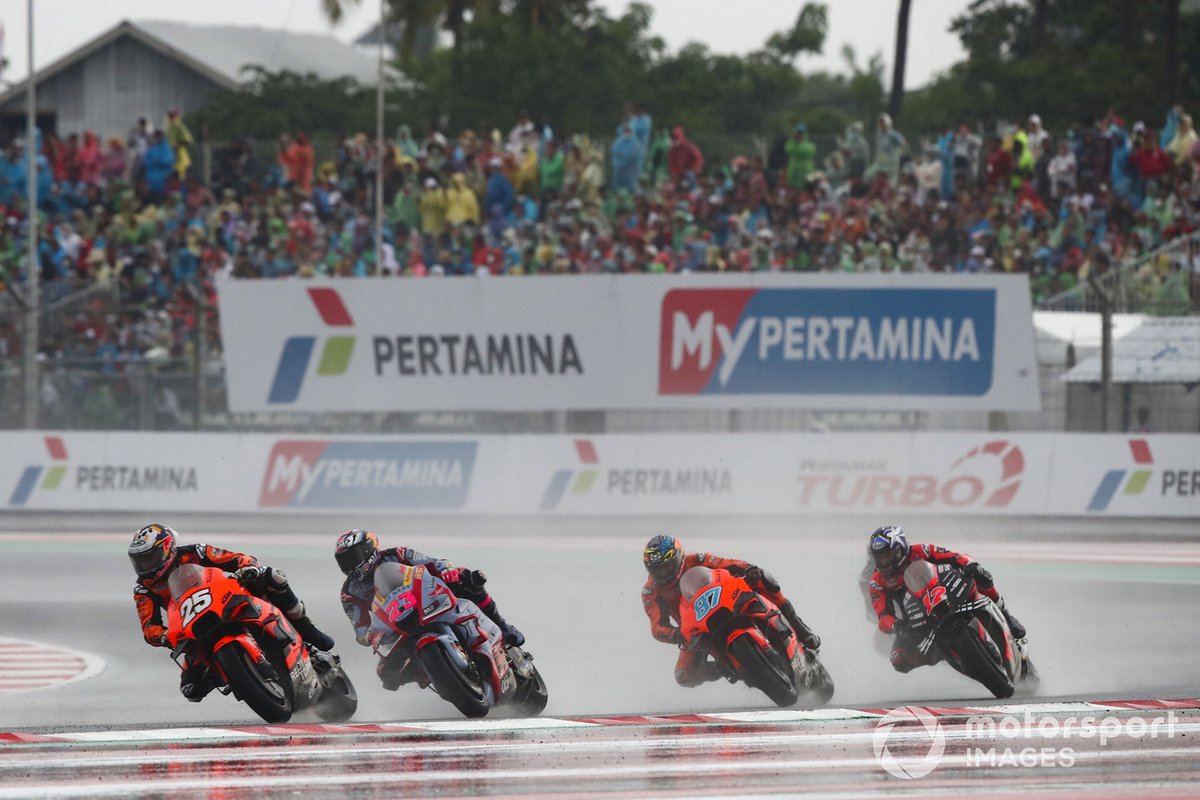 Miller came under attack from Pramac’s Johann Zarco, Rins and Quartararo – though a mistake for Rins would drop him off the podium battle.

Quartararo capitalised on a battling Zarco and Miller to get ahead of the Pramac rider at Turn 1 on lap 16.

At Turn 12 Quartararo moved ahead of Miller to take over second, with the Yamaha rider knocking Oliveira’s lead down to 2.8s seconds as they raced onto the final lap.

But Oliveira kept his lead above two seconds to claim his fourth win in MotoGP as Quartararo took his best-ever wet weather result in the premier class in second.

Pramac’s Zarco completed the podium ahead of factory team counterpart Miller, with Rins head Suzuki team-mate Joan Mir – who rose from 17th on the grid to salvage his difficult Indonesia weekend.

Franco Morbidelli was seventh on the second of the factory Yamahas as Brad Binder prevailed in a wild battle for eighth on his KTM.
Binder beat Aprilia’s Aleix Espargaro and his RNF Racing Yamaha-mounted brother Darryn Binder, while Enea Bastianini holds onto a slender two-point championship lead after a difficult race in 11th for the Gresini rider.

Pol Espargaro could only manage 12th on the sole-remaining Repsol Honda, with Alex Marquez (LCR Honda), VR46 Ducati rider Luca Marini and Ducati’s Francesco Bagnaia – who was lucky to stay mounted after nearly crashing at Turn 1 early on – rounding out the points paying positions to 15th.

Jorge Martin crashed out at Turn 1 on lap eight when he hit some standing water, while RNF’s Andrea Dovizioso was forced out with a mechanical problem.