Pramac Ducati rider Danilo Petrucci led a delayed opening practice session for MotoGP's Assen round, although he ended the morning with an apparent engine failure

The session was stopped after just four minutes of running when Andrea Dovizioso's factory Ducati suffered a problem and laid oil on the track.

Dovizioso's team-mate Jorge Lorenzo and Tech3 Yamaha rider Jonas Folger both crashed on their outlaps, with the latter requiring a brief trip to the medical centre but passed fit to continue.

Times dropped rapidly when the session resumed after a delay of some 30 minutes, with the other Tech3 rider Johann Zarco moving to the top of the times at the halfway point on a 1m35.504s.

That was beaten shortly after by Maverick Vinales on the works Yamaha, the Spaniard posting a 1m35.263s, which remained the benchmark until the final five minutes as Folger improved to a 1m35.052s.

Cal Crutchlow was first to dip below the 1m35s barrier on the LCR Honda, taking over the top spot briefly before Zarco retook the place with a 1m34.806s.

The Frenchman was only bettered by Petrucci, who lapped the TT circuit in 1m34.680s to end the session fastest by 0.126s, although his GP17 Ducati appeared to suffer an engine failure shortly afterwards. 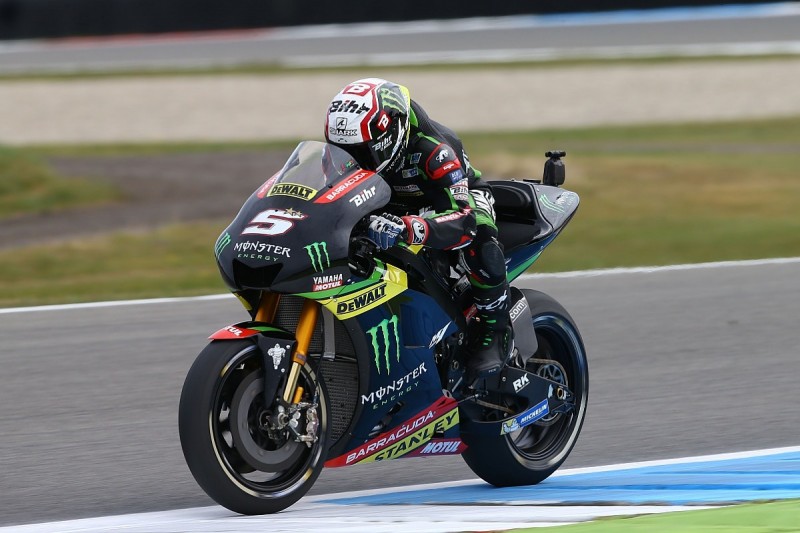 Behind Zarco, Crutchlow made one more improvement to end up third, just 0.007s clear of Dovizioso in fourth.

Valentino Rossi's final lap was enough to promote him to P5, 0.161s off the pace, after the Italian had spent much of the session outside the top 10.

Andrea Iannone was sixth fastest for Suzuki, ahead of Dani Pedrosa on the best of the works Hondas, Folger, Lorenzo's factory Ducati and Karel Abraham's Aspar Ducati.

Vinales didn't improve his time in the final 15 minutes and therefore slipped to 12th, 0.583s off the pace, one place ahead of Marc Marquez on the second Honda.

On his return to competitive MotoGP action Suzuki rider Alex Rins was 18th fastest, 1.197s off the pace, while Bradley Smith - who sat out the last round at Barcelona with a hand injury - propped up the timesheets in 23rd on his KTM.

Following the delay to FP1, the second session will take place 10 minutes later than originally scheduled at 2.15pm local time.