Joan Mir says his crash in MotoGP Valencia Grand Prix FP2 was because conditions were "on the limit" for the hard front tyre, but he was forced into trying it

The championship leader ended Friday's running at the Ricardo Tormo Circuit 12th overall, having finished FP2 in 11th on his Suzuki.

His afternoon was interrupted by a fast crash at Turn 4 in the latter stages of FP2, which forced him into running his second bike for his time attack to try and bag a provisional Q2 place.

However, he "didn't have the same feeling" on his second GSX-RR, which stopped him from improving his lap time on soft rubber.

Mir also admits the forecasted cooler conditions for Saturday meant he had to test the hard front tyre on Friday, ultimately leading to his crash.

"Overall, it was a good day, talking about many feelings [on the bike]," he said.

"I had the crash in FP2 while trying the hard front, for this temperature it was a bit on the limit and I crashed.

"The problem was that I didn't have the same feeling with the second bike. It was not completely ready.

"But anyway, I think I have margin to improve. We know what is the way, so let's see tomorrow." 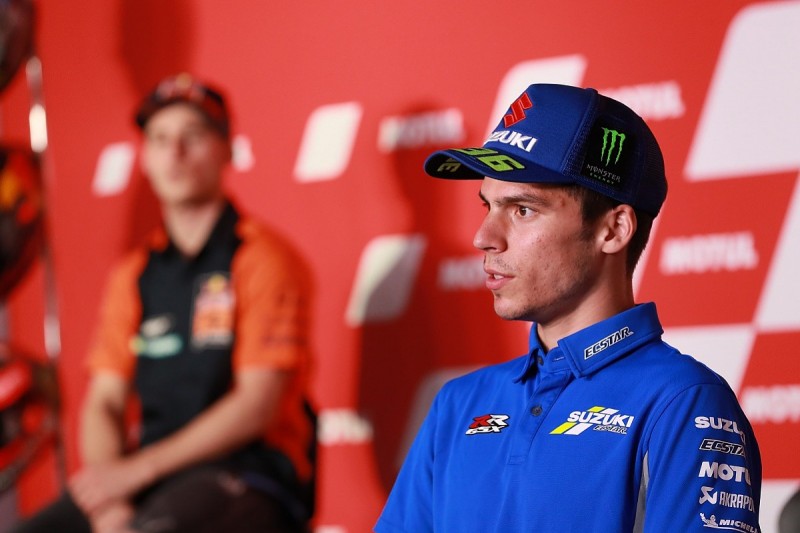 He added: "For sure, I know we are not the fastest. It's only Friday so I think I have potential to improve tomorrow because today we wanted to try the hard front and probably... in the normal conditions, I didn't want to try in this temperature but it looks like it will be cooler tomorrow so we had to try.

"This was a bit of a problem to improve a bit more the lap time, we had to try.

"Tomorrow we have time in FP4 and also FP3 to improve our pace that is not bad, but we have margin."

Team-mate Alex Rins, who trails Mir by 37 points in the standings, was ninth overall on Friday and currently the only one of the top three in the championship holding a provisional Q2 place.

Despite the tension of the championship potentially being decided this weekend, Rins admits there are "no bad vibes" within the Suzuki box.

"It is a very pleasant environment, of course, there are no bad vibes and there could be when there are two riders playing for the world championship," he said.

"There could be tension, however there is none, everything has been managed quite well.

"It's all, in the end, the good vibes in the team, it comes from the atmosphere that has been created year after year with the mechanics who have been there from the beginning."