Jack Miller says he will be raising his concerns about the dangers of the wall at Stowe in the MotoGP British Grand Prix safety commission meeting after crashing in FP2.

The Ducati rider came off at Turn 7, sliding across the gravel runoff area before making contact with the outside wall.

Though the Australian came away uninjured, albeit feeling “pretty tender,” he believes the “pretty tight” corner needs to be looked at and airbags considered as an extra measure.

Miller also said it could have been a “different story” had his GP22 followed him into the wall instead of coming to a stop on the gravel.

He said: “It’s close, I’ll be complaining or at least bringing it up in safety commission.

“I know myself personally, I went into the gravel backwards, sliding backwards.

“I lost all sense of direction of where I was because I started tumbling and had no references whatsoever, so I couldn’t tell whether I was in the air or on the ground or whatever, then I went head first into the ground, bent my wrists back and then as I flipped over I hit the wall and then bounced back off the wall.

“So I made it to the wall and the bike was right next to me.

“I crashed kinda earlyish on the brakes, I saw for example Binder go down and he didn’t quite make it to the wall, but then Zarco did. Some of the other guys did.

“It’s kind of one of those ones, and especially if there’s contact or whatever, it’s something that needs to be looked at I think in the future, because it is pretty scary.

“I had a bit of a moment there this morning and even just trying to stop the bike going into the gravel, even though you’ve got that runoff area afterwards, it’s pretty tight.” 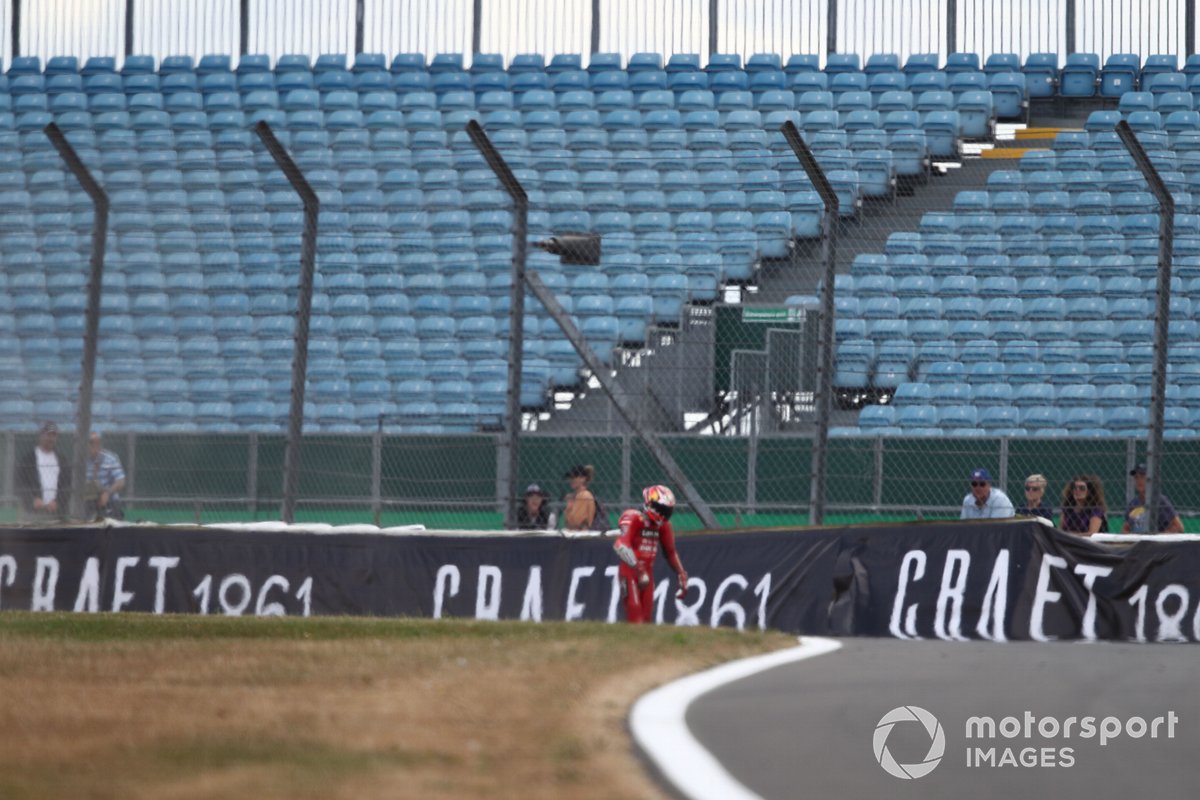 Miller recalled Tech3 rider Jonas Folger’s huge crash at the corner in 2017 and said looking at that incident made him think it was “rather close.”

He said that though he was not usually concerned about the corner, it was “only when you have a moment or you do crash, like I said I had no reference whatsoever, one minute I was on the track the next I was hitting the wall.

“I was lucky, like I said the bike was here, I was here, but if the bike followed me in it’s going to be a different story.

“There’s no airbag on it where I hit, so whether or not airbags need to be put round a bit further, we’ll discuss it this afternoon and try and come up with a solution.

Miller said there was a “big crosswind” at Stowe as the air “funnels around” the grandstands there, adding: “As riders, the track goes up and drops off where everybody’s crashed and yeah, I came in there too fast.

“I was trying to stop it, wasn’t happening, and I fired it at the wall. Not ideal, pretty tender, but was able to come back in, swap leathers, get back out on the soft and post a decent time.

“I can’t complain too much, we’re inside the top 10, so job one done for the weekend so now we’ve just got to keep going into tomorrow.

“Understand what happened from the crash, I know clearly that I pushed too much but it felt like I could push that much, so just trying to get the bike to give me that ability to be able to brake there, especially to make a pass or whatever.”