Ducati’s Jack Miller thought his MotoGP FP2 pacesetting lap would be scrapped when LCR’s Takaaki Nakagami crashed in front of him.

Miller monstered the field in second practice for the Doha Grand Prix on Friday when he posted a 1m53.145s lap in the closing stages.

However, he did so having been following Nakagami when the Japanese rider fell from his Honda at Turn 7.

MotoGP rules stipulate a rider’s lap will be automatically cancelled if they set it passing through a yellow flag zone, though Nakagami’s crash was still happening as Miller rode past, meaning no caution had been thrown.

“I checked the sector coming out of T6, and as soon as I came out of six and looked at the sector [time], when I looked up I saw the dust,” Miller said.

“He [Nakagami] was still rolling at that point.

“I thought the lap would be cancelled, I was directly on him and had no chance to slow down.

“I pushed [for] another lap anyway, I did another one that was enough to keep me in the Q2.

“I just wasn’t sure. I’ve been excluded like that before, so I didn’t want that to happen again.” 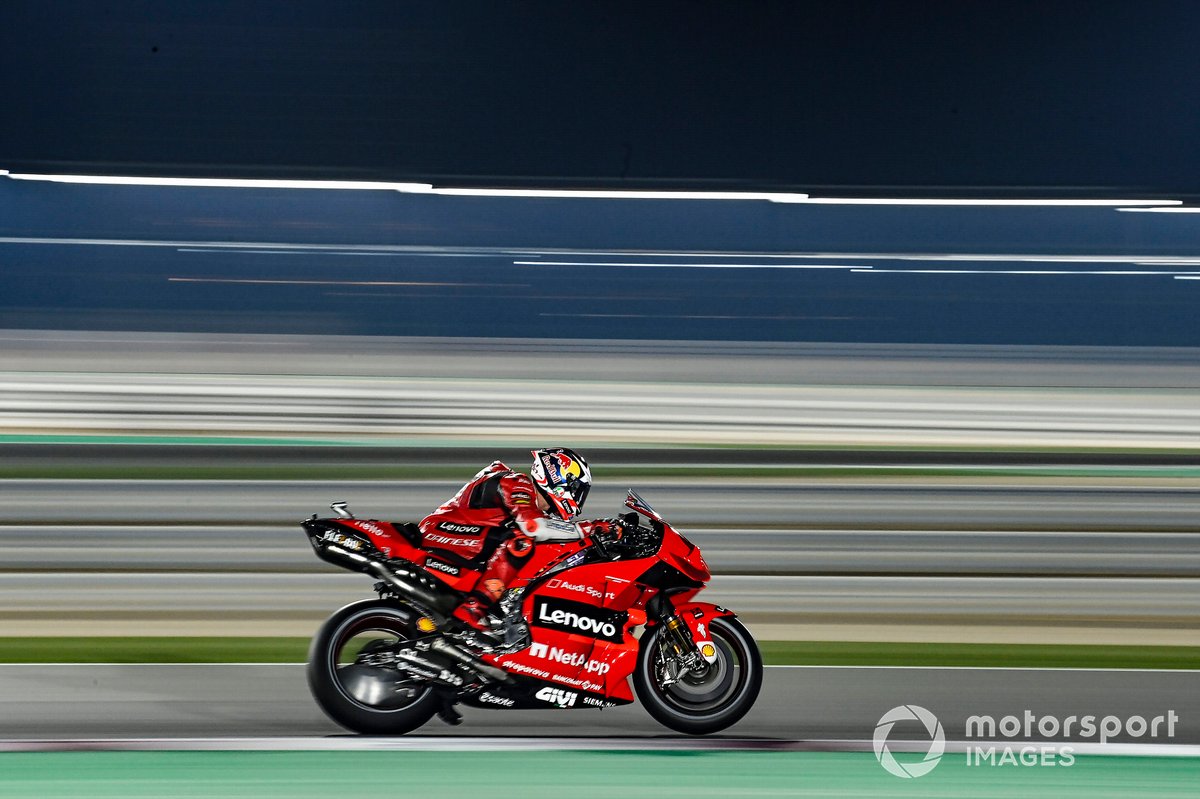 Miller’s time attack attempt before that lap, which was set to put him top of the session, almost ended in disaster at Turn 14 when his Ducati almost flicked him into the scenery.

Explaining the moment, he said: “I’m fine from the moment, I have nothing really to [say]. It is one of those things when you’re pushing.

“Better a moment than a crash. Everybody keeps asking if I hit myself, but I didn’t.

“The family jewels are safe and sound.

“From what we’ve gathered of the data, it shouldn’t happen anyway.

“It has not much to do with us. It’s one of those things that was unavoidable, but I think it won’t happen again.”

Miller led a trio of Ducatis at the end of Friday, with Pramac rookie Jorge Martin denied making it a Desmosedici quartet by 0.010s in fifth.

With FP3 conditions unlikely to allow for lap time improvements on Saturday, Martin has secured himself a place in Q2 in just his second race weekend – something he admits he didn’t expect.

“When they tell me if I expected it, I didn't know what to expect,” Martin said. “I only got on the bike a few weeks ago, but it's clear to me that if I want to improve I'm in the right place.

“My goal was to finish in the top 10 to get into Q2, but I definitely didn't expect a FP2 like today.

“I expected the bike to be more difficult, but it allows me [to do] a lot, I can push it and take advantage of the strong points and hide the weak points.”