Honda became the fourth manufacturer to try a fairing designed to compensate for the removal of now-banned winglets on Friday's opening day in Qatar, with a solution similar to Suzuki's.

However Marquez crashed at the final corner on his first run with it fitted to the RC213V, and the Spaniard said the fairing influenced the crash, although he conceded he also braked too late.

"And then also, like I say the wings changed a little bit the set-up, and when I was riding I didn't feel it.

"But then when I stopped and we checked on the data and it changed quite a lot the set-up on the [corner] entry.

"And, yeah, it was bottoming [out] and for that reason I lost the front."

The focus of the winglet substitutes remains helping keep the front wheel planted to improve acceleration, which is of even greater importance for Honda.

Despite Marquez winning the championship last year, and the brand claiming nine of the 18 races, Honda struggled with acceleration throughout the campaign.

That has led to an overhaul of its engine, with another update then introduced after the winter break.

"We are still missing something but I think this year a little bit less," he said.

"This year [acceleration] is still our weak point but we are working well and I think every time it is better and better.

"Tomorrow we need to also try something on our acceleration, on the electronics side, and I hope that helps a little bit .

"But still, we know it will not be our strong point this season." 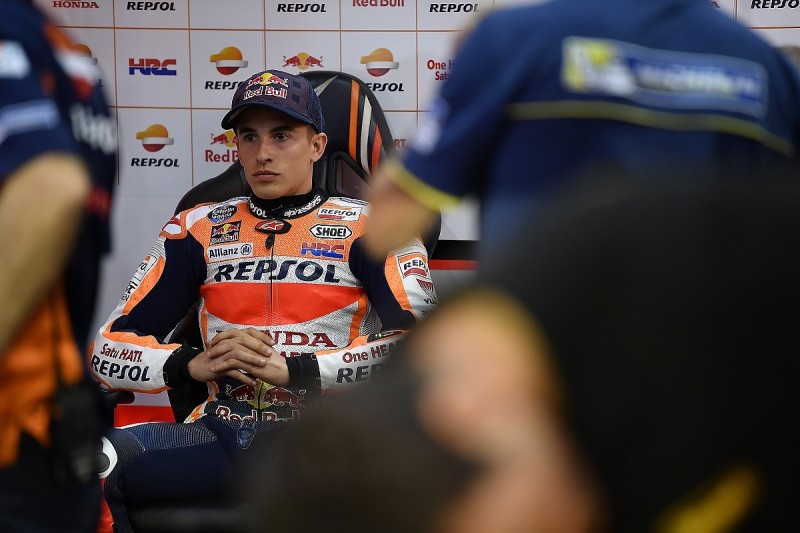 Marquez crashed again at Turn 2 late on the opening evening, and had to settle for the 12th-fastest time, 1.080 seconds off the pace set by Ducati's Andrea Dovizioso at the track that will host the season opener in a fortnight.

The 24-year-old said he was encouraged by the overall progress being made, nevertheless.

"We are improving quite a lot, we improved a lot on the electronics this winter time," he said.

"Of course Dovizioso looks one step in front of everybody but we must work hard and we are improving, we are still here for two more days and we need improve at this circuit."