Marc Marquez says he is disappointed in the collisions in last week’s MotoGP Aragon Grand Prix because he “felt ready” to fight after “an amazing start”.

The Honda rider was making his MotoGP return after a six-race absence to recover from a fourth major operation on the right arm he badly broke in 2020.

Qualifying 13th, Marquez leaped up to sixth at the first corner before his race unravelled at Turn 3 when he lost the rear and triggered a collision with championship leader Fabio Quartararo behind him.

This left debris in the rear of Marquez’s bike, which then slowed when he engaged his ride height device exiting Turn 7 – leading to collision with LCR Honda’s Takaaki Nakagami.

Marquez admits he was “lucky” that nothing serious happened in either collision, but was frustrated at the missed opportunity it led to.

“Of course, the target of Aragon GP was try to do some kilometres and finish the race, but unfortunately I just did one lap after an amazing start,” Marquez said on Thursday ahead of this weekend’s Japanese GP.

“I was disappointed especially because I felt ready.

“On the race pace I was not bad, it was my strongest point and I managed the tyres on that race track, I felt really good when the tyres dropped.

“But anyway, it’s like this and it was unlucky – but at the same time lucky, because in both situations we were lucky nothing happened.” 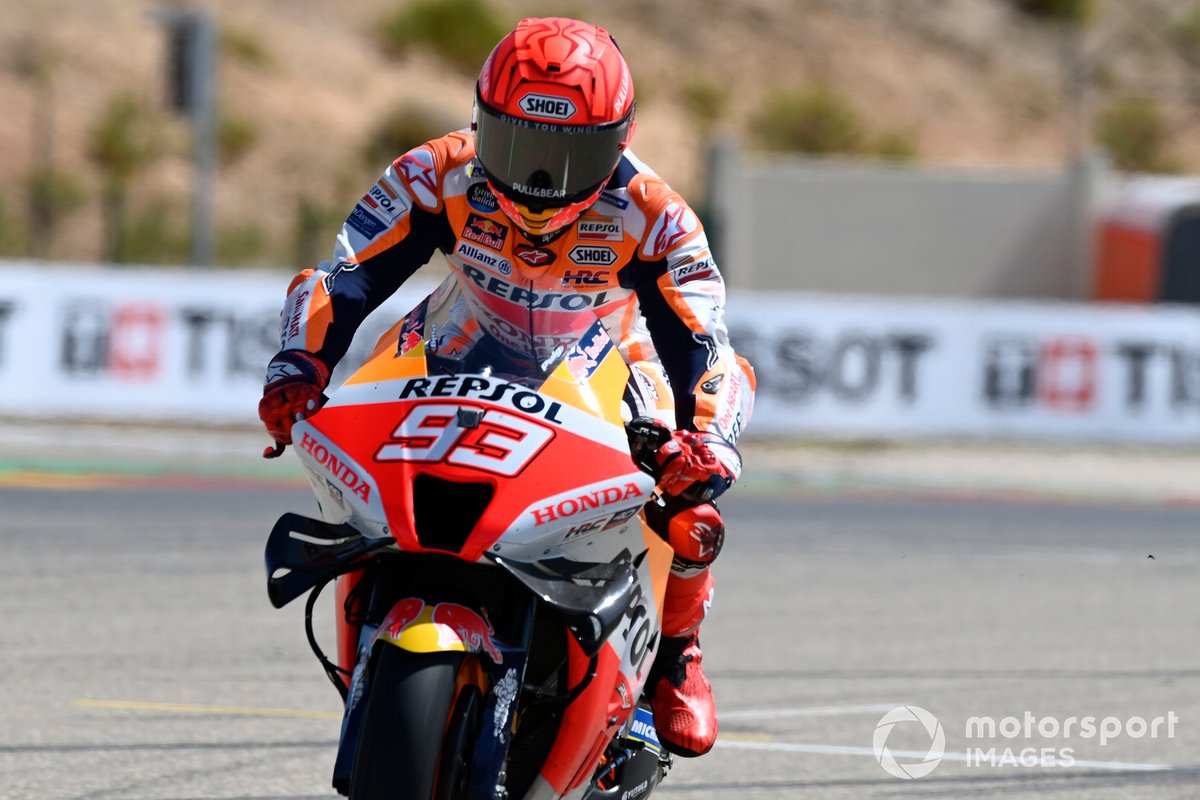 Marquez expects this weekend’s return to Motegi to be even more physically demanding on his recovering right arm, as he has not yet faced a circuit as demanding on braking with his current injury.

“Yeah, of course Aragon was already really demanding for me, especially because one thing is [riding in] the Misano test – but the intensity in a race weekend is different,” he added.

“And here in Motegi will be the first time that the right arm is given a big stress because there are many braking points, long brake points, hard braking points in right corners.

“So, I will need to manage well that situation. In Aragon I say that maybe on Sunday it will not be a problem; here, maybe yes. But I will understand when I will go out in FP1.”