Marc Marquez admits he is “angry” about the second of his crashes in the wet MotoGP French Grand Prix as it was “not necessary”.

The Honda rider ran in the podium battle at the start of the 27-lap flag-to-flag contest at Le Mans – just the third race of his MotoGP comeback – and managed to steal the lead from Fabio Quartararo during the pitstops at the end of lap five.

Marquez quickly put two seconds between himself and Quartararo after he emerged from pitlane, but his victory hopes were dashed when he crashed at the last corner on lap nine.

Re-joining the race, Marquez’s pace was faster than the rest of the field and he was on course for a strong salvage job when he crashed again at the downhill La Chapelle right on lap 18.

Marquez says this was the crash which disappointed him as it came while his mind was on other things and not the drying track conditions, while revealing at that moment he was going to box for slicks as he felt the circuit was ready. 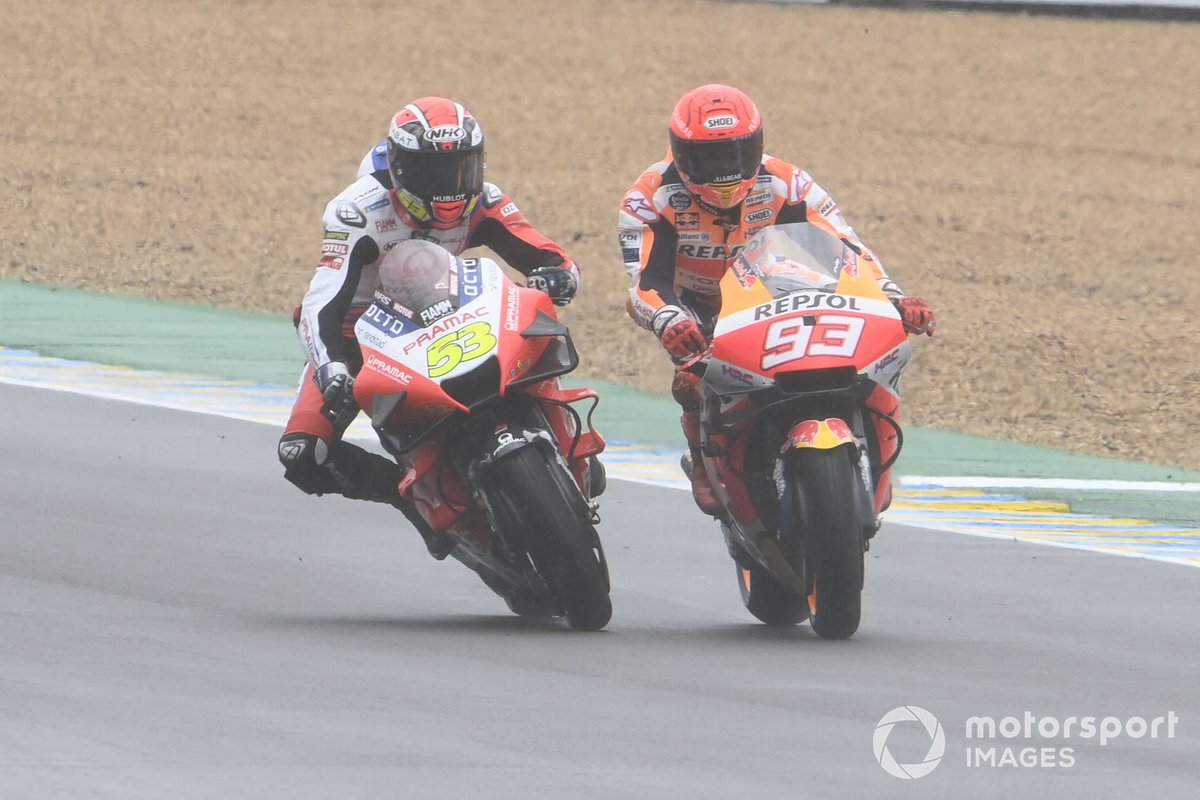 “I’m angry to myself because the second crash was not necessary,” said Marquez.

“I was more thinking about other things, about the position on the bike.

“I was just riding and I didn’t think about the track conditions.

“So, the second crash was something that was much better if I avoided.

“But overall the weekend was quite positive.”

When asked by Autosport if it was in some ways nice to be disappointed about losing a race win given his current physical situation, he added: “Yeah, I mean the point that I’m most disappointed about is the second crash because was not necessary.

“This was my fault and I was not able to control myself. I was not fully concentrated.

“I was riding fast, maybe too fast and the front riders were riding slower than me after the first crash.

“I was riding, thinking about the arm and other things.

“On that lap I just informed to my team that I was going into the box to change to slicks because the track was ready I believe.

“But anyway, it’s that. The second crash I’m disappointed about.

“The first crash, it can happen. Many riders crashed today and can happen.”

Marquez was one of nine riders to opt for the medium rear wet tyre at the bike swap, which wasn’t the ideal compound for the conditions at the point he crashed for the first time.

However, Marquez believes his choice was correct as the expected drying conditions later in the race would suit the tyre better.

He also acknowledged that his errors on Sunday were “part of the comeback”.