The championship leader crashed on Saturday morning at the Red Bull Ring's Turn 3 uphill right-hander, and visited a nearby hospital for checks on his shoulder.

He came unstuck closing on Dani Pedrosa, appearing to be caught out by his Honda team-mate's slower pace and line, and then high-siding in an attempt to take evasive action back to the outside of the corner.

Marquez missed the rest of the session, but was back for final practice then qualified in fifth place, and took full responsibility for the morning crash.

"It was a tough day for us as we began the morning session with a crash in FP3 that was completely my mistake," he said.

"I braked too late and went wide at Turn 3, risking a clash with Dani who was in front on the outside line.

"To avoid him, I crashed and I dislocated my left shoulder.

"I decided, along with the doctor, to go to the hospital to check that everything was OK.

"Luckily it was just a scare, and I was able to ride in the afternoon despite being bruised up.

"In the end, fifth place is good. The goal was to be close to the podium spots, and we succeeded in that.

"Tomorrow we'll try to get close to the two Yamahas, with the knowledge that the Ducatis have been faster until now, but we'll give our best as usual." 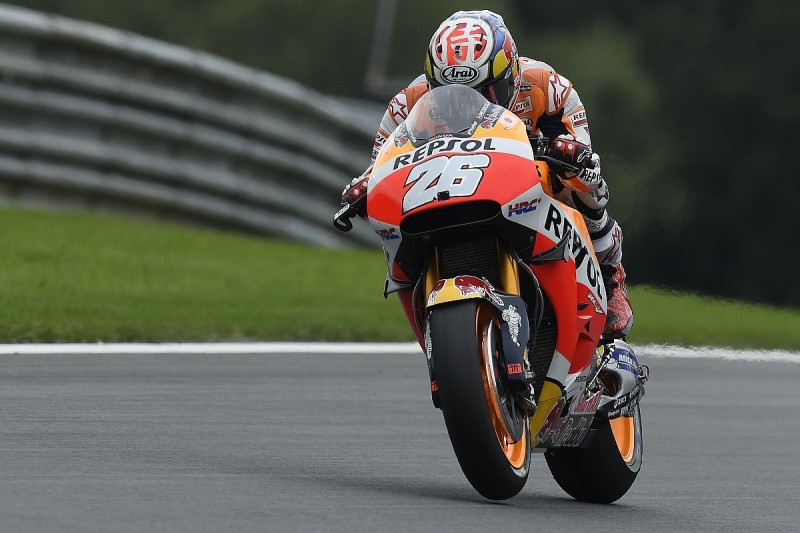 Pedrosa had a heavy crash of his own early in Friday morning's opening session, and finished the day in 19th, 2.515 seconds off the pace, admitting that his confidence had taken a hit.

Warmer conditions on Saturday helped, and he was within 1.121s of the polesitter Andrea Iannone in qualifying 12th.

"With today's higher temperatures, we were able to take a step forward from yesterday and I lowered my lap by two seconds," he said.

"Even if I expected a better result, we'll try to concentrate, get as much confidence as possible and be positive.

"We will look for possible solutions for the race; our intention is to go out and give everything we have and get references that help us to move forward.

"We want to improve this dynamic as soon as possible; the rider is the one who can contribute the most, so I want to do as well as possible."